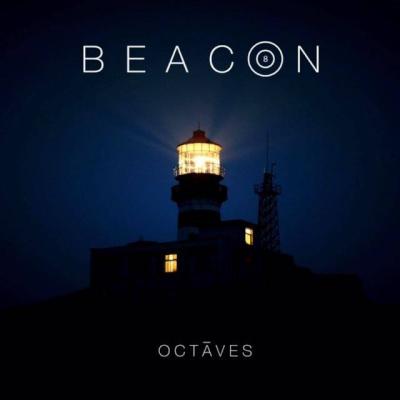 When you think about sexy singing, the Richmond Octāves may not be the first group that comes to mind, but let me tell you, the Octāves should. Beacon packs quite a wallop at the beginning, so much so that you are almost completely spent after the third track. Listening to this album is thirty minutes well spent.

The first third of the album encapsulates a budding romance. Opening with Kiss Me Quick, you get this ragingly hormonally charged R&B swagger that is amazing. I sat agog the first time I listened to the track for sing consideration several months prior to being assigned the album for RARB. It had been a long time since I was so enamored with a track like this. Everything about it works, from the intricate and driving background to Jorelle Montes's fantastic solo to the thumping mix by diovoce, the Octāves lay it all on the line. I couldn't wait to hear the rest of the album (the true mark of what it means to have a great opening track).

And then I hear Closer, which continues the great music and the total seduction that naturally follows the bravado of Kiss Me Quick, laying the foundation for a great night ahead. Even Wrecking Ball has this same element of anticipation (albeit in a very twisted sense, just go with it). Al Califano's take on the original is emotive and enrapturing. This version is one of the few covers that I enjoy of a song that I really hate. But that incessant "chew/chu" for "you" irrates me to no end.

The first (and only, from a thematic angle) misstep on the album is the inclusion of Over the Rainbow in the middle of the album. This bizarrely-performed jazz tune takes you completely out of the mood that the first three songs establish. Aside from the mood, this track has the least effective musicianship on the album. The multiple soloists are all over the place vocally and rhythmically. The arrangement does a disservice to the song. The superfast arpeggios and driving background leave the poor backphrasing soloist in the lurk. At times the struggle between the two makes me uncomfortable.

Retrograde is the saving grace for the second half of the album for me, though it does have a production glitch right at the beginning with the abrupt "ooo" cutting in to start the track. It should have had a smoother developing intro like Wrecking Ball. The atmospheric simplicity of the arrangement and the deft touch of the soloist align perfectly with the mood of the album and the aftermath of a messy relationship. The old adage "Less is more" is apropos here — letting the music speak for itself. It ties with Closer as my second favorite track on the album.

I'm so-so about the rest of the album. Beneath Your Beautiful is the next major misstep on Beacon. NEVER let your guest soloist out perform you on a track. It has already happened with Hannah Jackson's scat on Over the Rainbow, and now Naomi Sand not only nails the duet, but completely takes over the track.

Beacon is a really solid album. Again, it's a quick half hour that could make your day. The issues that I have don't take away from the overall enjoyment of the album. The production is solid, the singing is persuasive and endearing for the most part, the percussion is unobtrusive. I've been a fan of the Octāves since the days of Dave Raiser and company, and Beacon allows me to continue that love.

It's always fun to start listening to a new release and think, "Wait, they didn't use to be this good." Welcome to a new era of the Octāves. Beacon is daringly interesting. You'll be continually drawn to fresh voices, textures, patterns, passages, and sounds to admire from this group comprised of very skilled, risk-taking musicians who want to entertain and inspire.

If you're an arranger, you simply must own this little slice of paradise, which is not only really complexly imagined, but also still mainstream enough for people who love music of all stripes. The first two tracks are classic sizzlin' R&B. If that's your thing, you'll love the Octāves in action, though the source material does get a little repetitive. We then come to the knockout rounds, staring with CARA winner Wrecking Ball. Many male collegiate groups would take a goofy approach to singing Miley Cyrus, would they not? Perhaps change some lyrics and be silly sweethearts? Not the Octāves; this version will slice you to your core and leave you on the side of the road. There's an emotionally devastating lead from Al Califano; a bold arrangement from alumni Jared Feinman; huge sonic impact in Dave Sperandio's mix; and endless thanks from the a cappella community for making the decision to go against the natural grain for this one. From here, we transition to Tom Anderson's fiendishly difficult jazz version of Over the Rainbow, full of vigor and sparkle inside a demanding and evolving rhythmic structure. Try to stay on your voice part's line at home, why don't you; Octāves, did you shed tears and shake your fists while learning this one? It was worth it.

In the second half of a release I'd love to have twice as long, our highlight primarily stems from one man: Pierre Galloway. His voice is among the most striking I've heard in the collegiate scene, and we truly get a masterclass of his abilities in Recovery. He is so mesmerizing that you'll be spellbound by his performance. Wonderfully, he gets an encore in the epic grande finale piece Weathered, with different tempos and soundscapes and tricks and turns aplenty, but always Pierre Galloway, always right there pouring it all out and pushing the work to ever-higher points. I suspect this guy will have a long, happy go of it for the rest of his singing career. One other strong delight in the back-end: a wonderful collegiate collaboration with the University of Richmond Sirens on Beneath Your Beautiful. As this song uncurls into a beautiful mixed sound with a male and female duet, the arrangement continues to open and dampen, open and dampen, creating a rich offering that a male group alone could not summon. Collegiate collaborations are hot right now: RARB's 2016 Single of the Year went to a male group with a guest female on lead.

Here's my only sticking point, and only because the Octāves chose to write about it. To quote the liner notes: "The group wanted to put an emphasis on authenticity of sound and avoid over-production." Authenticity of sound? Absolutely, inarguably. As to the group's last statement, my very first written note for this album while listening to Kiss Me Quick was: "This is extra heavily produced." Largely, the engineering all fits the music choices. Is it over-produced? I know some in our community who will say yes.

Recording preferences aside, Beacon is awesomely created and performed. I love this new iteration of the Octāves and wish the group continued success.

Beacon by the Richmond Octāves capitalizes on the youthfulness and energy of today's music, resulting in a cool, slick, and impressive album. Each of the eight tracks is special, showing that the Octāves are no one-trick pony.

Kiss Me Quick is an all-out party, smooth-groove, dance-till-you-drop type of track. It establishes a groove from the get-go with a clean-sounding bass and rich percussion that cuts through the track. The 90s-throwback vibe is cemented by the harmonies of the backing vocals and added reverb, on top of the track's stellar lead as he fuses some Nathan Sykes soulful crooning with a Bruno Mars swagger.

Beacon can also appeal to more mature audiences with songs like Closer. The track has a strong soul or almost smooth jazz draw to it that comes across as more Robin Thicke than Corinne Bailey Rae. The arrangement does get a bit repetitive, leaving you wishing for a mid-song breakdown or another creative element. But the talent and range of the soloist help to keep listeners engaged.

Tracks such as Wrecking Ball and Recovery show off the power of the singers in the Octāves.

The group transforms Wrecking Ball into a power ballad that, in my opinion, is better than the original. The dynamic spectrum that the group covers is unreal, as they can command your attention even in the song's softest moments. With Recovery, the Octāves deliver a solemn and heartbreaking track that's the most convincing performance on the entire album. The backing group stays in-sync with the lead as both pace themselves throughout the entirety of the song, culminating in a four-minute-and-eight-second-long build-up full of effortless runs and strong singing.

What's also unique about this album is the Octāves' openness to collaboration. Both Over the Rainbow and Beneath Your Beautiful feature female musicians from the University of Richmond music community. Both tracks offer distinct elements not found elsewhere on the album: Over the Rainbow with its light-hearted and playful jazziness, and Beneath Your Beautiful with its gorgeous male and female duet over the reflective tone of the song, causing one to easily get lost in the music.

Retrograde is alluring with its gentle lead that commands the entire experience. The group's sound is so complete and well-rounded, with each syllable able to spark an emotional response. Weathered acts like a tug of war in terms of intensity between the backing vocals and the lead, which works wonderfully for the song. The song also has an abundance of layers to it as your ears are hit with everything from a choral opening to drastic switches between up- and down-tempos. The various layers truly take you on rollercoaster of feelings.

The Octāves are beyond their years with the themes, arrangements, and overall delivery of Beacon. This is not simply a collegiate a cappella group. This is the work of true artists.

A physical copy of the album can be purchased through PayPal.