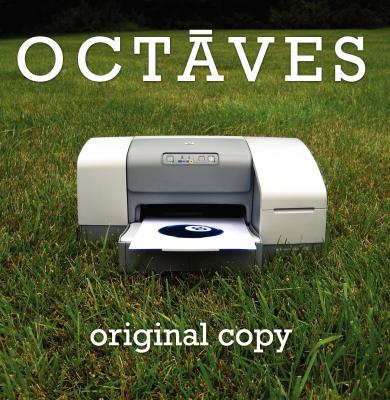 Notwithstanding the handful of collegiate groups that seem to be perennial powerhouses, the simple truth is that the attrition in any group's ranks caused by graduation makes it extra challenging to maintain greatness once achieved. Such, I fear, is what has happened to the University of Richmond Octaves, whose last two albums — Corner Pocket, which took me completely by surprise, and Shotgun, a more than worthy follow-up — had me very eager to check out their latest release Original Copy. Sadly, this third time is not a charm.

The one bit of unequivocal praise I can offer is that this album sounds terrific. The combined forces of Dave Sperandio and James Gammon have yielded a very forward, vibrant, crisp, clear sound with lovely balances between the voice parts and between background and soloist. Though the VP is noticeably (though expertly) sampled and rigidly gridded, that seems to be pretty much de rigeur these days. And while one might accuse them of getting a little "triangle happy" on Everything Is Everything and again on Bills, Bills, Bills, the fact remains that despite plenty of processing, the voices never lose their humanity, and that is no small feat.

But if production is my favorite part of the album, then that says something. Without question, the culprit here is the arranging, though the aforementioned nimble production work does well to disguise this weakness to the extent possible. Truth be told, the first and third tracks, Take On Me and Wake Up Call, gave me high hope for the balance of the material to come. Both of them feature nicely layered, uptempo opening motifs that incorporate some unexpectedly syncopated rhythms — really nifty stuff. Okay, so even on those tracks, the arrangements don't really go anywhere and have essentially been "heard" by the first or second iteration of the verse-chorus. But there's enough going on to keep it interesting and the overall effect is extremely engaging.

If only that were true for the rest of album, the Octaves might have had a fantastic trilogy of CDs on their hands. But instead, most of the rest of the material is straight-ahead, predictable, unimaginative renderings of repertoire that's a bit scattered. The arrangements get simpler, with lots of unison eighth-note rhythms and only the rarest of embellishments or deviations as each song progresses. Bills, Bills, Bills gets a bump in score, despite its endless repetitions, for bringing some musicality to what could have been a virtually all-vp hip-hop track. One Man Wrecking Machine fairs a bit better than others as its second verse shows some measure of development in the arrangement and Move Along's opening licks and energetic solo also elevate it slightly. But the rest feels a lot like fast food served on fine china. The presentation is beautiful and you enjoy it in the moment, but the food itself is plain, the flavor is lacking and a few hours later, you wish you had chosen more wisely.

Original Copy — that's an interesting title for an album coming out of the collegiate a cappella realm. Actually, with the stigma that has been attached to contemporary a cappella as an art form, it is very daring for a group to use such a quizzical expression to encapsulate their artistic endeavor. In the case of the University of Richmond Octaves latest recording, it's all too apropos. While it is a great album in a technical sense (hence the original), the album is reminiscent of several recordings that set the standard in the recent past (and that would be the copy).

The album has strong production values and a sonic appeal that keeps you listening to many tracks — if not the whole album — repeatedly. Everything Is Everything should be a strong contender for every award out there. And I hope I don't jinx the chance for it to get the recognition it deserves this year like I did last time I made such a prediction about an Octaves' song.

The arrangements are fairly strong. Arrangers Eric Rudofker and Grant Gardner especially shine. Not as ambitious as some of the songs during Dave Raiser's tenure with the group, but they have crafted an excellent landscape on which the group members play. The use of "doo" instead of "dit" or "da" during the intros to the verses to Take On Me was off-putting and a bit distracting. It just didn't work as a driving syllable and colored my overall enjoyment of one of my favorite songs. Conversely, Wake Up Call is arranged magnificently by Gardner. Much like Raiser, he has a knack for understanding the intricacies of Maroon 5 songs. The only drawback is that it sounds a lot like the transit-led a cappella camp weekend recording of the same song.

The song that forced me to listen to the album in a whole new context was Bills, Bills, Bills. Hmmm, a guy's group singing a song by Destiny's Child and leaving the original pronouns intact — reminds you of whom? Oh, yeah, Greg Binstock's tour de force performance of the same song on the Beelzebub's Next. Granted, I hope that Rudofker takes it as a compliment that his performance is being compared to Binstock's version because he does an admirable job with the solo. He doesn't have the same emotional power as his predecessor, but it is an enjoyable listen.

Take On Me could just as easily been the opening or mid-album uptempo track on the latest On the Rocks' recording The Green Room. Another solo by Rudofler. Could there be a possible graduate school application at the University of Oregon for this sophomore? Other direct comparisons include One Man Wrecking Machine and Black Water which are quintessential Dartmouth Aires-sounding tracks circa Black Tie Affaire. And it could be the relative geographical closeness to Harrisonburg that causes the similar aesthetic, but The Madison Project would have had a lot more fun with Ticks on any of their albums.

When the Octaves tread more on the original side of the album title, they truly soar. Gardner's subtlety on Warning Sign is just short of brilliant. Move Along is the kind of infectious earworm that will put a smile on your face for days. The aforementioned Everything Is Everything tells you all you really need to know.

A cute turn of phrase for an ending here would be to say burn a copy of the latest recording by the group and give the original as a present to someone to whom you owe a huge favor, but who doesn't make your top friends list on MySpace or Facebook. But that would be a bit too punny even for me. Get the CD. Be happy listening to some crispy clean a cappella and call it a night.

The last two Octaves albums, Shotgun and Corner Pocket, were very well received. Unfortunately, Original Copy is a step backward for the Octaves, without an "Aren't we smokin' good?" declaration and too much mediocre music.

On the praising end, Original Copy has a few songs that are complex and risky, and the skill needed to execute these difficult tunes is great. In particular, I speak of the songs which require an understated conviction, a style many groups struggle with as the results can teeter quickly toward the mundane. But listen to restrained Brighter Than Sunshine with its depth and creativity (love the "brown!" transition), and you'll hear the group's ability. Warning Sign and One Man Wrecking Machine also require understated conviction, and are successful, though not special, in their execution. Lastly, the skillful chops required to pull off such a controlled version of Take On Me is quite impressive.

But missed opportunities really pull Original Copy down. Ticks presents the most obvious issues, a cheeky country song with the punchline: "I'd like to walk you through a field of wild flowers, and I'd like to check you for ticks." As the song rolls on about the lead's various tick-checking efforts, the annoyingly loud snare drum, largely buried background singers, and quite tame delivery prohibits the song from moving into divinely goofy territory. Instead, the listener is left with a confused, "What the heck is this and why is it on this album?" reaction. Ticks strikes me as a song which requires over-the-top everything to be really enjoyable, and that's just not present on the Octaves version. Bills, Bills, Bills, originally by Destiny's Child, could be spicy and full of humor and charm, but is instead boring and empty. Finally, too quiet God Of Wine often sounds like it's being sung by a group half the size of the Octaves, and without growing builds or hard-hitting chords that would really benefit this rock ballad that currently needs a lot more intensity.

I was really hoping for that magic a cappella hat-trick of three outstanding albums in a row. Maybe, as is often quipped in sports, this is just a rebuilding year for the Octaves.

To order this album, visit A-cappella.com, or visit the group's website for ordering information.