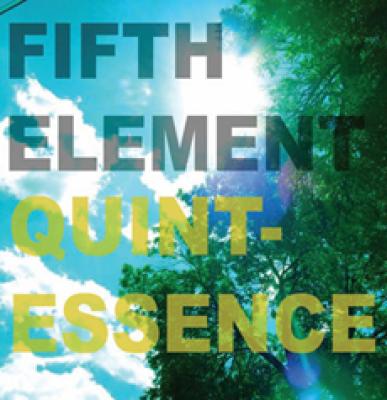 Before reviewing the core of Fifth Element's Quintessence, I'd like to briefly discuss their credits.

It's common for a cappella groups to credit leads, arrangers, vocal percussionists, recording engineers, producers and original artists. I am in full support of that. However, please remember also to individually credit all of the composers of the music and lyrics by name, as well as the publishing company, and the composer's rights organization (ASCAP, BMI, etc). Even if this crediting wasn't requested by the Harry Fox contract granting permission to reproduce the songs, it's still the right thing to do.

Not trying to judge here. I know it can be hard, nay, near impossible, to keep up with everything you're supposed to do in this life, musically and otherwise. Just trying to give a little PSA.

And now back to your regularly scheduled RARB review.

Fifth Element is that rarest of creatures: a collegiate group with a mere 6 members. 5e's members are all from University of Wisconsin Eau Claire and the group's been around since 1998. Quintessence is the group's sixth release, and it explodes with energy, creativity and compelling soloists. You wouldn't confuse this CD for a pro group's, but it's tough not to be swept up in the energy of the delivery and immediacy of the sound. 5e is immediately likable. They know who they are. Though they don't hit every bull's-eye, they aim for the right targets: pop and pop-crossover from R&B and rock. They sound right.

One benefit of 5e's compact size is that the listener isn't assaulted with 20,000 different parts singing 20,000 different vowels on every song. The typical "ahh+ooo+schweh+jen-JOE-A-Kennedy-AH+who-knows-what-else" gets tiring. 5e eschews that for a bit more lead+homophony+bass+VP.

Some arrangers will undoubtedly bemoan the lack of rhythmic and vowel complexity, but it's hard to deny that 5e gives the leads more musical room to actually sing the song (which they typically use to good effect). And since 5e relies on VP for its percussive drive, they are also freed from needing highly rhythmic yet distracting syllables in their arrangements. It makes for an album that you can listen to with non-aca-friends without having to apologize for goofy-sounding stuff that regular collegiate listeners just accept as part of the genre. (There are exceptions of course: Only One).

Yes, the sound is full. Yes, there are overdubs and sweetening tracks. Quintessence isn't a "live" or "live-in-studio" recording. There are often more than six voices. But you feel like this is a six-man group, just rockin' out. I can't imagine Home not getting audiences on their feet every time. Would it rock just as hard live? I believe it would.

Suggestions? Sure. Every few songs a soloist attempts to do something that they aren't that well suited for. Sometimes it's just a note or two, a short passage or so. Although, sometimes it's a fair portion of a song. Strained high notes, weird tone color, whatever. Either way, don't show us that. Nail it or skip it. Every line, every note. 5e's VP does drive the songs (Crazy has a nice little solo as well), but could be a little more in the pocket. It provides energy to be on the edge of the beat, but some songs need to lay back just a bit more. Blend just a hair more. This is as much a mixing issue as a singing issue. Watch when little descants stand out. Let some musical choices remain subtle. It'll give the songs more depth. And when making medleys, try to connect the songs musically, not merely shove them together (Queen Medley).

At the end of the day, even with their flaws, 5e just rocks. If you like them live, you'll adore this recording.

Initially, the latest release from Fifth Element made me giddy for several different reasons. After the happiness that was Blacks and Blues, I was hoping that this fifth recording was going to be just as stellar as that one. I really like the music that these guys put out, and I was hoping that Quintessence would surpass their last endeavor and correct some of the minor problems. Plus, I'm a total cartoon geek, so when I read the title I immediately thought about the Jetix's great tweener foray into Harry Potter realm with "W.I.T.C.H". The lead Guardian, Will, has the elemental power quintessence.

Unfortunately, that is not the case. Surprisingly considering there are only six guys in the group, the balance seems a bit skewed. Overall musicianship seems to have diminished since the last serving. Occasionally, they give off the impression that they have never song together before. Somehow, six untrained studio musicians came into a studio to record the album without ever seeing the music before the engineer shouted "Rolling!". It seems like this group decided that a more natural sound and un-enhanced production quality was preferred over any upfront studio trickery. And these guys just don't have the same chops as their predecessors did as evidenced by vowel matching and tuning faltering consistently, support in the upper registers wiggling and squirming on long phrases, and energy on through lines wavering like a Memphis brownout (or New York for those of you not familiar with the Mid-South's energy problem).

Some of the solo work leaves a lot to be desired. Some songs with a strong background don't have the same caliber of lead and vice versa. Case in point for the latter is Pete Elkin's turn on Case of You. His performance is like spun silk through a cashmere blanket, while the backing voices come at you like the rough side of a burlap bag. As well, Chris Goltz's delivery on Secret is delicious, but you'd be hard-pressed to much of it from the jumbled mess of an arrangement that he sings over — and a more apt descriptor would be "fights against".

Each of the songs is kind of ho-hum: There is nothing genre defining like Papa Was a Rolling Stone or as appropriately thematic as Together. Let Me Entertain You was better as performed by Brandeis Voice Male, Queen Medley was an interesting thought on paper, I longed for Invisible Men and their rendition of Waiting for You and Motown EC almost rendered the group's entire effort into a yearbook recording.

Two songs eke their way into further consideration at the end of the album: Stand By Me is definitely a great off-mike song for the group. Even with the tuning issues, you can fall in love with this song. And Crazy (squared) pairs two great songs in a creative and non-abrasive way. The arrangement here isn't as overblown as the background work in Secret or the poorly placed Take Me Home snippet in the middle of Home.

After my eager anticipation of listening to this CD, why did it leave me feeling like I was in an Alanis Morissette video?

It seems to me that collegiate a cappella groups have been getting bigger and bigger. More equals better, right? Bucking the trend, Fifth Element shows that small and svelte has its advantages too. Get six talented men together, add in awesome arrangements, and you have a recipe for a solid album.

When there's one on a part, everyone needs chops, and Fifth Element delivers with strong ensemble singing. Alex Collie builds a rock-solid foundation with his bass, with dead-on pitch, solid tonal quality, and nuanced musicality. The other parts blend well, forming a nice texture where parts rarely stick out. Tuning is mostly good with only a few rocky spots, especially in the Queen Medley. Solos are spirited and smooth. These men are clearly comfortable with their voices.

Where Quintessence shines is in awesome arrangements. Fifth Element does justice to Blue Jupiter's Stand by Me and Voice Male's Let Me Entertain Me, but the lion's share came from alum Tom Anderson. Anderson folds stellar arrangements into Fifth Element's strength of blend, creating interest and excitement without being overly busy. One of my favorites is Secret, where syllables, lyrics, suspended notes and moving notes mix at just the right rate. Anderson even works in portions of Sammy Hagar and The Eagles without sounding petulant. Such rich material provides the groundwork for this album's success.

Production is decent. The overall sound tends toward organic, if occasionally a bit compressed. Some nice effects are sprinkled throughout, adding interest but not detracting from the overall feel of the album. I especially like the full, bouncy bass lines and chunky percussion. I found the use of stereo effects distracting in many sections. In Iris, for instance, some of the inner moving parts sound like they are coming only from one side of the mix. While hearing the parts play off each other can be interesting at first, it quickly grated on me and detracted from the overall blend of the album.

Two gems really stand out. Home finds its groove right off the bat yet constantly builds. And Nels Urtel offers a righteous solo. Crazy is a fine ender. A full, throaty opening moves into a dense tapestry of good singing and interesting production. The Gnarls Barkley sections just can't keep up with Seal, but track is still top-notch. The low point is the Queen Medley that is just a bit too ambitious, both tonally and in the number of songs it attempts to cover in a short time. Motown EC is also weak, fun and with a high sense of energy but not musically well executed.

Fifth Element has lots of talent. At its heart, Quintessence showcases great singing and great arrangements — always a winning combination. And best of all, the guys sound like they are actually having fun. I'll take six energetic, enthusiastic, voices over twenty disinterested ones any day.