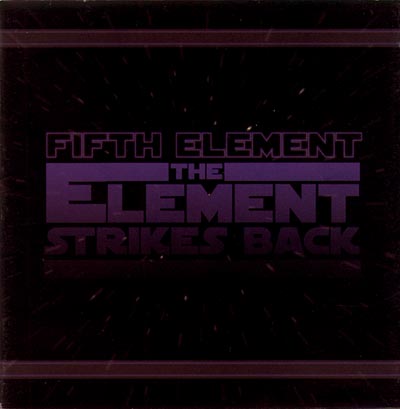 The Element Strikes Back is uneven terrain. High energy solos, sometimes solid, sometimes badly out-of-tune backups, consistently weak production, some machine-like vocal drum sampling and some impressive live-tracked VP. It's hard to know what to make of these guys. Long on talent, short on budget.

Fifth Element penned 6 of their 19 songs, not a bad showing for such a young group. Writing, leads and arrangements all reflect strong influences from early '90s pop-rock. It's a fun stroll through that era, even if it's out of favor on contemporary radio.

The production values (brilliance, clarity, fullness, warmth, lack of muddiness, stereo mix, etc.) and intonation drag down every track significantly. In all honesty, this CD probably reflects the genuine talent level of Fifth Element. Most groups put out CDs that reflect a kind of perfection that they are unable to achieve live. But compared to the general standards of a cappella today, this CD barely holds on to average ratings.

Fifteen years ago, Fifth Element might have been received as the hot new talent from the Midwest, but in today's ocean of auto-tuned, slickly produced recordings, a release this raw, though brimming with potential, is likely to fall short of most listeners' expectations. I'm sure these guys more than hold their own live, but they need to start some serious fundraising so their next CD can showcase their obvious talents as both performers and songwriters.

Fifth Element's The Element Strikes Back is an album with so much potential and so many problems. Every song is plagued with tuning and blend issues that pull this album down several notches from where it should be. The album is also far, far too long. 19 songs? The group would have been better served to cut down on the number of tracks and focus on perfecting those tracks. Six of these songs are original pieces, which is fantastic for a college album, but even that saving grace can't save this album.

With so many pitchy moments, it is difficult to enjoy this album. The solos and the backgrounds both needed work. These guys have a lot of energy and intensity. It is easy to tell that they love singing and are having a great time. But they need to focus more on listening to each other and making sure their harmonies are tight and in tune.

The highlights of this album are the contributions of Tom Anderson, the star of Fifth Element. He does most of the arranging, wrote four original songs, does most of the vocal percussion (which is very, very good) and turns in solos on Hallelujah and You Don't Treat Me No Good No More. He also plays piano on their one accompanied song, and guess what? He does a great job. Tom's original songs are dark, complex and sometimes haunting. Though the lyrics and music shine, these are songs that deserve clean blend and tuning.

This is definitely a yearbook album for the guys in the group, their friends and family. Everyone else should wait for the next offering from Fifth Element, because they are definitely capable of producing a first-rate album.

The Fifth Element is a 5 or 6 man singing group (depending on the year) from the University of Wisconsin at Eau Claire. They were founded in the fall of 1998 as an offspring of the much lauded men's chorus, The Singing Statesmen. The Element Strikes Back is their second CD. Strikes Back contains songs that many current college groups are covering, plus 6 cuts written for them or by one of their members.

The group has rhythm problems throughout the CD. Singers attack notes just before or just after they should have. Vocal percussionists are not leading the tempo of the song.

Finally, the production quality of this CD is less than I expected. Volume relationships between sections are out of balance, making the background singers louder than the melodic line. Several times I heard noises that should not have been present. There is even one large thud.

Now the good news: all of this is fixable. I am sure that Gary Schwartzhoff, the conductor of the Singing Statesmen, can help rid the group of its pitch problems. The same can also be said about vocal and percussive rhythms not being where they need to be.

Now the other good news: there are some fine cuts on this CD. On cuts 14, 15, 18, and 19, The Fifth Element created music. They sing the songs energetically. The songs move forward. Listeners and fans should enjoy these, as well as some of the others.

My advice to the group is to remember that recordings are unforgiving. Based on your web pictures, you command the stage in your live shows. I expect very few audience members at a concert would recognize the above problems. But you've got to be lot more precise when pressing your work onto disc.

CDs are $12 each or $20 for two. Please email howe@5emusic.com for current ordering information.