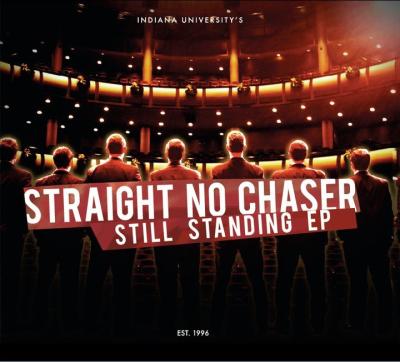 Straight No Chaser is one of those heartwarming success stories where the brotherhood of a cappella, the pure joy of singing captured the attention of the public. How the success of this reconstituted late-'90s group has affected the continuously operating collegiate ensemble is a confusing matter. Whatever the answer, Still Standing is an undeniable testament to the staying power of the collegiate group. But rather than bursting out of the gate, SNC is graceful and polite. Still Standing is a surprisingly mellow recording. It hardly reflects the kind of testosterone-fueled ebullience that was once the trademark of this Indiana staple.

Dan Ponce, original member, joins the collegiate version of the ensemble for an anniversary performance of the SNC theme. But though the voices are solid, the theme sounds even less edgy than when originally recorded. The goofy syllables don't bolster the swagger.

Phenomenal leads can compensate for dated arrangements and simplistic production, but SNC's aesthetic targets the very soft side of easy listening. The leads are smooth, dreamy, occasionally lovely, but not stellar, not stunning.

Considering how many voices are in this ensemble, the harmonic choices, the voicings, the density, and the phrasing are all extremely simplistic. The block blends very well, and the vp is tasteful and accurate. Down delivers some notable vocal pyrotechnics. But where Nota brought a Latin flavor to its most famous cover, SNC delivers more of a boy band charisma.

There's little wrong with Still Standing, but it seems more aimed those who complain that today's music is a noisy racket. The dulcet tones won't upset anyone, but most RARB readers will find that this recording is neither fish nor fowl; pop rock, but without the edge.

Have you ever heard a group refer to itself as "not your parents' a cappella?" If so, Straight No Chaser is the sound they're measuring themselves against. This is very much your parents' a cappella. While Still Standing may not have the track list that your parents enjoyed (the selection skews mid-to-late 2000s pop), the delivery is decidedly familiar. Kinda choral, glee-clubby sound with peppy all-male energy and doo-bah flavored arranging. It's business as usual, albeit business transacted with an earnest charm and good tuning, so it's hard to be too upset about it.

Just by that first paragraph, you probably know whether this album is for you or not. Do you cringe at the idea of "diddly dippy dow bow" as background syllables? Are you tired of standard all-male Top 40 tunes done pretty much straight up with a distinct choral bent? Don't want to hear another cover of Hallelujah ever again? Maybe skip this one.

On the other hand, if you like a big, warm, well-tuned sound mostly free of effects, Still Standing might just be for you! The vibe of this album is straightforward — these are voices, and the production makes no attempt at all to cloud this fact in the slightest. This extends to the vocal percussion as well, which sounds live and, well, vocal. It's a distinct sound, evoking heavily the aesthetic of yesterday. Yesterday's sound (voices just bein' voices) and yesterday's songs (really, another Hallelujah?).

Is Straight No Chaser yesterday's news? Nah! There are definitely still plenty of folks who will happily spin such an aurally pleasing, charming disc. There's something to be said for the timelessness of voices in harmony — pure, and untouched by the studio. The question is, are you a fan? If so, these guys do it well. If not, there are other groups for you.

Still Standing is one of those albums I feel like I should like more than I actually do. The singers are good, the production is good, there's a killer song ... but it falls flat for me mainly due to intangibles such as emotion and artistic expression.

Since it's a short album, I can actually step through things song by song. The album begins with Straight No Chaser, a jazzy introduction to the group. The continual ascending/descending bass scales are great, and remind me of one of my favorite a cappella songs, BYU Vocal Point's Pachuko version of Inspector Gadget. The melody is unremarkable, though, and the background party noise in the middle is quite distracting.

You Found Me is easily the best song on the album. Everything fits together nicely, and it's got the most expressive soloist on the album. The arrangement is top-notch, with interesting textured background parts that expose the soloist at just the right points. There's a subtle duet part in one section. There's subtle vocal percussion throughout, too — bass and snare — which also disappears and reappears at just the right moments. Plus it's just a really good song (original artist The Fray), and this is the first a cappella cover of it I've heard — always a plus. It's the only song on the album that leaves me really wanting more. My hat is off to arranger Owen Stevenson, a former member of the group.

Hallelujah has been done so often that my advice to collegiate groups would be to not put it on an album unless your version has something to make it stand out. In this case, the version doesn't — it's pretty much exactly as I expected, basically an all-male rendition of the well-known BOCA 2006 version by TakeNote from Clemson, and not substantially different from any of the five other versions already in my a cappella collection. The major difference from the TakeNote version, besides TakeNote being a mixed group, is the soloist. As I relistened to TakeNote's song, I was moved by the expression and emotion in the (female) soloist's voice. I couldn't turn away. Straight No Chaser's soloist, by contrast, is good, but not great. And not gripping.

Down is a medley. It starts with the '80s hit You Spin Me Round (Like a Record) by Dead or Alive. Actually, come to think of it, I think the lyrics more closely match the more recent cover by Flo Rida. Quickly, however, the song turns into Down by Jay Sean, made famous in the a cappella world by Nota on The Sing-Off. This is the heart of the medley. The third and final piece is Akon's Beautiful. Down and Beautiful blend together for a bit, but Down wins and finishes the piece. It's a clever arrangement, I suppose, but I just don't see the purpose for the medley other than to, well, be clever. It doesn't move me. In fact, I suspect I would have liked it much better if it simply had been a cover of Dead or Alive's song as I thought it was when it began — I've actually never heard that song done in the a cappella world before, and I quite liked where the group was going when it started.

We All Need Saving is like Hallelujah (although not so overdone): pretty good, but not great.

To summarize, then, these are quality singers and this is a very good album ... but to take the next step I think Straight No Chaser needs to focus more on expression. The group has the technical details down, but now it needs to work on connecting with the audience.