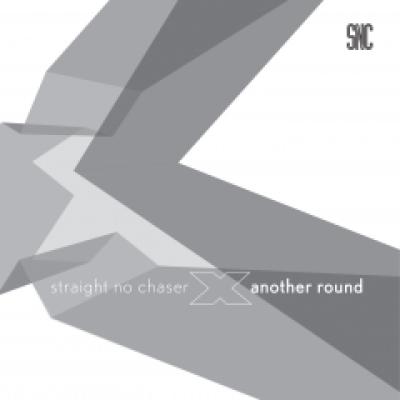 Straight No Chaser's current incarnation has a delicious groove. A steady stream of love songs, R&B and a few dance tunes is, in my view, a marked improvement over the latest ironic mosh track or anything by Coldplay.

Melody rules on Another Round. Many of the arrangements are full of old-school "doo"s. The bass holds down the sound, the backgrounds are full and the percussion never sounds complicated, even when it is. All of these things are lovely, and they mostly compensate for the less-than-perfect tuning. Yeah, you knew there was a catch, right? The chords often don't lock. Soloists and backgrounds sometimes clash at the ends of phrases. And in general, the music just isn't as clean as I would like in a studio recording from one of the best men's groups in the country. But back to the good stuff.

This album opens with an uptempo original, elegantly structured and with heft to stand up to everything that follows. Composer/arranger Tyler Trepp keeps up the good work throughout the album, tackling a varied set of tunes that also benefit from some good direction. Allentown has great drive and a well-suited solo, despite its tuning problems. I Don't Wanna Be stands out for a different texture than the rest of the album, and Wanderer has cool and intricate textures that come together seamlessly. Trepp even delivers a great solo on Play That Funky Music White Boy, the live track thoughtfully placed at the end of the disk. While I'm singling people out, arranger Jeff Tanski (a former group member) made some nice contributions too, especially his modern take on I Get a Kick Out of You.

I love that these songs don't all sound the same. I also like that the instrument mimics are good but not dominant — I don't have a problem with big choral "doo"s, especially on a ballad. Home has a great background along these lines, though it also has one of the disk's few subpar solos. On the other side of the spectrum, Corey Frye does a terrific job with Ordinary People, all the more remarkable because of its resemblence to the original John Legend recording (by collegiate a cappella's most successful alum, no less!).

Another Round is another nice addition to the a cappella scene. I am glad Straight No Chaser is dedicated to this kind of music, and I welcome its coming.

SNC has a formula that's been working for ten years now: a high energy blend of rock and R&B with aggressive VP, solid, genuine leads and arrangements that embrace block chords. That's collegiate a cappella the way I like it: enough complexity to interest, not enough to muddy.

Unfortunately, the guys don't quite hit a home run with Another Round. For one, SNC's intonation is all natural. So though it's often good, often isn't enough. Even some light autotuning would have gone miles in helping make these tracks more listenable from end to end. Mostly in tune rates as poor by today's standards. If you want to go 100% real (a laudable goal), you have to hold yourself to the highest of standards just to compete with the average release. That's just the way it is.

SNC's production kind of threw me on this CD. Maybe the effects choices were designed to cover intonation issues. Maybe they're just artistic choices that didn't work for me. In all fairness, it's obvious that quality equipment was used, the vocals are certainly clear and undistorted, and the VP and basses are often handled nicely (warm, punchy). But my lasting impression was one of distraction: too much reverb, too much chorus/flange, not enough clarity for a simple, crisp sound, nor enough layering for a wall of sound.

One credit to both production and SNC: this recording has life. So many recordings are perfectly intonated and slickly engineered but are basically a lifeless cut and paste job. Here, even through technical bobbles, the studio energy is a close match to the live tracks.

The two live tracks are the album's best. While technically inferior to the studio tracks, the overall impression is a better one. Whether it's the audience or the delivery it's hard to say, but the listener tends to forgive in this context what they damn in another. Unfair but true.

SNC has had a unique charm throughout its decade of existence. Though this release isn't a particularly strong one, that charm continues unabated. On the next release, SNC could easily rock the aca-world by maintaining their strengths (energy, charisma, arranging) and using modern technology (whether autotune or multiple punches) to handle intonation issues while adding a little more of a modern sheen to the production choices.

These guys are in it for the chicks. Another Round features smooth-voiced baritenors pouring their hearts into guy ballads. With a few exceptions, the album is the vapid, soul-infused pop of Ball in the House and Rockapella, with better soloists.

Straight No Chaser definitely has a type for its soloists. These guys are polished and smooth. They have voices clear as bells, with a silky tone. They never miss a phrase, but they often miss their pitches. Many songs have pitch problems, with soloists often going flat despite good intensity (September, Allentown, Ordinary People). All these guys can sing love ballads as easily as R&B or soul. Nearly all these guys are ballad baritenors or second tenors. The soloist voices are "one size fits all", and when I had finished my first several listens, I couldn't recall much of the album. It all kind of sounds the same.

A few things did stick in my head after more listening: the weird gospel tuning of Someday I'll Fly; the driving Blind Man's Bluff-like "dumbinitup" syllable and strident soloist of Superhero; the convincing steam whistle, cottony solo voice, and "dih dih dih" of Allentown; the wail of the tenor in I Melt; the rock/pop voice of the Penny and Me soloist, the urgency of the soloist "I like it like that" near the end of Play that Funky Music White Boy; and the cheekiness of My Hoosier Girl.

The rest of the album is still kind of a blank. Partly to blame is the homogeneity of the solo voicing, but the group also seems to stick with an arranging template. Most songs stick with variations on "doo" plus a solo harmony in the verse and "bah" with thicker solo harmonies in the chorus.

Maybe Another Round is consistent to a fault, but that consistency is universal. Choosing safe syllables and piling on the chords keeps the group's blend creamy. A well-rehearsed group, Straight No Chaser nails its entrances and cutoffs together. The vp ranges from beatboxy to rock drum kit, and the sounds and rhythms are appropriate and support the songs. The group is nearly always well-balanced, with chords spreading wide but never stretched thin.

So if you're living the coed life in America's midwest and you're looking to set the mood for romance, Another Round might be the answer. But the album is a soundtrack and not the main feature.

To purchase this album, visit the group's website. You can also email the group, or write the group at: