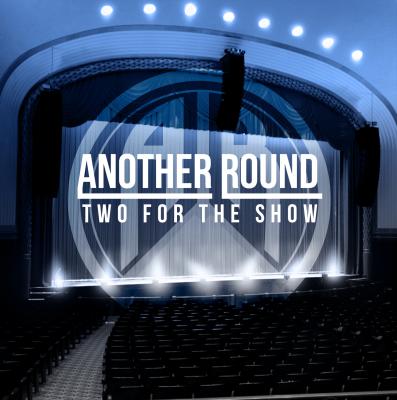 The name Straight No Chaser once identified Indiana University's premiere men's a cappella group, a group that made some fantastic recordings. Of course, members graduate and move on to real life while the next generation takes over the reigns. Well, sometimes.

After a ten year-old video gained wild popularity on YouTube, that old SNC "class" re-formed, re-recorded, and became a touring sensation. But for four years that left the world with an overabundance of Straight No Chasers. With each announcement, blog, article and comment, one always had to check: did this mention of SNC refer to the current pro group or the current college group? The 'net just wasn't big enough for the both of them. Thankfully, a new class of IU undergrads has stepped up to clear the mess. A grateful farewell to Indiana University's SNC, and reborn from the ashes comes the aptly named, Another Round.

Two For The Show explodes with a superstar solo from Brent Mann on Feeling Good. Impressive melismas never interfere with smart, effortless phrasing, infectious emotion and a tone color that rides the perfect line between pop and jazz.

This first track is just the kind of hard-hitting arrangement that gets a wow. Programming matters and Another Round knows just how to nail it. By starting off full of claps and stomps and tight cords and delivering great phrasing and production, listeners can't help but call themselves fans. And that is SNC tradition.

The only flaw here is over-tuning. As always, that's preferable to under-tuning, but on songs with as much heart as Feeling Good, the robotic color takes a little something away.

For better or worse, that sound is a permanent feature of Two For The Show. Computerized tuning works exceptionally well as an effect — the arpeggiated "doo"s of Clocks or You Found Me for example. But for the most part, it sounds fake, and that means the listener relies on the leads alone to provide the humanity.

Thankfully, Another Round's leads are something special. Ballads and slow grooves galore give these gifted gents ample opportunity to strut both technical chops and truly emotional performances. About half the album could really get you tearing up, and that's simply extraordinary in the world of collegiate a cappella.

Creativity is a double edged sword for Another Round. Georgia on My Mind / Gold Digger is undoubtedly novel, but it's one of the more awkward mash-ups you'll encounter this year. The arrangement just violently slams the dance hit on top of the R&B classic. Nonetheless, any deviation from yet another sound-a-like cover is one I'll support. Yes, the group even gets creativity points for Rage Mix which staples together any number of tunes, keys and tempos into a lumbering Frankenstein of a track. Still, monstrous beats boring any day.

Like many amateurs, Another Round's liner notes utterly fail to credit any composers. It's nice to know that Jamie Cullum inspired your version of Don't Stop The Music. But it's critical to know that the song was composed by Tawanna Dabney, Michael Jackson, Mikkel S. Eriksen, and Tor Erik Hermansen. Without Cullum, Another Round's version of the song might have been more techno-y and less emotional. Without these four composers, there would be no song at all! Plus, those composers are the ones who must get paid the compulsory license fees. Mr. Cullum just gets a thanks. Finally, failure to credit, in addition to being rude, invites unwanted speculation about royalties — something that doesn't reflect well on these extremely talented singers or their prestigious university, despite its prevalence in today's copywrong world.

All in all, Two For The Show is exactly the kind of head-turning kick-off this "new" group needs. Great leads, solid production work and a growing sense of its own, distinctive mark on the world of a cappella will make Another Round one of the gems of the midwest.

Often, I'm intrigued by the minutest of trivial matters. So, when this new album came across my desk and I found out that I was going to be dealing with a "formerly known as" situation, I was quite captivated. I do find it interesting that the collegiate group from Indiana University known as Straight No Chaser has changed its name to Another Round. Why is that interesting? Well, because there is an album named Another Round, which was released by collegiate SNC in 2006  — the year that SNC's 1998 YouTube video of The 12 Days of Christmas gained popularity and eventually lead to the Atlantic Records recording contract that started the need for the disambiguation in the first place. Circuitous, no?

With that bit of geekiness out of the way, I looked forward to hearing what the latest incarnation of the band sounded like. And so we have Two For The Show. Nothing stellar, but also nothing too divergent from the professional music that garnered the earlier group such high praise in the first place. And while I'm not disappointed, I'm not blown away either, which is a shame because Another Round has such potential.

The musicality is here. It goes without saying that talent abounds for this group. Enviable levels even. The deft production enhances, not masks the musicianship. Balance is superb and blend is unbelievable. (Studio tricks can leave remnants of the machinations of the producer.) And while I'm not the most adept at dissecting a track like fellow reviewer Alex Green's keen ear, what I do hear here sounds less metallic, more authentic, and reproducible — three elements that indicate the group's ability.

But what isn't here is soul and energy.

This is lounge-cappella at its best — a double-edged sword. Which is why an EP of the ballads Feelin' Good, We All Need Saving, Don't Stop The Music, Hallelujah and Imagine would have probably received a "5". These songs are safe, clean and atmospheric. Exactly what one can expect from an album that is pleasing but not necessarily excellent. Like putting on a Yanni playlist when you are too wound up to sleep. Most are performed with a soupcon of emotion that makes for appreciative listening and kudos from Michael Bublè fans. Unfortunately, they also come across as devoid of any spark of imagination or danger.

Though I will say that We All Need Saving and Hollywood's Not America are just short of being breathtakingly transcendent. They both made me say hahlellooo.

When that same style of music is applied to other more raucous tracks, the result comes across as a bit ludicrous. The ultimate failure being the ill-named medley (MEDLEY!) called Rage Mix. It is a funny, funny track and it is not meant to be. Nothing called Rage Mix should ever be described as funny, and yet with each subsequent listen I could not suppress fits of laughter.

Hollywood's Not America is the one mid-tempo number that overcomes the group's joyous schmaltz. I've never heard of the artist Ferras before, but I'm definitely intrigued thanks to the performance by Andrew Morstein. On this song, his voice tells a story. He rips the pathos out of each note and falsetto riff without ever going overboard. A true gift. What's baffling is that just six tracks later on Georgia On My Mind / Gold Digger he comes across as a bit too much.

Fans of the group will continue to be fans, and people looking for background music will enjoy most of the tracks. The album sounds good, but it's just not a good album in today's oversaturated collegiate male output. Six years ago, the album would have received a low "5" or high "4" easily. But now, groups with half as much talent can sound just as good if not better than most of the songs presented here. This group will never be mediocre, but I'll give them another round to see if the guys can become champions once again.

For a group of college guys, Another Round doesn't throw much of a party. Two For The Show lingers around andante, with flimsy percussion and too much reverb to ever get any punch out of the background. Whenever the group dares to venture into allegretto tempos, the arrangers get anxious and start slapping together asinine medleys that leave me wondering: "Why?" Fortunately for the album, the soloists and studio tricks are well suited for each song, and there are enough arrangement gems to warrant a few rounds on the playlist. But when an album comes from the legacies of the renowned Straight No Chaser, I expect something a bit more sprightly than what I got in Two For The Show.

I was actually hooked by the slow pace at the beginning of the album. Feeling Good opens with a clever vinyl filter, and evolves into a convincing big band style. Hollywood's Not America, We All Need Saving, and You Found Me hold down the rest of the first half of the album with nice development through the arrangements and buttery soloists. My only complaint with these tracks is that the percussion is poorly mixed, often cluttering the background instead of locking in the groove.

In contrast, Clocks and Don't Stop The Music put too much emphasis on percussion. Clocks is ugly; a dull arrangement with a dull soloist overpowered by an unrelenting sneeze of a snare. As for Don't Stop The Music, Another Round avoided the energy of Rhianna's version and the jazziness of Jamie Cullum's, and left us with only a lethargic mess of jerky percussion samples, soft snaps, and accelerandos to nowhere.

Then there are the medleys. Four of them. Down kicks off well, with the strongest vocal percussion on the album and the chorus of Down bouncing around the background. Then they kill the momentum with Beautiful. Kiss A Girl / Kiss The Girl is catchy but Kiss The Girl puts the cheesiness just a touch over the top. Georgia On My Mind / Gold Digger is so inappropriate it could almost be a joke, but they drag out the Georgia On My Mind far too long to be humorous. The Rage Mix starts with some clever transitions and a fantastic Pitbull segment, but Andrew Morstein backs down from the party atmosphere with a subdued choral conclusion. Medleys are opportunities to showcase originality, but Another Round loses big creativity points for ruining perfectly fun arrangements for the sake of mashing songs that had no business being mashed.

Lastly, there are even slower songs. Hallelujah has been overdone for some time now, and Another Round doesn't do anything to make me want to listen to it again. Imagine crawls along with some nice wind sounds, but none of the raw emotion that makes Lennon's version so touching.

Two For The Show is not bad, but it's not great either. You could buy an album from any male collegiate group with a decent budget and get a similar assortment of nice solos, pop medleys, and school-specific humor. Usually, however, you can find an album with at least one solid rock-out number that gets your heart rate going. Hopefully Another Round has gotten all the melancholy out of its system, and will get to work on a new crop of arrangements to really get the party started.

CDs are $15.00 plus shipping. To order your copy, contact the group at: