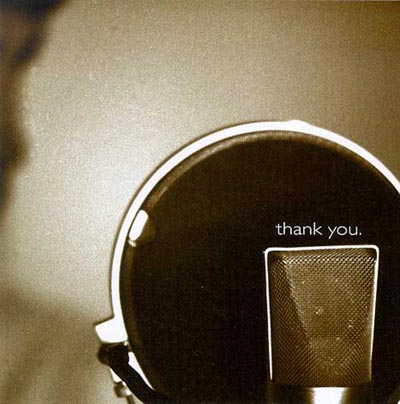 A cappella is on the verge of becoming a closed ecosystem, if this new Straight No Chaser album is any indication. Out of 14 songs, three are covers of pro a cappella groups, one is an original, and two more come from so many generations of college a cappella that they might as well be home-grown too.

That leaves little more half the repertoire for new blood, and it gives new meaning to what it now means to be a cover band. I'm getting dizzy just thinking about it. The good news is, it's another nice album. Not as good as Last Call, but darn nice, and if you're into this sort of thing, you'll want one. If you're new to this sort of thing, you might also want one, which is good. Those of us who are into this sort of thing probably already own m-pact, spiralmouth and Rockapella records. But we don't have any other records of Michael Itkoff and Dan Ponce's The Time Has Come, and we'll want that too because it's damn good.

Anything from Dan Ponce is good. We at RARB blame him for SNC's past wild success and upcoming credibility problem. Now that he's moved on, his former group will forever have to live up to those first-blush halcyon days. This group, for instance, has slightly spottier tuning and lacks the charisma of its predecessors. Still has great voices, though. Mark Holloway does a lovely turn on Babylon, a song otherwise lost in its own reverb. Oscar Banks and Ryan Stoudt help Thank You launch the album, and Ryan Ahlwardt gives many a respectable turn.

The one thing this group doesn't have is a light touch. They bear down everywhere, when it works and when it doesn't, and even the sparse arrangements sound weighty. This works to varying degrees with most of their repertoire, but it sinks the old standard Return to Pooh Corner, which requires a light touch above almost all else. Fortunately, we a cappella fans already have this song recorded by somebody else.

I don't know what they put in the Indiana water, but album after album, despite the natural changes in collegiate membership, SNC delivers some of the best soloists in a cappella today. And they're backed by a groove machine of an ensemble, laying down radio-ready R&B-pop arrangements. And the production is beautiful. And the arrangements are so laid back and cool. And the VP is right in the pocket without ever being distracting.

Yes. You can read the rest of the review for specifics, but I suggest you use your time more wisely: just go out and buy your copy.

One rather amazing SNC strength is their ability to improve on their covers. The Boyz II Men classic Thank You takes a turn for the better with the smooth R&B stylings of leads Oscar Banks and Ryan Stoudt and somehow hits a pocket that the original aimed for but didn't quite hit.

SNC also takes on the daunting task of covering a cappella originals by studio-slick groups like m-pact, spiralmouth and Rockapella. The results of the latter two are excellent, but successfully covering a Scott Leonard lead demands special note. Michael Luginbill and Ryan Ahlwardt are just unbelievable on I Am Your Man. Frankly, it's hard to believe that these soloists could possibly be college students.

Thank You is a little front-loaded though. The Way It Is is still good stuff but it starts a run of ever-so-slightly less impressive tracks. Many are still 5s, but not quite as tight as the blow-you-away openers on this CD. Notable exception: the terribly sentimental, but very musical Return to Pooh Corner.

Summary: The worst is really good; the average is great; and the best is the best anywhere.

For the past few years or so, IU's Straight No Chaser has been one of the leading men's groups in the country. It comes as no surprise that their latest release, Thank You, features the marvelous blend and outstanding solo voices that have characterized their past efforts. Yet, I am curious as to why a group with such an elevated reputation would have so many areas needing improvement.

I'm proud to report the good news for SNC (and everyone else interested in hearing this disc): There isn't a single song on Thank You that 95% of collegiate groups wouldn't be proud to include on their own disc. No weak links. That's something to be damn proud of.

Yet, it was hard to decide between a 4 and a 5 for this album. With the album scores split down the middle between 4s and 5s, my only solution was to use the individual track scores as a tiebreaker. While most of the songs on this disc are good (often VERY good), I'm sad to report that there are only a few excellent, memorable songs. SNC's take on Bruce Hornsby's The Way It is is alone worth the price of the album. Mark Holloway's solo fits the song perfectly and the background blocks are rich and full. Another winner, Outstanding, is, well, outstanding. SNC's version of spiralmouth's Hush takes the rock-out ballad to intense heights.

Speaking of professional aca-covers, one of the biggest problems with Thank You is that there are too many of them. With the exception of Hush, the inclusion of Boyz II Men's Thank You, Rockapella's I Am Your Man, and m-pact's Without Your Love, results in some unfortunate comparisons and inevitable shortfalls. There is room for one seminal a cappella cover on a collegiate album — not four.

It's too bad that SNC chose to hide their fantastic live version of In the Still of the Night as an unlisted track. A creative, skilled solo by Brian Kelly (who, sadly, is uncredited in the liner notes) and a solid group blend and feel make it one of the album's best, despite the over-covered song. I can see why SNC would have felt strange putting one live track next to thirteen studio cuts, but this one is hardly plagued by the typical shortcomings of live tracks. It's too bad listeners will have to have to hit fast-forward each time they want to jump right to it.

I expect this album will be one of the best men's album's this year. Quality runs thick, despite the shortcomings mentioned herein. A worthy buy for all but the pickiest aca-palates.

For current ordering information, visit Straight No Chaser's web site, or send email to snc@indiana.edu, or write to