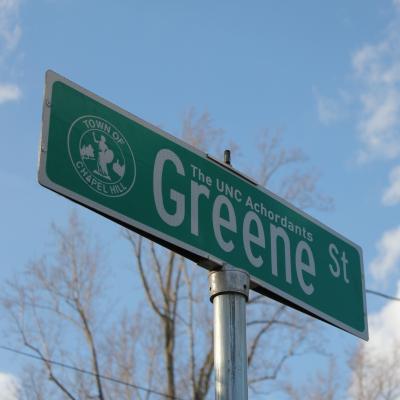 The Achordants must have had a lot of fun making Greene St. They sing with energy and charisma, breathing life into their chosen mix of faithfully rendered radio pleasers.

Song and singers seem well matched throughout the disc as the Achordants navigate their way across a range of styles. Rock, check. Rap, check. Ballad, check. Sprinkles of soul. I liked Home and We All Need Saving the best, since they reflect my favorite styles of stomp and croon. Other listeners might just as easily gravitate to the disc's more urban tracks. The superficial breadth of genre felt unified by a commitment to mass appeal in, say, the same vein as global pop stars who release their albums mixed in pop and international versions.

Even the medleys have been focus-grouped. The Super Mash Bros pre-selected the pop tunes smashed up here, copied right down to the authentically out-of-time "make you a celebrity" spoken hooks. Call me old school, but I could only reminisce fondly for the days when college students made their own remixes out of Jackson 5 standards. Likewise, the adapted "wade in the water" borrowed bridge in Home is moving. And pre-cooked.

So it's a pleasant album, and a worthy souvenir of some probably pretty nice parties. Listeners who approach it in that spirit will probably get their money's worth.

The UNC Achordants' Greene Street is a little looser than your average collegiate release. And just like in dating, a smidgeon of looseness can be a good thing. The group's first track, All the Pretty Girls, actually sounds like a memorable night at the bar: energetic, happy and just a bit slurred. It's a surprisingly enjoyable start.

Throughout the album, more than a few soloists get to slide around, and some of the back-ups don't always lock, all of which preserves a little humanity in a genre renown for setting up camp in the uncanny valley. Here, a few voices stand out for their distinctive character and a few arrangements stand out for their creative twists. Sometimes this sounds like the heroic triumph of vitality over technology; other times, it's just sloppy. On balance, upping the humanity is a compelling choice that makes for good repeat listenability.

The Achordants' standout arrangements are C'mon and Talk and Sincerely Jane. Both display great use of space and tasteful effects, combined with a good use of simple syllables to drive the song without distracting from it. (I'd compliment the arrangers by name, but they aren't credited in the liner notes.)

By contrast, Little Lion Man suffers from a piranha attack of "ch" sounds; Black and Gold from bouts of unfocused busyness;  Jealous of the Moon from too much variation, when less would have been much more emotionally effective; and Jessie's Girl from over-enunciation of nonsense like "jabba dah" and an eye-rolling "guitar" solo. These aren't bad tracks, but they seem arranged more to keep the singers entertained than to tell the stories behind the songs.

Super Mash-Up deserves special attention as perhaps the most "meta" a cappella track in existence. It's an a cappella cover of mash-ups of raps altered to be more self-referential over a cappella versions of the largely instrumental sections of sampled songs. That's like a modern adaptation of a collection of snippets of quotes that are altered to be partially about the author. Beyond the dizzying ramifications on post-modernity, the track is also tons of fun.

Legally and credit-wise, the Achordants could benefit from a thorough refresher on liner notes. The most serious offense: they don't list any of the composers on their album. But as of this writing, the group's website isn't any better: the Achordants sell written arrangements of these songs, seemingly without payment to, or permission of the composers. Ironically, they also "kindly request that you acknowledge the group and the arranger wherever you may use these arrangements." So, the Achordants, who don't credit their arrangers on their album, nonetheless suggest that all Achordants' arrangements made without permission should get credit, but not the composers who wrote and own the copyright in the songs? It'd be funny if it wasn't so tragic. Thankfully, the group earns back a few points by making their CD packaging from recycled board product.

Greene Street isn't exactly a must-own, but the Achordants are a group on the rise, and a playlist that included just their best tracks would please many a listener.

I expected a lot and got baseline average with Greene St. Energy and intensity are lower than usual this round, which is really, really hard to overcome when the Achordants built a reputation on being awesomely high-energy guys. In my review of A Refreshing Glass of OJ, I wrote the following: "One thing I've always liked about the Achordants is the group's passion to sing the heck out of everything, as though each note has a bold accent mark over the top and there's a crescendo waiting at the end of each bar." Sadly, not this time.

There are also multiple instances of good concepts that weren't executed as well as hoped on Greene St. C'mon Talk was an excellent track to select for its cool rhythmic pattern and catchy melody and could have been a signature piece, but the repeated "rh-rh-rh-rh-rhythmical" bit that's supposed to be slick sounds kinda weird after awhile. Singing much of The Other Side in super falsetto probably seemed like a good idea to rock it, but boy, it's a difficult listen. Throwing back to Jessie's Girl seems fun if done in a rip-'em-up, shred-'em-up style, but here the syllables are silly, energy is absolutely absent, the drums sound awkward and quiet, the guitar solo sounds super awkward, and even the breath placement doesn't sound right. (I wish there were a gentler way to be specific.) Ending with an upbeat mash-up that has lots personalization and swagger on paper should be fun too, but there just isn't enough sizzle to carry Super Mash-up Medley.

Moving in another direction, I like the bass section here a lot — so rich and powerful — but the basses are singing too many wide-mouthed syllables. It doesn't have to be super dull to be a bass and sing closed "dm"s constantly, but largely, yes, I think bass sections should be pretty much closed-voweled and focused on adding musicality and atmosphere through dynamics and tone. In this regard, it's the hardest job to be a bass — that's why hot bass sections are so noticeable to a cappella junkies: they do a lot with what is given to them. Arrangers, Sebastian Rilton from the now-defunct Riltons vänner is an inspiration to basses everywhere. It never hurts to study the best if trying to be the best.

On the plus side, there's lovely ensemble singing on Greene St. The blend is rather beautiful throughout. And soloist Ben Barge on We All Need Saving has an incredibly smooth and lovely voice that I'll be coming back to.

But overall, I'm left disappointed because the party was just too tame.