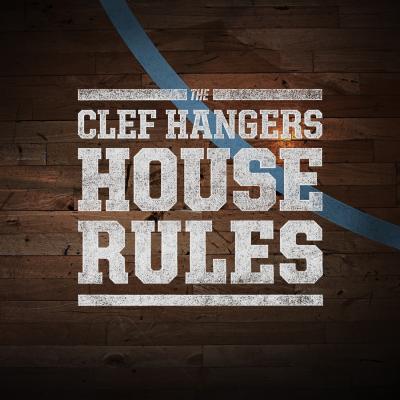 Being a UNC Clef Hangers fan for almost a decade — or more specifically, a fan of their recorded work — has typically required me to focus on the whole rather than the individual parts; to ignore, or at least subordinate, certain artistic and/or technological choices the group and its producers/engineers have made to the reality that the musical end product was still first-rate and most enjoyable.

House Rules, however, is the first time in a long time where no matter how slick and polished and clean their sound, the Clefs actually left me a bit bored. And that's not a word I've ever associated with this group.

To be fair, the album starts very strongly, with an energetic take on Animal that has a lot going on, all of it effective and engaging. There is a bit of mechanization to the sound which isn't helped by the choruses sounding a bit "cut-and-pasted" — almost as if they weren't actually performed three separate times. But harkening back to Clefs' releases of old, the whole is greater than the sum of parts and it's a track that grabbed me from the start and kept me interested throughout.

Wish that I could say the same of the next two tracks. Don't get me wrong: they sound lovely. And if you're a fan of these songs, I suspect you'll be a fan of these versions. But Never Say Never pretty much just sits in the same place for four+ minutes and the same is true for Warning Sign until about 2/3rds of the way through the song. The arrangements are faithful, to be sure. The performance and blend is appealing. The soloists are solid (if not spectacular). But somehow, the whole in this case is ultimately uninspiring.

Indeed, those last three sentences became something of a refrain for me in considering most of the rest of this album, which takes a turn towards the theatrical/cheesy — two words I've also never associated with the Clefs — at track number five. Haven't Met You Yet replicates the source material musically and the faux-horn ensemble towards the end is cute, but the plodding, "doo-dah-doh" arrangement is even squarer than the original. Water Runs Dry is a slavishly faithful cover which probably deserves the most credit for doing reasonable justice to the melismatic solo. But as the original is primarily voices plus a percussion track and this version is much the same, the point of its inclusion/performance is a bit lost on me beyond extremely capable mimicry. Africa is a legacy song for the Clefs that has been in their reportoire for nearly 25 years. But even with updates from Brannon Wiles' original — which was a pretty hip arrangement for its time (1990) — this chestnut is showing its age. February Song is by Josh Groban so my theatrical/cheesy comment is probably understood. Suffice it to say that even as good (and similar to Groban) as Ryan White sounds on the solo, block chords with some gentle movement can only hold my interest for so long. Just the Way You Are offers no surprises either and Hallelujah just has so much baggage at this point that it's an uphill climb for any group. Certainly in this case, having it evolve into what feels like a generic 80s rock ballad — albeit a very pretty, nicely harmonized one — does very little to elevate this rendition above its seemingly innumerable predecessors.

You'll note, of course, that even with all this disappointment, my scores for House Rules are still quite strong. The fact is that the Clefs have not made a bad album. They've definitely done better, but between the energy in the performances, the tight blend, and the excellent production work from diovoce, this is still a cut above a fair amount of the rest. I'm still a fan, but like the Brooklyn Dodgers fans of the '40s and '50s, I guess I'll have to "wait 'til next year".

The seasoned Clef Hangers pump out something legendary with House Rules. It's like a perfect date made into a album: lots of lush layers, lots of heartfelt emotion, and that certain really enjoyable quality that makes you want to come back to it all over again, and again, and again, repeat forever. Can I live inside of a CD? Because I don't want to come out of House Rules.

This is a knot-in-your-throat album. I have never heard such exceptional phrasing and expression and musicality and just everything perfect and vulnerable all at once from a collegiate group. It's hard to highlight when the group never stops giving, but I'll give it a shot. The pining and pull-on-the-heartstrings feel on Never Say Never is so genuine that I'm in disbelief, and it's echoed again with the similar style of February Song. Half comes from the intense push and pull phrasing from the block, and half from the frontmen, all of whom on House Rules carry a blooming rose in their hands. It's pretty hard to imagine out-singing the leads on this album; dear Lord did these guys show up to the studio to lay it all out. Big example: hello total style and substance from the gentlemen trading off on Hallelujah. It's not overdone if you really rock it.

Energy is a never fleeting go-get-'em style, with plenty of pounding drums, wailing vocals, and sharply punctuated dynamics. Don't you love it when a cappella groups shape phrases, crescendo over bar lines, and explode into choruses? Because I sure do, and so do the Clef Hangers. Listen to and love this approach on Haven't Met You Yet and Water Runs Dry, and see how you can turn well-covered material into something special. And here, the ultimate test of turning well-covered material into something special: Africa is so shockingly amazing, so full of reinterpretation and on fire with energy, that I nearly cried with delight when I heard it the first time here, and I still can't sit still for for it. Get this: it's Africa with a tribal beat and tribal syllables (genius right?). I'm a mother so I can't really swear in my reviews, but I really want to, because this one deserves a really excited expletive. What reputable group touches Africa these days? THE CLEF HANGERS, AND THEY NAIL IT. Though hey, they've been perfecting this one for over twenty years. Get out! And yeah, maybe you recall that they sang it on Breeze, and the other reviewers were not unanimously impressed, and oh yeah, it's showed up on a few other Clef Hangers albums, too. Well, I'm totally impressed here in 2012.

There's strong and compelling production from diovoce for the bedrock of House Rules. But the Clef Hangers bring plenty of vocal creativity to the table too (listen to their closing remix; gotta love the line "Don't like my girls in sneakers — prefer Tar Heels"), and as I've already gushed about, when you bring this level of musicality in, the rest is all cherries and sprinkles and an album that's gonna stand up on its own legs for a long, long time.

If House Rules had come out in the year or so after the release of the Clef Hangers' previous release, Twist, it would have likely been received with the same praise and lauding. Three years later it's still good, but doesn't have the same "holy crap" factor. This album is still unmistakably Clef material — it's slickly produced from start to finish by Dave Sperandio, it sounds full, and the singing is energetic. However, nothing quite transcends the good into the "left me speechless" category.

The Clefs nail the sensitive bro rock album, though, and the track listing reflects this. There are some missteps (really guys, Africa on an album coming out in 2011?), but for the most part they've got their demographic — their moms and the cute girl down the hall — down pat. This feels like a summer record, too — the meat of the album has plenty of songs that make you want to go outside with a bucket of wheat beer and a volleyball and sit on a beach for a day or five. In fact, since, as of this writing, it is summer, I might go do just that.

The overall sound of the album is typical of Sperandio and the Clefs at their best — nothing ever feels empty, and at best sounds so densely packed you'd be hard pressed to pull out an individual part with your ears (in a good way). The atmosphere of each song is perfectly appropriate, and enhances every track. When all these factors come together with a good arrangement and some really effective singing, you get a song like Water Runs Dry, which is easily the best on the album. Call me a sucker, but even for a pretty much note for note transcription, this song is great. The backs and lead are all singing in the perfect style for the song, and that commitment to the mood is what makes the song.

No other tune quite hits the sweet spot of atmosphere, performance, and committed singing. Some definitely come close — Animal is appropriately angsty, but the backs aren't quite at the same intensity level as the soloist. Warning Sign's atmosphere and solo affect are near spot on, but the backs don't keep me interested through such a long and meandering piece. Even Hallelujah manages to stay interesting, but the song choice itself is so tired; you have to do something drastic to make me say "wow", and the Clefs version is really well executed but doesn't tread dramatically new ground. Other songs aren't quite there. Haven't Met You Yet is always going to sound exactly as you expect it to, as will Africa, February Song, and Just the Way You Are. The last of these three even has a really difficult, stratospheric tenor lead, but soloist Phillip Bouché sometimes sounds like he's concentrating on hitting notes instead of heartstrings.

The real issue I have with this album is this — while the Clefs have the "easy to listen to" criterion down, they've missed the mark a bit on "exciting to listen to" on a few levels. Often the group relies too much on the soloist to carry the tune, so either the backs sound a bit uninteresting, or the song falls flat if the soloist can't sell it all on his own. Also, the overall sound seems somewhat dated — rhythm function is given almost entirely to drums and bass, and the backs are often block chords. While I'm sure they were a hell of a lot of fun to mix, I didn't feel anything on the arrangement or vocal performance front that made me say "whoa". The Clefs clearly have the chops to pull off mind-blowing albums — next time I want to see the full-on commitment from them all the time, through an entire album.

Physical copies of House Rules can be ordered from www.clefhangers.com. Digital copies can be downloaded from iTunes.