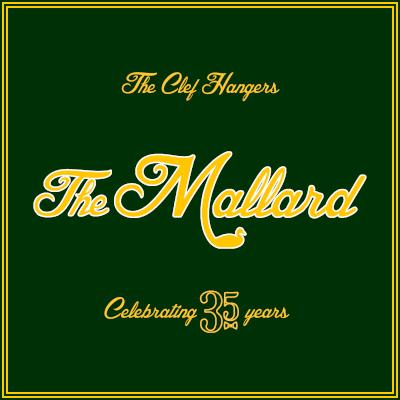 The outside of The Mallard is all green and gold and elegant and full of majesty. Inside there's an old-school duck fabric print and a vibrant photo of a couch sitting on a green lawn on a sunny day. That clear blue sky, that fresh air, is the best part of this new disc but it took me several listens to find it.

Great voices, good sounds, and lots of effort have brought the Clef Hangers an album to be proud of. The songs are nice and the soloists are good, sometimes great. I loved Cole Hammack on Gravity, although I'm not sure we needed it twice. I know we didn't need any more a cappella Coldplay — Paradise feels as pedestrian as good a cappella gets, a mailed-in wall of loudness to start us on our merry way. All the songs on this record are loud, and all are compressed and mastered and made to sound extra nice.

This sameness is actually the best argument for including the live track at the end. The Clef Hangers' voices sound totally different live, full of color and variety and shape and movement. Sure, they don't have as much perfection as the studio track we heard just before, and we wouldn't want a whole album with this kind of tuning — but the soul is there, and the colors. You can see the sky.

I want more sky! I don't want more homogenous covers of guy-pop like Clapton's Change the World or even soul-styled numbers like Rolling in the Deep. I mean, they're nice and all — everything on this record turned out nice, from the choral The Parting Glass to the country-swing Wagon Wheel — but I want more air. I feel like it's in here. You can hear it seeping out of energetic Some Nights, the persistence of Madness, or the autotuned harmonic glory of the Woods intro. Maybe if I listen to this disc enough times, I'll find more of it.

I've been singing the praises of the UNC Clef Hangers for close to a decade now while simultaneously taking them to task for certain creative choices that have been pretty consistent from release to release. The result has been generally high scores for the finished product with plentiful caveats about how unfulfilled their contemporary a cappella covers have often left me.

In one notable way — if not abandoning, then slowly backing away from slavishly transcriptive, hyper-produced, and thus somewhat mechanical, uninspiring arrangements and performances — the Clefs have taken a step forward with their 35th anniversary release, The Mallard. With the exception of the vp (which is entirely uncredited, and rightfully so, as it's barely identifiable as human on many of the selections), there is a humanity to (most of) the vocals and the performances that has been lacking in prior efforts.

Unfortunately, in stripping away some of the bells and whistles, the Emperor has been left, if not without clothes, then pretty casually and plainly dressed. Arrangements are the biggest culprit, with volume and fullness of chords inadequately substituting for depth, complexity, and texture in the backgrounds. Many a song is little more than variations on block chords and it gets quite mind-numbing after a while. To be fair, the Clefs' sound is lush and in those moments that require soaring, rich group harmonies, they can deliver in spades. But in those moments that might call for more sophisticated rhythms or layering of multiple rhythms, or just plain "space" within an arrangement for the sake of providing variation and breaking up the drone of chordal "noise", there is little in the way of intricacy or invention to be found.

To his credit, the production work of Dave Sperandio goes a long way in dressing up many of these less-interesting arrangements, but even he can't make Thinkin Bout You more than a capable but thoroughly boring attempt to replicate, rather than interpret, the original. And in a few instances, I was left to wonder whether it was the group's choice or Dio's to put the same slick varnish on Wagon Wheel, I Won't Give Up, Woods, and Gravity that homogenize them in a way that robs them of all of the flavor of the original. The plucked banjo/mandolin effect in Wagon Wheel is delightful, but the rawness of the original sound that adds to the emotion and longing in the original solo is obliterated in the slickness of the production here. The imprecision of Bon Iver on Woods coupled with the electronic manipulation is part of what gives the original song its character. Here, it's technically rendered almost flawlessly, yet that in turn makes it a far less engaging song. Either of these would have made far more interesting live "bonus" (uncredited) tracks for me than a repeat of Gravity, where Cole Hammack's solo is once again terrific but the tuning in the group is so shaky that it begs the question of why it deserved an encore.

Though this album was recorded over a period of a few years — so it's slightly unfair to criticize on this front — the Clefs might also have a closer look at repertoire. Forgetting that Paradise, Rolling in the Deep, and Some Nights have all now been done countless times, the flow of this album is hurt by song choices that are mired predominantly in middle tempos. Very little truly rocks out and very little slows down enough to be emotional. The styles may vary a bit but there is a sameness to the "feel" of song after song that becomes monotonous.

By any standards, and by collegiate standards certainly, the Clef Hangers have a long and accomplished history of producing quality a cappella and one slightly-less-good release won't make me give up on them. But there's also no question that the bar has been steadily raised over the last decade as to what's truly excellent work. What was impressive even a handful of years ago is merely typical now. In my mind, the Clefs have some catching up to do.

With an album cover dressed for a black tie affair, and with gold writing proudly proclaiming the Clef Hangers' 35th anniversary, these gents from UNC have set the stage for a celebration. But The Mallard falls short in the emotional delivery of Clefs' albums past. And that's what the Clefs have communicated to us aca nuts lately: that they are brilliant singers who'll sear your heart with their gorgeous, finely tuned, exquisitely nuanced, don't-you-feel-weak-now vocals. And I think we've responded with appropriate enthusiasm for their recording achievements. But this here bird is more ordinary.

There's sort of an "Old Clefs & New Clefs" present on The Mallard. We hear a nod to the Clef Hangers sound of yore with Bedshaped, a soaring, tension-filled ballad with a very challenging score (Sean Currlin) that requires focused musicianship and leaves the listener captivated — praise to Phillip Bouché for so skillfully singing this lead. And then there's the forward-thinking Madness, which hits the sweet spot of creative production (Sperandio); has a fast-moving, ever-unfolding arrangement (Jason Perfetto); committed backs; and a bold lead, again from Phillip Bouché.

Most everything else on The Mallard is presented as aca commonality, especially works like Colder Weather, Some Nights, and Rolling in the Deep, which are pretty straightforward save for a few licks here and there. And there's two Gravity renditions (John Mayer's), the final live version being way too out of tune and way too rough for the rest of this studio album. If we were just tasked with evaluating the soloist for the last Gravity, that's one thing, because he's great; but oh dear, the rest. Sentimentality maybe shouldn't trump sound decision-making when it's for all-time.

If you're an established fan, I'm guessing you'll enjoy the last few releases more than The Mallard. But congratulations all the same to the Clef Hangers for 35 years of staying power and screaming fans at UNC.

The Mallard can be ordered online from the UNC General Alumni Association.