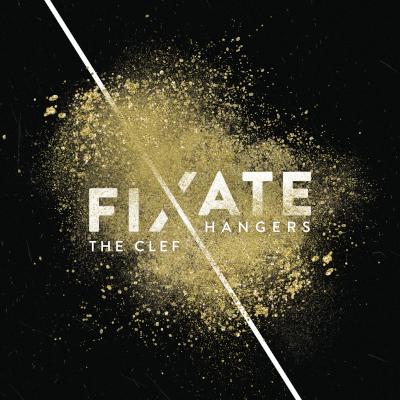 If the UNC Clef Hangers needed a special reason to up their recorded a cappella game, their 40th anniversary celebration certainly seems like an auspicious enough occasion. So it pleases me greatly to discover that they have indeed done just that and, while they perhaps haven't yet climbed back to the heights circa Twist and Time Out almost a decade ago, they may well be on their way.

Stylistically, the repertoire on this album is a bit all over the map as you may notice from the track listing. We get singer-songwriter crooning in the form of John Legend and James Bay. We get electronica and rap and some pretty mainstream pop, as well as a throwback to Stevie Wonder offered here as an effective and building slow jam. Normally, such a diverse repertoire might give me pause, but for the most part, the guys manage to make it work. The ordering of the songs makes for a good flow — so many collegiate groups underestimate the importance of this — such that nothing proves jarring no matter how different it may be from what came before.

Whether it's the occasion of the anniversary or just a re-dedication to this aspect of their performance, the "Blahs" described at length in my review of That Other Shore are nearly banished here. There's a palpable energy and sense of excitement for performing this music that translates to the listener and it's refreshing given the group's history in that area. While the production work by Pablo Vega is (unsurprisingly) excellent, there may even be a few places where the enthusiasm of the background voices is allowed to threaten to overwhelm that of the soloist — WILD is the most noticeable instance, and Levels to a lesser extent — but it's the exception rather than a norm and really a minor complaint.

There are two meaningful issues that show themselves multiple times. Firstly, the employment of homophonic word echoes in the backgrounds. In particular when rendered so formally — almost chorally — as they often are here, it's just plain cheesy and often distracts from and/or interferes with the emotional tone of the song as it's being crafted by the soloist. Examples abound, but the verses of Love Me Now are really the worst offender in this area. It becomes almost Glee-Club-y at moments and surely that is not what the Clefs were going for.

Secondly, most notably on the final three songs (but also earlier in Tennessee Whiskey and in a few other scattered moments), there are marked lapses in attention to the feel of the song as originally performed. Sure, if the group was deviating drastically from the original (as they do effectively in Superstition), this could be chalked up to an artistic choice. But for the most part, these are pretty slavish covers and as such, when the group (and perhaps Vega to some extent as well) ignores key elements that make the original song what it is and fail to translate those into these covers, it lessens the impact of their efforts. Listen to how full and rich Tennessee Whiskey is right from the top and you'll hear what I mean. Ditto for Let It Go — pay attention to how insistent and strident the background voices are, again right from the jump. The notes the Clefs are singing are all correct, and it's a reasonable representation of the song, but someone hasn't paid enough attention to how to preserve and render all of the character and longing and near-desperation established initially by James Bay and his single guitar. Say It has similarly been homogenized/sanitized a bit — it feels like a very milquetoast, straight ahead, smooth, earnest mid- to uptempo dance-y pop tune, which I think is decently far from how one might describe the original.

Mind you, even on the less successful songs, this album is far ahead of That Other Shore in many ways. There is life in it, for one. And there are seemingly some bolder and more varied choices being made, which is also a step in the right direction. The Clefs will only have one 40th anniversary so they may not have the same incentive or impetus the next time they set foot in the studio, but here's hoping they can maintain and build on the resurgence they've started here and can take it even further in the future.

The UNC Clef Hangers' Fixate goes down smooth like Tennessee Whiskey. It is an eminently listenable and cohesive album with a few WILD moments where I Can't Feel My Face. The group spreads the solo love amongst about a dozen group members and I'll just Say It — the album does not suffer from that choice one little bit.

I do not mean to throw Cold Water on the new age of digital recording, where anyone with a computer can attempt to make music; however, it is no Superstition that using professionals will polish an album until it sparkles. The Clef Hangers turn to The Workshop, The Vocal Company, and Dave Sperandio for tracking, mixing, editing, and mastering. The production is clean and relatively unobtrusive, allowing the voices to shine through.

If you are looking for purely unadulterated vocals, however, you'll have to Let It Go. The Clef Hangers do not shy away from studio effects, but use them to enhance. This is done the most in the Fetty Wap cover Trap Queen.

Considering the wide range of Levels in collegiate a cappella, the Clef Hangers are most definitely at the top. Fixate says Love Me Now and it's hard not to with the Clef Hangers Lookin' Like That.

Fixate marks the 13th album that the Clef Hangers have submitted to RARB, and the group's 21st studio album. Thanks so much for this; thank you for letting so many of us see and hear your history in this time capsule fashion so we can learn from you. And thanks for Fixate, a rock 'em sock 'em album celebrating your 40th YEAR that delivers really great a cappella, and will be seen as a pinnacle chapter in your long story as the Clef Hangers.

This release opens with Cold Water, a very contemporary sounding track with a thick syrupy bass and a steady punchy beat. The sudden sonic shift at the bridge is refreshing and actually serves as a true transitional element to the song's end. But this is all just a warm up to the best track on Fixate, a reinterpretation of iconic Superstition. It borders on chilling; heavy on minor chords and distant back-there-in-the-woods background lines that create something ominous. During my first listen, I was nervous the group would snap back into Stevie's funky classic soul 70s bopper, but the Clefs hang on to their own imaginations and it's equal parts fascinating and gorgeous.

The next track that'll really grab your attention is WILD, which features (for me) the absolute sweet spot in production vs the human condition. It's polished and crisp, but just a tiny bit raw, too, especially in the vocal percussion. There is so very much to listen to and admire here. I'm also attracted to the full-throated high harmonics filling out Can't Feel My Face, like the Clefs did a secret handshake and agreed to give 110% focus and precision before hitting the Record button. The full tricks and licks from the lead on Tennessee Whiskey are nearly impossible to believe and certainly impossible to replicate, because this voice is one for the ages. Levels is just trippy happy FUN, and puts the production house on full display, but also requires the Clefs to bring their own party to add the authenticity. Also, as is the group's calling card, there's a Carolina-specific song in here with local shout-outs sprinkled into Trap Queen.

The last three are a slice less intense than the previous works, but in a way, it's nice to have a breather to finish. The lead's unique timbre adds a lot to Love Me Now and the arrangement goes to unexpected places. The falsetto backgrounds of Let It Go demonstrate the nimbleness and keen skill of the Clef Hangers, and Say It feels like a nice bookend to Cold Water with its similar modern stylings.

Not much to do but sit back and enjoy this one. Happy Anniversary, Clef Hangers!