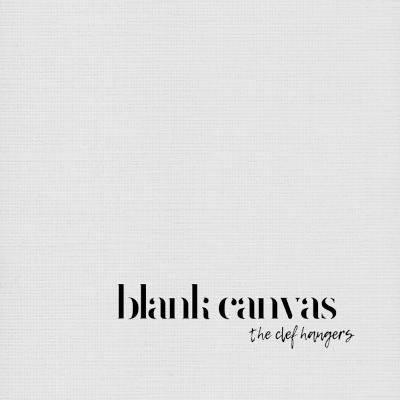 Two years ago, the UNC Clef Hangers showed renewed promise with their 40th anniversary release, Fixate. So my hopes — and expectations — were reasonably high for blank canvas, an album title rife with possibilities and potential if ever there was one.

Somewhat regrettably then, the Clefs have created a musical painting of sorts that is pleasant and color-filled and could likely hang attractively in someone's home, garnering more than its fair share of comments from guests of "oh, that's lovely". But upon more careful scrutiny, the whole is perhaps more agreeable than the sum of its parts. The use of color is not as imaginative as it could be, and shades toward the annoyingly repetitive. The brush strokes are a bit clunky at times. The attempts to draw inspiration from prior masters lack a certain imagination and nuance.

Repertoire choice may have something to do with it, as the Clefs — known in the past for wildly ranging song styles — show a heavy preference for male singer-songwriters (primarily English). blank canvas offers up selections by Ed Sheeran (two songs), Shawn Mendes, Sam Smith, a cover by Calum Scott, and Ben Abraham over a stretch of the final eight songs. That's a lot, and I wish I could say that what the group does with each song is so unique and interesting that the stylistic similarities in the source material don't matter, but that just isn't the case.

Also not helping matters is a tendency noted on Fixate - occasionally glossing over or seemingly ignoring altogether the feel of the original material (on a cover that isn't otherwise trying to veer wildly away from that original). The group chooses to cover the Sheeran-Beyoncé duet version of Perfect, but the production and entrance of the backbeat on the first chorus echoes back to the Sheeran solo version and robs the duet of much of its more plaintive character. The same is true in Songbird, which feels a bit overproduced and gets way too loud, too fast — as if the group, the song's arranger, and/or the album producers are afraid of "less is more". Both could take a lesson from Matt Goldman's arranging (and wonderful solo) on Dancing On My Own, which finds nearly the perfect balance in adapting the delicate, fragile piano of the original for voices. Pray is also a welcome instance where the group embraces simplicity and the result — a nearly song-long crescendo that builds terrifically and powerfully — is wonderful.

Speaking of production, it's mostly solid, as one would expect from veteran Pablo Vega. Oddly, at least one selection — In My Blood - sounds distinctly different from most of the rest of the album and I can't really explain why, but it's a bit jarring. The whole soundscape just feels "drier" (seemingly less full, less reverb, less doubling/chorusing), the blend weaker, and thus the impact of the song is mitigated. In two other instances — breathin and Castle on the Hill — there are choruses that feel extremely disjointed and messy, with a jumble of individual parts doing their own thing rather than melding into a cohesive whole. But that could easily be as much a function of the arrangement as anything that Vega could have helped.

And yet, despite all of the above, the energy/intensity score is a deserved 5, which in part is also why the repeat listenability score is also excellent. As noted at the top, even with its shortcomings, this is absolutely an enjoyable listen. Just maybe not listening THAT closely. And on shuffle with a few other albums mixed in to break things up a bit.

If the Clefs are using watercolors this go-around, blank canvas certainly has golden peaks, but also muted valleys.

Two tracks on this long-awaited album were previously released as singles to exceptional fanfare. And I do mean exceptional: Castle on the Hill was RARB's 2017 Single of the Year because of its "sonic drama", and "speaker shaking" Pray received a 5 when I reviewed it in 2018. So, was this all an exciting precursor to the next-level album we waited for?

For a few tracks, absolutely.

I'm guessing Rhiannon was a bit too long for a single release, but that it takes its time to unfold into the Fleetwood Mac classic is precisely why it's so captivating. The original is already one of the most iconic sultry slow jams we've got, but the Clefs make this spin their own with haunting instrumentals for the first minute, and growing firepower from the choir at peak emotional times. Tying it all together, lead Swain Molster sings with such fragility and yearning that you'll stay firmly under his spell. Arrangements this smoldering don't come along often enough in the collegiate world. The group's work replaying other eras gone by also comes to life on If I Ain't Got You. Here, Alicia Keys's 2003 global hit is given a funky '70s sheen in production and through its soul singer lead, Jabriel Rice. He's taking a risk with his interpretation, and he succeeds in making us love this song all over again.

How about another showstopper? Dancing On My Own is an atmospheric dazzler. Arranger Matt Goldman transforms the elegant simplicity of voice + piano from Calum Scott's performance into a complex composition for his group that shines a spotlight on the poignant lyrics to add depth to his work. And again, its the production from Pablo Vega getting that final feel just right in our headphones and hearts.

This handful of highlighted songs offers such sophistication that it's much harder to sit with the standard pop fare peppering the rest of blank canvas. But wait, isn't Castle on the Hill standard pop fare? It could have been, but the Clefs decided to blow their sound right out of North Carolina. Here's the other big differentiator: Matt Goldman arranges or co-arranged three of these tracks. (The other, Pray, was written by an alum back in 2008 when Goldman was too young to help ... though given his deft musical talents, maybe he was old enough.) Still, I respect that you have to select music that your members connect to, that they really enjoy singing. That said, the source material better be transformed into something special for your particular group before you book the recording studio. Keep editing in rehearsals — new notes, new rhythms, new words, new ideas — until you're bursting with impatience to share your creativity.

For this blank canvas, I'm choosing to marvel at the art of the hits here. The Clef Hangers remain favorites of many, and hearing their best is always a pleasure.

Whether you're a newcomer to the a cappella community or a seasoned veteran, there's a good chance you've heard of the Clef Hangers. Founded in 1977, these men from the University of North Carolina have been an example of perennial excellence with numerous contributions on Best of Collegiate a Cappella (BOCA), Voices Only, and Sing compilations. blank canvas is the next installment from the group. After listening to this album, it's easy to see why the Clefs have so much notoriety. This album is the a cappella equivalent of a grilled cheese sandwich and bowl of tomato soup on a chilly autumn day. It's comforting yet simple, with just enough complexity to leave the listener completely satisfied while wanting just a little bit more.

Let's start right at the top, because the opening impact of the first track sets the mood for the entire album. Finesse (Remix) is a phenomenal opening for blank canvas. Eric Long and Matt Goldman made great decisions in arranging this track to create a great mid-tempo groove. Goldman then solos on this number and gives a swoon-worthy performance. This track is simple in its execution, but the energy turns that simplicity into a strength, letting the members just have an infectious amount of fun.

Rhiannon is a completely different style from the opening track. The arranger (again Goldman) sets the stage as soft and serene. The overall arc of this song is phenomenal, switching from a wistful longing to brazenly begging for a lost love. The chords begin simply, moving slowly while introducing colors and setting the mood before accelerating and barreling forward like a train in the night. It's haunting and absolutely gorgeous. Soloist Swain Molster takes this song and makes it his own. The group puts him in the best situation to succeed throughout the entire track, and I love every second of it.

Finally, after wading through the middle of the album filled with what feels like pretty standard fare for a collegiate group, there's a hidden gem in Dancing On My Own. The "gender-bender" solo has been a long-running trope for many collegiate groups. However, the style has been condemned to be funny at best, and at worst offensive. These types of covers are often kept in the original key, sung by the highest tenor, and usually aided by some raunchy choreography. This track is none of the above, and that's why I love it so much. Matt Goldman arranged this one and solos on it, too. The arrangement is simple in its presentation, giving the feeling of an isolated soloist. You can feel the heartbreak through the speakers. The impactful dissonant chord on the lyrics "the music dies" just drives the point home. It's a gut-wrenching performance, and I will happily wallow in that soloist's melancholy for a repeat listen.

With all that blank canvas shows, it's easy to understand why the Clef Hangers have been so good all these years. There is nothing earth-shattering about the entirety of this album. The songs are familiar, yet add just enough complexity to keep the listener engaged. The soloists are honest and engaging. This album is simplicity executed to perfection, letting these men from UNC shine as brightly as possible.