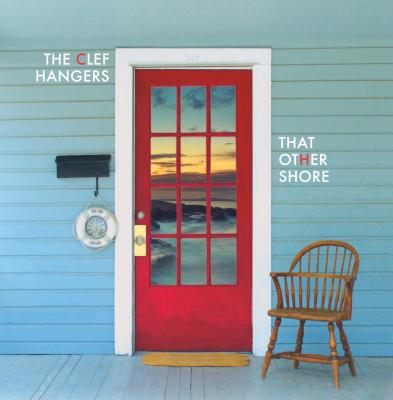 It started with House Rules, continued with The Mallard, and now, with That Other Shore, I'm saddened to report that the Clef Hangers of today are a rather far cry from the Clefs of yesteryear.

Examples of the issues that plague this release could be seen in those earlier efforts, but what was then hoped to be just a passing symptom is something of a full fledged epidemic here.

What's the disease? I'm not entirely sure of the clinical term, but I would best describe it as "The Blahs".

The Blahs present most often in mid-tempo music that just kinda sits there without moving you in any particular direction or towards any particular emotion. It tends to start and finish in roughly the same dynamic and emotional place. Its backgrounds are mostly droning, lush whole note background chords, relying on crisp, sampled vocal percussion to anchor the rhythm. The Blahs offer very little by way of interpretation, opting instead for the most predictable and straightforward approach to the material being covered. The Blahs can be exacerbated by dispassionate singing in the background voices that can rob even the most energetic soloist and drag down the overall feel of the song.

And that, regrettably, describes my feeling about most of the repertoire offered here. There are a few glimmers of light — not surprisingly, on material that lends itself either to a mellower, easygoing interpretation (Thinking Out Loud) or a more choral interpretation (the spiritual I Need Thee Every Hour). The Blahs are perhaps a little less uncomfortable in A Change is Gonna Come because a simple doo-wop approach works nicely. And while the opening is a short song that doesn't really go anywhere, the slow-jam, funk feel at least stands in stark contrast to most of what follows.

The rest, though, is Blah through and through. I hesitate to assign "blame" as it's not especially productive, but so much of this material is arranged by one person (Jeff Popkin) that it's hard not to suggest that the sophistication of his musical pallette may just be limited. These are certainly serviceable arrangements insofar as the chords seem correct and the general feels of the songs are faithful to the originals. But that's precisely it — these versions truly go no further than that. They are not inventive or remarkable in any way. They are strictly by the book. And to be fair, the detached, restrained performances in the background vocals don't do the group any favors either. The soloists offer a bit more oomph but it's tough for them to compete or make a meaningful difference when the bulk of the group is just chugging along on auto-pilot. The whole thing sounds quite good thanks to the recording, mixing, and editing efforts of Pablo Vega, but it's a bit of smoke and mirrors. A great vp sample/loop does not a great arrangement or compelling performance make. Underneath, the quality of the emperor's clothes has diminished significantly.

Perhaps this is just the cyclical nature of collegiate a cappella, which — with some rare exceptions — does often have a sine wave tendency to it, especially with groups that are well-established with a rich legacy of success. The Clef Hangers definitely have that and maybe we're just catching them at a low point. When they're on their game, they can be spectacular, so here's hoping this is just the very beginning of a trip back to the top.

When there's new music from The Clef Hangers, it's time for me to throw confetti. With That Other Shore, we get twelve tracks, and they all sound good! Yes! The production is even, the musicality and stylistic finesse is audible, and most of these songs have arrangements that strive to develop and ripen. The Clef Hangers still have soaring tenors that tug on your heart, thick basses that anchor their ship down, and meaty middles that fill out these songs beautifully. The ensemble sound here remains top-notch, on-par with another nautical-lovin' group up in Hyannis.

But confetti-throwing fans are hungry for more from a group who has given us awesome celebrations in the past. While above-average consistency is certainly an accomplishment, That Other Shore is an absolute jukebox of an album, sounding more like twelve standalone singles than a cohesive group vision with an arc. The Clef Hangers dip their toes into as many genres as they can squeeze into one release, even choral Christian music. And while this anything goes approach is totally normal for collegiate groups, and probably a lot of fun for the members, in a crowded field of talented all-male groups, none of these tracks rises to truly exceptional levels despite the strong musicians behind the notes. None of these tracks sounds unique enough to say, "You've gotta hear the Clef Hangers sing this..." And with full-release albums becoming more rare in favor of more manageable EPs, I'm yearning for at least one total knockout here in all of this music. The Clef Hangers come close with groovin', head-boppin' FourFiveSeconds, and perhaps closer still with the multi-lead spiritual-sounding California with its high energy and precision vocals. That Other Shore will please most listeners, and maybe that's satisfying enough for this group, but it'll fall short of leaving an enduring impression like releases from others eras of The Clef Hangers. The crazy thing is, the voices are present to do just this. So that's where my troubles brew, despite appreciating this beautiful music and these strong musicians. It's just a case of missed potential, and this long-time Clef Hangers fan wants to add balloons with the confetti.

If you're a fellow fan, you already own this release and you're happy to have it. I am too, though I'm waiting for another ultra grade album from these UNC icons.

The University of North Carolina's Clef Hangers took a couple of years to release another album after The Mallard in 2013. That Other Shore offers a little bit of variation — starting from Jungle, ending in Amazing Grace. I've always thought an album should have a central theme; but then, most albums are just mere compilations. The overall production is as good as it gets — the same goes for the arrangements.

There are a couple of interesting Christian contemporary themed songs here — Amazing Grace and I Need Thee Every Hour — that are both choral in style. They almost sound like The A Cappella Company collegiate version. On a serious note, I feel a deep connection to the soloists to these songs more than the rest of the tracks in the album. There is no attempt to show off vocal acrobatics, but just enough ear pleasure by plain singing.

There are a few more notable soloists I enjoy listening to on this album. Charlie Harris has the pipes to soothe, and if you want to find out for yourself, just go ahead and play I See You, I Need Thee Every Hour, and Happy. The group's musicality must have been challenged in the complex chord progressions in I See You, where it seems to change keys every couple of measures. It's one of my favorite arrangements in this album, props to Sean Currlin. Next up, Thinking Out Loud could not have sounded any better a cappella as performed by Channing Mitzell — it's a simplistic approach in singing an Ed Sheeran hit. Miles Herr's performance of Faithfully starts really good but it's a bit disappointing in the coda part where "I'm forever yours, ever yours" is sung in falsetto instead of a mixed register. Lastly, Chandelier has got to be the most covered song since Sia released it, but tag team soloists Carter Gregory and Channing Mitzell give it such a feel-good effect even though there's repetition that starts to get painful after a few rewinds.

The variations presented in this album are a good attempt to show listeners that The Clef Hangers enjoy delivering a cappella music in any theme or style. But questions arise when the fans start to look for the group's real identity and brand of artistry to keep them wanting more. Is it the solos? Is it the fun arrangements? Or are they just serving whatever a cappella music they have on their plate?

That Other Shore is a well-produced album by Pablo Vega and Jeff Popkin, with mastering by Dave Sperandio. I feel the urge to skip some tracks, but there are some bits to keep in my long list of favorites. The Clef Hangers should keep the music coming. Hopefully, a step up from this album.