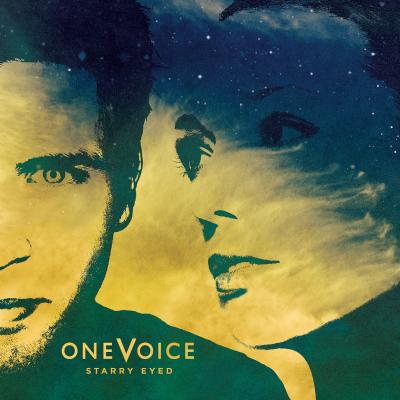 OneVoice continues its dominating run through the national high school a cappella scene with Starry Eyed, another compelling, almost unbelievably good release from the students at Briarcrest Christian School.

The group sticks with its successful production formula from Drive All Night, re-harnessing the mighty powers of professional arrangers Ben Bram and Robert Dietz; with mixing and mastering still deftly handled by Dave Sperandio (for diovoce); and the skillful editors at Plaid Productions (Green and Koutzoukis) shining and waxing before pick-up. And oh, here's a big one: it's all still brought together by the group's director, J.D. Frizzell, who is now a certifiable legend in high school a cappella. Starry Eyed is likely the best example we have of not changing what ain't broken. And so the legacy continues.

Drive All Night is my go-to release to shock and delight musical friends who aren't into the high school a cappella scene ... yet. Time will tell if Starry Eyed will complement my introduction class. But here's a few darn good reasons why it might, starting with 11th grader Hannah Gray and her incredible performance on the lead microphone for Who Will Comfort Me. Miss Gray sounds like her "day job" is leading an internationally touring premiere gospel choir, but no, she's simply the best darned 11th grade singer you're likely to encounter, with an alto-tenor voice that can summon angels to earth. On the group front, these kids delivering Life Support equates to 4:39 of goosebumps. The musicality —  the turning, blending, phrasing, dynamics, build, diction, emotions, good breathing, good ears — it's just everything, all here for us to enjoy. There is not one weak voice in OneVoice; this is a superb ensemble indeed. Equally impressive is the arrangement by Dietz underneath Life Support, which, in a professionally produced album, still pops up as beautiful, stunning, strong a cappella, with individual line nuances pulled out and tucked back in, creating a vocal tapestry with something new to find each listen. Life Support is as perfect as it gets. To close the album, Sky Full of Stars bookends OneVoice's celestial theme, cleverly and smoothly integrating parts of each prior song into its ending, echoing the last number on Drive All Night. A real album, all tied together and meant to be enjoyed as a whole instead of parts: it's rare, and wonderful.

Do I think Starry Eyed can replace Drive All Night as my primer? I don't. Maybe it's because we know what to expect now. But mostly, the transitional details from song to song on Drive All Night remain unmatched, and that particular make-up of OneVoice was just arresting for the tracks chosen.

All the same, please add Starry Eyed to your library with confidence — OneVoice is the group to follow.

There are competing theories among music fans about the ideal shape of an artist's career arc. Some believe that it is an artist's job to replicate that which he has done successfully so that each album is essentially "more of the same," or "more of what I like." Others believe it is an artist's job to explore, grow, find new ways to express himself, even if this means striking out in a new direction. OneVoice, the mixed high school group from Memphis, Tennessee, has leaned towards the latter approach with Starry Eyed, an album which is commendably ambitious even if it doesn't quite reach the heights of its last album. Drive All Night was a RARB Pick of the Year, due in large part to its intelligent vision, the group's mature singing, and the thoughtful preparation and production by director and producer J.D. Frizzell. Frizzell was clearly unwilling to rest on the success of that formula with Starry Eyed, and his ambitious approach gives us less mashups but more aural diversity, less successful phrasing but more promising arrangements. It's a bit of an anomaly, really, but one which is a rewarding and intriguing listening experience.

It all starts with arrangements, and Frizzell has brought back professional arrangers Robert Dietz and Ben Bram for more detailed, complicated arrangements. The problem and blessing is that both have upped the ante, crafting charts which are very interesting but also extremely difficult. Some, particularly Bram's All Because of You and I Feel Better, sound better suited for a smaller, nimbler, professional ensemble (like Pentatonix) in terms of structure and texture. This is hardly surprising since Bram arranged for The Sing Off and continues to work with PTX. Unfortunately, the success of such arrangements with a group of eleven, and particularly a group of eleven less experienced singers, is hardly guaranteed. As good as OneVoice is at bringing this approach to life on All Because of You, the group struggles a little on I Feel Better. On the other hand, both songs bring a playful joy to the table which was notably absent from Drive All Night, and it was a smart choice for OneVoice to include the tracks despite the mixed success.

Dietz's thickly atmospheric arrangements generally work better for the group, perhaps in part due to the group's experience with his approach. Starry Eyed is swirling with driving momentum. Life Support is delicate and vulnerable, expertly inviting the listener into the middle of an exposed moment between soloists Anna Jones and Austin McElveen (more on them in a moment). OneVoice finishes the album triumphantly with Coldplay's Sky Full of Stars, coming full circle as Dietz's arrangement pulls in a minute-long mashup of Starry Eyed, Things We Lost in the Fire, and Life Support. The chart on Rather Be is surprisingly jazzy, but the group fails to quite nail the syncopations, resulting in some awkward moments.

As with the last album, the female soloists in OneVoice show off mature, rich voices in considered performances. After drawing praise from all three reviewers in the Drive All Night review, Hannah Gray returns to slink her way through a soulful performance on Who Will Comfort Me, which carries the song to a whole different level. Chandler Booth shines on the title track, and Anna Jones engages beautifully with Austin McElveen on Life Support.

As with Drive All Night, Dave Sperandio's mixes take advantage of the space and atmosphere provided by Dietz's arrangements and filled by the group's talented singers, giving only some polish and reverb to create a welcome sheen on the music. Other effects, when used, are tastefully deployed and always in moderation. When a group can sing like this, bells and whistles are rarely necessary and can even be counterproductive, and Sperandio knows it and stays out of the way.

This is a whole lot of praise, but Starry Eyed is not a perfect album. The group fails to recapture the successful phrasing of Drive All Night and have lost a little bit of the mature sound which was so noteworthy there. This is particularly true in the backing voices, which seem less energetic and less invested this time around. There are moments of near lethargy in Things We Lost in the Fire and more disappointingly in the jaunty Motown-esque I Feel Better.

Nitpicking aside, OneVoice is a talented group whose work again proves to be among the best amateur recordings I've reviewed in my time at RARB. I don't fault the group in the least for trying to push the envelope with some different types of arrangements, and I don't fault them for just-missing in the performances on a few. Starry Eyed is a great album, one which will impress and engage listeners for some time. Or at least until Frizzell and OneVoice begin their next search for a new challenge or approach. One measure of an artist's success is whether it has earned the audience's faith and trust. At this point, OneVoice has earned mine, and I'll be along for the next ride.

Music director J.D. Frizzell deserves immense credit for putting his students in a position not only to succeed, but to excel. High school a cappella is only inherently different in one key way: age. From a purely physical standpoint, voices are not quite as developed as those you hear in collegiate and post-collegiate groups. There are subtle ways to combat this in order to have a successful product, such as choosing repertoire with modest range that can be performed with great style, which is artfully employed here. In only a few places was I reminded that I was listening to a high school group: the solos for Who Will Comfort Me and I Feel Better are fine, though they are somewhat washed out by the fully-engaged background singers and not quite at the level of the rest of the album.

On the other hand, there is a multitude of positive things to say about the individual tracks. Starry Eyed sets a sophisticated tone with its sophisticated studio effects, confident and stylized solo, and driving background vocals. All Because of You grooves more and is driven by the smooth lead vocals of Austin McElveen all the way to the fantastic handling of the chord progression in the last refrain, which is worth the price of admission alone. One of the most covered a cappella tunes of late, Rather Be, is tackled with great energy and a harmonic section at the end that sets it apart. Things We Lost in the Fire serves the entire album as a dramatic unifier to the Starry Eyed theme and employs clean, powerful percussion. Sky Full of Stars utilizes glottal stops in an aesthetically pleasing way on top of some well-crafted vocal percussion before becoming a very tasteful mashup of the entire album.

Life Support deserves a paragraph for itself, even after earning a spot on the Voices Only 2015 compilation for good reasons. OneVoice's rendition draws the listener into its tender, heartfelt message at the very top. The Sam Smith original is turned on its head into even more of a ballad, removing most of the pop percussion in favor of hits when necessary and replacing Smith's falsetto with absolutely chilling major-major 7th chords teeming with raw emotion. Between its vision and execution, this track is nothing short of exceptional.

One of the best aspects of this EP is how seamlessly each track rolls into the next. The listener is taken on a journey and reminded in a couple of key spots that the Starry Eyed tune, the song that opens the EP, is a unifying factor. The entire EP ends on a profoundly haunting note with a powerful, bright major chord on top and the minor tonic Starry Eyed figure on the bottom. Major credit belongs to the professional arrangers who contributed to this EP, Ben Bram and fellow RARB reviewer Robert Dietz, for their ingenuity in reharmonization, parts that sound incredibly fun to sing, and gorgeous voicing, both vertical and hortizontal.

Starry Eyed should serve as an example of how successful an album can be with careful construction from conceptualization and arranging through preparation and recording, regardless of age and experience level. You could not pick up a copy soon enough.

Starry Eyed is available for download on iTunes and Loudr. For physical copies, visit briarcrestonevoice.com.