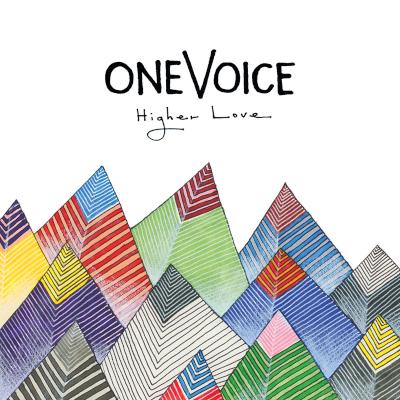 If we're living in the golden age of a cappella, OneVoice will be studied years from now as a prime example of excellence in our genre. Higher Love is another beautiful flow-through album with several seamless transitions and the utmost care in programming, arranging, and producing. When OneVoice records, you can't buy a la carte singles: purchase and enjoy this album as one long musical idea.

Many familiar voices have returned to give us more to love and remember on Higher Love. This is your final chance to hear soloist Hannah Gray in OneVoice (recorded here as a senior) before she surely elevates to a professional superstar. Notes and rhythms are merely suggestions, only starting points for this girl who slays each time she's at the microphone. I've never been more confident that Hannah Gray will be a household name one day. We also get a full buffet of songs from arranger Robert Dietz, who turns in his best work yet with Make It Holy. If you can get through the swirling, spinning display of emotions and clever builds and glorious intensity without goosebumps, your volume is probably too low, because this is as good as it gets. Further applause to Mr. Dietz for the arresting bleed-in transition from Half the Man to Real Love, also fronted by a young lady who was born dazzle, Chandler Booth. The perfectly paired and wonderfully moody duet partners Austin McElveen and Sydney Sparks on Falling Short is another high note here. And truly, a whole NFL stadium could dance to this crazy funk-in-da-house version of Higher Love with its multiple leads and dizzying array of creative risks, though I wish this big-number closer didn't fade out; OneVoice has taught us that when you create power, you release it, not diminish it. And OneVoice is all power.

J.D. Frizzell has built more than a remarkable program, he's building an empire. If you're not on the OneVoice aca wagon yet, you're not too late for an awesome ride.

Making music means different things to different people. It can be a hobby, an emotional outlet, a social experience. For some, however, it is a chance to create something special. For those people, making music is a craft. There are few scholastic groups whose work suggests the concept of craftsmanship better or more consistently than Briarcrest Christian High School's OneVoice. With Higher Love, the group's attention to detail, and the skill and care which went into all facets of production, suggests an emphasis on such artistry.

As with prior albums, the group relies on trusty professionals Rob Dietz for arrangements and Dave Sperandio for tracking and mixing. As in the past, this gives the group a nuanced, textured roadmap and thoughtful, engaging production. All of this means nothing without the single most important ingredient — the performances. Luckily, OneVoice brings its A-game in this department.

Hannah Gray completes the hat trick of earning praise on her third consecutive OneVoice album, this time for her soulful turn on Half the Man, and Chandler Booth makes it two in a row with a dynamic performance on Real Love. Katherine Ann Mohler joins their ranks with her effortless solo on Make It Holy.

It is the backing voices, however, which dig deep into Dietz's charts and sing with passion and devotion, allowing Sperandio to weave a rich, warm atmosphere throughout. The group sings with such intelligence and comprehension of the underlying material that it is able to execute small, exposed moments (Make It Holy, Falling Short) and big, enveloping moments (Real Love, Should've Been Us) with equal skill.

On Drive All Night, OneVoice experimented with mashups and creative transitions, offered in furtherance of a narrative. Starry Eyed took a small step back, substituting extremely nimble and complex arrangements for a bigger picture. Higher Love finds a middle ground, with some storytelling and difficult but achievable musical statements. OneVoice has shown yet again that musical director J.D. Frizzell and his professional support team understand how to challenge the group's singers to elevate their musicality to peak levels. That is true craft, and it is worthy of both praise and your time.

With more accolades in the past year than this reviewer can fit into this piece, including multiple a cappella compilation spots, winning Macy's A Cappella competition, hosting the National A Cappella Convention, and appearances at the American Choral Directors' Association conference and America's Got Talent, Briarcrest OneVoice continues to be the gold standard in high school a cappella, and arguably, the a cappella community at large. After being absolutely floored by the group's last album, Starry Eyed, the only drawback I could envision is that the group has set the bar so high that it is impossible to continue universal growth. If Starry Eyed was a "6", Higher Love is a "5": still truly excellent on its own merits, but subjectively, not quite as groundbreaking as the group's previous work.

Every track has something significant, regardless of my subjective ratings. Perfect World sets the tone with soulful solo vocals and a precisely-executed arrangement with intoxicating background syllables. Half the Man displays such strong vocals, both solo and background, that it's easy to forget that there is no vocal percussion present for the entire first two minutes. Real Love features some power chords and quality vowel modification in the background over driving vocals with occasional syncopated entrances to keep listeners on their toes. Even Falling Short, which I only scored a "3" for its lack of solo interest and comparatively feeling like filler material, features some of the most compelling background vocals on the album. Director J.D. Frizzell and his students should be praised for not leaving one track uninteresting; the group stays engaged, and delivers high-powered energy throughout the album.

I certainly made it clear that I found Life Support to be a life-changing track on Starry Eyed. I don't believe there is quite such a track on Higher Love. But the complete package of emotional vulnerability, virile shifts with the listener taken on a clear journey, plus unique innovation, makes the title track incredibly close. An inventive deconstruction of the iconic '80s tune, Higher Love covers many bases: varying textures (both solo and background), vastly different rhythmic feels between verses, a powerhouse solo and harmony vocals, and a universally positive message. Also notable is the strong, effective transitional material between tracks that create greater continuity within the album, such as the end of Half the Man into Real Love, and Falling Short into Our Own House.

My only disappointment with Higher Love is subjective: there are moments in which I hear the soloists and am left to wonder what the tracks would sound like with more mature voices. The soloists make incredible use of the voices they have, and their ability to push the bounds of their potential at such a young age is commendable, not to mention impressive. But in some moments of songs such as Half the Man, Should've Been Us, and Our Own House, I am reminded that I am listening to high school students, and that is seldom something I consider when listening to OneVoice. While I appreciate OneVoice bridging the gap between high school and professional pop singers with such passion evident in every note, and in no way would I venture to suggest that the group "dumb down" its song choices, perhaps choosing songs in slightly more conservative keys for young voices could alleviate this and make for more unanimously successful repertoire.

It is this reviewer's hope that OneVoice continues to become a household name as one of the pioneer groups of a cappella education. Suffice it to say, Higher Love could not be purchased soon enough.