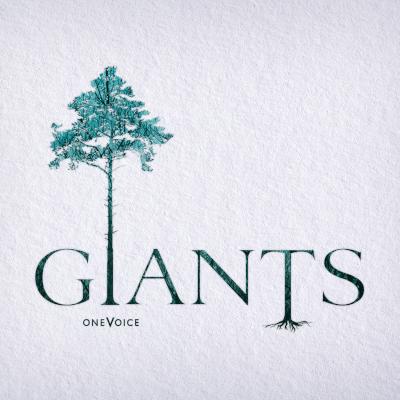 Command, plus precision, plus creativity, equals OneVoice. But we already knew about this group's mathematics. Giants gives us one more integer to add in: legacy. In my opinion, in the non-professional realm, OneVoice is the most impactful a cappella group recording today.

The first lyrical line of this album says it all: "We are giants, and we will not be moved." From the giant original artists this group covers on this release, to earning a place where the group's tree branches scrape the sky, OneVoice continues to grow bigger and more awe-inspiring each year. The track Giants is an upbeat power anthem, and really the perfect anthem for the group's story.

Where the Streets Have No Name is also delivered as an upbeat power anthem, though given a bit more boom and bravado than the original (which has plenty). Though I love the confident 1-2 punch these two tracks deliver to set the stage for Giants, I do think the volume hits and stays at a 12, whereas a solid 10 (with dips lower to invite us back to active listening) is probably sufficient. Still, no one can complain about a lack of confident energy here, a hurdle for many teen artists.

Ready or not, you'll have to confront all of your tucked-away emotions once you play I Am, and you simply must hear I Am. What an incredible arrangement that orchestrates so much around two tiny words — listening to the backgrounds is equally compelling as listening to the lead, especially the movement during transitions. It's a soundtrack for one's life. And it's completely perfect.

For the mid-album number, we're given a high octane rendition of Stevie's Higher Ground. Though certainly fun, OneVoice's version is more of a dance exposition to bop along to than a true soul tune to connect with. Also, programming matters less, but still matters, in the digital age. I feel like I heard ten years of therapy play-out in a few minutes with I Am, and I'm just not ready to shake it out yet.

I Will Wait. My heart hurts when I listen to the intro, a mini original composition that sets up something quite unexpected from this radio hit. The leads get pretty close to the same volume level as the backs, though, a small issue that crops up a lot on Giants (this is a moderate issue on What About Us). It's a very loud release. Sometimes it's hard to pull out moving phrases in the backs when everyone is pressed up against the speakers, and I want to hear every note OneVoice delivers.

What teen can cover Whitney Houston's range and power like Mady Thornburg? She may be the only one, a giant herself on I Have Nothing, with tremendous control and conviction in her belting that creeps ever-higher. The words I said out of disbelief and admiration for Thornburg's skill cannot be repeated in the K-12 education setting.

What About Us is also carefree fun, another sort-of dance exposition, but this time at close to a frenetic tempo. This, however, takes nothing away from the amazing pipes Avery Veteto has to turn on to give Pink's pop jam such vitality and sizzle.

Lastly, the iconic empowerment song You Gotta Be. I am completely enraptured by Lily Williamson telling us what we need to do to be amazing. However, a curious arrangement choice — the accelerated about-face toward the end of this piece to add rhythmic interest — feels rather stapled on during a song that's been resonating so organically for decades. I don't think it needs the alteration. I do think the song itself is just right to close Giants.

I bought Giants a couple of times to support the group. I don't think I've ever done that before, but this album promotes healing and strength, and just feels worthy. (You should definitely purchase at least one copy.) This is exceptional a cappella delivered by passionate young voices — everything we need right now.

Some things aren't what they used to be. Truth. Politics. Interpersonal relationships. Waistlines. Hairlines. Thank goodness for Briarcrest OneVoice, who prove that some things are exactly what they used to be. Another year passes, and once again the young men and women of OneVoice are back with a meticulously crafted album featuring vibrant singing, coated with shiny but honest production, over a bed of complex and sturdy arrangements.

Giants is not my favorite OneVoice album, but it is yet another excellent one. As always, the group has treated its album — an increasingly rare and possibly soon-to-be-extinct concept — as an opportunity to explore a narrative vision. Here, the theme appears to be pairing modern pop songs or artists with their arguable musical forefathers — or at least their influencers. The approach is innovative, if not always convincing, but it really is the thought that counts here. OneVoice rewards the careful listener, and I can't help but appreciate music director J.D. Frizzell and his creative team (arranger Rob Dietz, engineer Dave Sperandio, et. al.), as well as these young singers, for making listening essential in a time of incessant static and noise.

Highlights include the ethereal atmospherics in Mumford and Sons' I Will Wait, the pulsing grooves in U2's Where the Streets Have No Name, and the nuanced baubles lurking just below the surface in Pink's What About Us. As always, the transitions are seamless and the singing is effervescent. The singers are once again prepared, inspired, and working hard to earn the listener's respect. And they have it from this listener.

The songs on Giants may not be appealing to everyone, but the collective effort, attention to detail, and narrative thread make it yet another top entry into the a cappella recorded catalog. Civility, empathy, and charity may be rapidly disappearing societal norms, but for the 30-minute run time of Giants, you can find hope and inspiration in these young voices.

With the continued growth in popularity of a cappella groups from the high school to professional level, listening to a cappella has become somewhat like watching baseball: amidst a long season, one of the joys comes from the possibility of coming across something you've never seen (or heard) before. But it's not just that one sizzling play, or that one clutch home run: it's the play, the home run, and a historic no-hitter from a team adding rookies each year in a game that you'll remember forever. That's what makes Briarcrest OneVoice so special: year in and year out, its albums contain multiple songs, often recognizable, that can be freely shared not only as exceptional but as unique, never-before-heard renditions. Dr. J.D. Frizzell and his talented group of young professionals (who happen to also be high school students) continue in their dynastic run of brilliant recorded a cappella with Giants.

The album leads off with its title track, and whether intentionally done or not, it carries a welcome strain of empowerment. OneVoice speaks with strength and resolve, and in my first few times through this album, I was reminded of current events this year, the trials that have faced the students of Stoneman Douglas in Parkland, FL, and the steadfast manner in which they stood up for themselves. As a disclaimer, in no way is this connection explicitly mentioned in the liner notes, but it is touching to hear such optimistic lyrics sung with power, and it speaks to OneVoice's credit that such a meaningful interpretation can be made.

One of the strongest facets of OneVoice's game is the manner in which solos are sung. For these soloists, notes and rhythms are merely the vessels by which phrases can be sung, and the absence of a strict adherence to the precise rhythm at all times allows the lyrics to truly come off the page and permit storytelling, even in songs without extreme pitch ranges. For example, the solo in Where the Streets Have No Name doesn't feature a wide range of high or low notes, but the earnest way in which Benjamin Cheng sings them keeps the listener thoroughly engaged. The self-discoveries and search for identity through self-affirmation come through beautifully in Sarah Mikkola's stellar performance of I Am. The control exhibited by soloist Avery Veteto in her use of embellishments, slight back-phrasing, and matching the song's feel make What About Us particularly compelling. The trio of Mikkola, Veteto, and Hayden Gray lend their unique talents to create a memorable build in I Will Wait. The high standard set in these tracks makes the strict beat-adherence of the I Have Nothing solo feel a bit rigid in comparison, though Jon Smith's beautiful arrangement more than compensates for it.

Arrangements are the MVP of this album and the transformation that some of these songs have undergone should make anyone's highlight reel. I have no problem saying, "You have NEVER heard Higher Ground like this" after hearing OneVoice's rendition of the funk standard as a straight-8th piece with a driving percussive line, a smooth consistent background rhythm, and a soulful solo delivery by Josiah Parker that matches the new feel. The same can be said of J.D. Frizzell's one-of-a-kind arrangement of the oft-covered I Will Wait with its subtle yet impactful chord substitutions, and Robert Dietz's What About Us with its feel and tempo changes at the forefront.

I Have Nothing but the highest praise for the All-Star lineup of contributors to this album: J.D. Frizzell, Dave Sperandio, Alex Green, Alex Kouzoukis, Rob Dietz, and Ed Boyer. From conception to execution, the seamless transitions, recurring themes, and consciously-chosen punctuation between tracks are extremely effective. The only exception is a distracting bit of mic peaking that occurs toward the end of I Am, which is the only substantial error in an otherwise stellar product.

It has been a pleasure to bear witness to the rise of this incredible culture being built and cultivated in Memphis. OneVoice continues to serve as an example of greatness in the a cappella community. Whether you walk or run, puns intended, be sure to check out Giants as soon as possible.