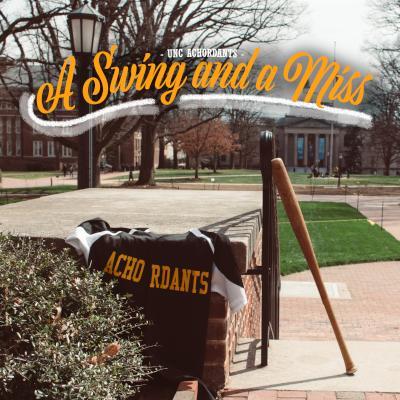 I want to stay until the end of the 9th, but A Swing and a Miss is a little too rec team to hold my interest.

The contemporary a cappella pieces (that is, arranged and produced in a contemporary style) Would You Mind and Sunday Candy are certainly nice selections. The opener has a great isolated bass who is doing his job and then some to keep the group poppin'. On the flashier Sunday Candy, one of the leads has such charisma that even his diction is charming.

The Achordants keep their signature playful, lighthearted spirit on A Swing and a Miss, an approach heard across all of the group's releases submitted to RARB. There's no point in committing time to your "sport" if you're not having fun, but a lot of these songs can't stand amongst other covers of the same, and therein is the problem for repeat listens of this Achordants album. In The Middle, the harsh instrumentation imitation slaps the joy of the bouncy beat right out of the track. A peppy "ba-ba-baaaa!" once for a ta-da style impact is fine, but hearing the line continuously is a missed opportunity to give the song a rhythmic reboot. The guys bring their bag of tricks to Castaway, an island-vibe song that sways between silly and gimmicky. (It's hard to be funny in a recorded medium without being corny; it's a struggle for a lot of groups.) Speaking of humor, it falls really flat on Banter, a whole track that delivers exactly what it claims to do. It reminds me of a high school locker room, except those jokes were free and these cost money. Another attempt at humor closes this album, the spoken-word Oak Tree Dr.; my college group had to fundraise for a year to drop an album, so the choice for two throwaway tracks is curious. If the comedy doesn't deter you, the polarizing track Chunky might. Singing along to Baby Got Back is one of my favorite guilty pleasures, but a mashup of all booty-centric songs is at best tacky here under the Chunky moniker, and at worst degrading (did they have to call it "Chunky"?). This all depends on the listener's mood, but the intended silly-joy isn't coming through my speakers.

I'll leave you to consider Work Song, a faithful rendition of Hozier's spin that comes with Hozier's raw serious intensity. Though the Achordants want to deliver antics, though I understand it's part of their brand, their emo side is strong and compelling and makes one sit up to take notice. Work Song is really authentic on this release. The group, in whatever era, will always do as it wishes, but I'd certainly welcome more sophistication on future projects; primarily, more challenging arrangments and less studio filler to give the comedy forays balanced weights.

The reasons to listen to music are as varied as there are ears to do the listening. Some want art or poetic lyrics. Some want to experience something novel. Some want ambiance or a deep emotional connection. But for those who want to just have a good time with some chill a cappella peeps, A Swing and a Miss by The Achordants from the University of North Carolina would be right up their alley. These guys don't take themselves too seriously as testified by their bonus tracks, one of which encourages you to chop down a mountain.

The album starts with a typically radio-friendly "get your energy up" type of song with Would You Mind. But Castaway is really where the flavor of the album is revealed. This island-esque track, complete with ululating cries, lets you know that you're in for a joyride. The Middle loses some of the edge of the original but keeps the enthusiasm. Chunky, while not as seamless as it could be with its barrage of rump-related references, still keeps things light.

Arranging is a double-edged sword in this album. There is a simplicity that works incredibly well for tracks such as Castaway or Work Song, and, to an extent, Pusher Love Girl. But it bites them back on Chunky and If I Ever Fall In Love, as the added attempts at complexity tend to distract rather than enhance. I do particularly like the transition into the outro for If I Ever Fall In Love. It's an approach that is both simple and unique.

The production value is very high, and the relaxed air of the group jives perfectly with the bright soundscape. A Swing and a Miss may in fact swing, but it's by no means a miss!

The Achordants have always been a curious case to me. If you ask anyone to name a men's a cappella group from the University of North Carolina, the Clef Hangers are most likely the first group to be named. Despite this fact, the Achordants have a small niche in a cappella history as an ICCA finalist back in 2005. This is an almost forgotten piece of history. This new recorded snapshot allows another chance to answer the question, "Who are the Achordants?"

Almost instantly, this album shows that this group focused on fun. The predominant style seems to be grooving. Chunky stands out to me. The presentation is ever-changing in a multitude of ways, whether it's adding little harmonies to the solo, extra background parts to add new rhythms, or entirely different songs such as Jason Derulo and Snoop Dogg's Wiggle and Sir Mix-A-Lot's Baby Got Back. This song based on celebrating women with, ahem, large posteriors may not exactly be the most family-friendly number, but, by golly, is it fun. I'm not fully thrilled at the drastic stylistic changes to make the medley effect work, but I'll let it slide. This track is fun, and the energy bleeds through the speakers.

Of course, when it comes to groups putting crowd excitement at the forefront, sacrifices may happen. Unfortunately, 715-CRΣΣKS might be the largest sacrifice. This cluster-filled quasi-choral composition from Bon Iver leaves very little room for error. Unfortunately, when operating in such a tight window, this track is a misstep for the Achordants. Don't get me wrong, Karthik Sundaram did a fantastic job arranging this behemoth and getting the right chords on paper. However, to get something this choral to sound good, everything has to be perfect. This track sounds good, but it is also filled with little mistakes, whether it's the opening lyrics coming across as "Down along the cree", or the rather frequently occurring failure to align the closing consonants resulting in a handful of cut-offs instead of one. There are also a handful of questionable notes in the baritone part. I don't know if they're very distinctly pitch-corrected, but it sounds to me like the baritones are almost surprised by their notes as opposed to purposefully hitting them. This song is choral by nature, and must be treated as such. It's a great song selection, it just doesn't strike me as executed as strongly as possible.

Finally, this album really dumps off at the end. It almost feels like the group decided to have ten songs on the album, but only had nine in its repertoire. Thus, Banter was born. This track sounds like all the guys sitting around a microphone spouting off every single inside joke they could think of in one minute. The unfortunate side of this decision is that virtually nobody outside the group understands the references, leaving us scratching our heads and wondering why on earth such a thing would be placed on a recording for anyone other than group members to listen to. Even worse, Oak Tree Dr. does this again, now adding what I'm assuming are jokes but really just sound like nonsense. These two tracks not only tarnish what would be a pretty solid album closer in Sunday Candy, but they tarnish the overall feel of this album. Gentlemen, I understand the appeal. My collegiate group had a similar track of inside jokes thrown together in the leftover studio time we had. However, we listened to our grotesque conglomeration of thoughts and collectively agreed it was a terrible decision to add it, and purposefully only kept this recording within the group. I really wish you had done the same.

However, the last tracks do provide a little bit of insight to the Achordants. While the singers have a lot of fun, there are just little things that are truly A Swing and a Miss. For all the fun this group provides, they need to be a choir first. This means that the songs need to have the aligned choral sounds and techniques, confidence, and energy. This group has the energy and the desire to be fun — however, with a little bit more effort and thought, the Achordants could make a final product that would surely excite and impress all audiences at all times.

A Swing and a Miss streams on Spotify.