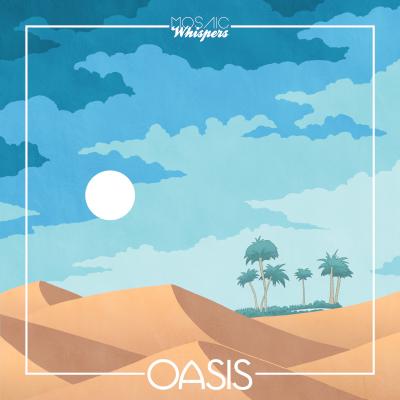 In the liner notes for their 11th studio album, Oasis, the Mosaic Whispers describe this release as a multigenerational project with a focus on family, and express the hope that the listener can "sense the traditions of family, love, and musical dedication that [they] hold so dearly." I'll admit that the material covered here — spanning from the kitschy Toxic and Yeah! to the perhaps lesser known Purple and Out of My Head — doesn't necessarily convey that subtext to me in any meaningful way, but the warm, lush, enveloping, bordering on choral group sound that is favored throughout this release does have a certain comforting, familial feel that is relaxing and enjoyable.

As interesting, compelling, and sophisticated music-making, however, that same tendency proves to be something of a liability for the Whispers this time out. Thankfully, the rigidity that permeated the group's last release, Wavelength, is mostly absent here (Toxic being the primary exception), but it's replaced by a tendency toward arrangements featuring "big block chord" background vocals that at times undermine the feel and groove of the song, at other times compete too much with the solo, and still other times feels like just lazy arranging. The aforementioned Purple and Out of My Head are the main examples. These are songs that were unfamiliar to me so I came to both the original and the Whispers' cover with fresh ears and no expectations. What is disappointing, then, is to see two songs that have very distinct timbres to their soloists' voices and the instrumentation processed through an arranging and engineering approach that doesn't seem to carefully take those details into account. The Whispers' Purple starts so full and lush that it has nowhere to build to by the end of the song (in stark contrast to the original). The raw, echo-y, acoustic feel of the opening of the original Out of My Head is nowhere in evidence here. Instead we get lots of sustained, ringing chords against which Eden Diamond offers a solid solo — but gone (or mitigated) is the character and flavor that makes the song compelling in the first place. This issue crops up again in Love So Soft where the background vocals once again provide too may sustained "ooh"s and "ahh"s or word echoes which smooth over rather than enhance the propulsive backbeat of that song. And again, it can be found in the back half of Retrograde, where some solid and imaginative arranging ideas in the front half are basically abandoned in a reversion to power chords yet again on the back half.

There are some exceptions to this unfortunate tendency and most of them come by way of arranger Hannah Lacava who — in Toxic, Shape of You / One Dance, and most effectively in Yeah! — demonstrates a real gift for fun and unexpected rhythms, both self-contained within the background voices and via interplay between the backs and the solo. My only regret is that Lacava's rhythmic playfulness is typically expressed as a single pattern rendered by the full background group. Someone who has such facility with rhythms and inventive adaptations/interpretations of existing material is capable of richer, more textured, and even more compelling arrangements with more layering and interplay of multiple rhythmic lines. Although she graduated in 2017, I'm secretly hoping she keeps a foot in our a cappella world.

It's also worth noting that of the nine songs offered here, four comprise the group's 2017 ICCA set which won the Midwest quarterfinal. I mention this because there are a few moments where this is palpable both in performance and style. I discussed the past issue of rigidity in studio production above, but the extent to which Toxic was likely rehearsed and rehearsed and then rehearsed again comes through here in a performance by the group that almost feels too precise. Dido's White Flag follows on this album, as it did in the group's competition set, and again, I have no trouble imagining why this was perhaps a successful choice for the ICCA — lush, big-group-blending sound in contrast to what came before, a chance to catch one's breath, a showcase soloist — but as a second song on the album it lets me down. The simplicity of the arrangement grows tiresome quickly and the slightly-too-strident/nasal tone of the soloist (vs the effortlessness of Dido, a tough act to follow to be sure) is more noticeable than it might be in a live setting.

Of course, the Whispers will always have a place in my heart, as a group I reviewed in my very first year at RARB (that I'd not previously heard of and was suitably impressed by). But as the bar in collegiate a cappella continues to rise, the group needs to up its game if it wants to be considered in the upper tier of the better groups. As beautiful and heartrending as the traditions of family, love, and musical dedication are, they are also rich and complex and nuanced and evolving — and the Whispers' music-making needs to be, too.

Oasis is an outrageously entertaining album. Not one song unfolded as I expected, and I replayed the album as soon as it finished. That's the mark of creative, skilled musicians making bold a cappella. That's 27 years of whispered ideas coming to a jubilant yell.

Cohesively, these nine tracks sound like something a hot new DJ would mix up downtown; each track is recognizable, but the fresh rhythms and danceable beats on the upbeat songs make everything quirky and alive, and the downtempo sounds maximize every measure with swells and starkly locking wall-of-sound chords. Britney's Toxic kicks off Oasis and has never sounded quite so funky or assertive thanks to Eden Diamond's lead and Hannah Lacava's playful score (it's so fun that Fever isn't even necessary). My favorite track creeps in early — White Flag is absolutely enchanting with its gripping precision delivery. There's nothing soft about this typically sad song coming from the Whispers; here it's bold and crisp and message-driven. Arranger Katie Greenberg had a vision of assertion; her Whispers definitely executed. Yeah! closes out the incredible triple-punch that opens Oasis, sounding somehow new yet still the same. These three songs are remarkably designed and performed. They'll simply never sound boring.

The rest of Oasis isn't as tight and commanding. Creativity runs the full course in Out of My Head, heard most especially in the spooky-cool male-female duet performed at the bottom of the performers' registers, popping in as a striking mid-piece transition. Much less refinement is heard on the following track, Shape of You / One Dance, which is quite frenetic and busy.

The Whispers/their producer like it loud and hot — especially the loud part. While a more defined sonic contrast would be welcomed throughout (I hear more of a choir instead of a clear choir + lead in Lay Me Down, as one area to improve), having the lead volume so close to the backs is especially detrimental in Retrograde. Perhaps I'm listening to the solo of the year, but I can't hear the nuances clearly enough to tell. Having background voices making compelling basement-grunge style effects only adds to my interest of this unique interpretation. It's really something, and not an approach I'd recommend to rookies. Nicely crafted, arrangers Greenberg and Lacava, and a heck of a job well done to soul-bearing lead Donovan Duggins.

With flashy vocals, assertive deliveries, and risky arrangements, there's a lot to process and marvel over on Oasis. Haven't heard it yet? Come join the fun.

The whole is greater than the sum of its parts. An idea that has been tossed around for thousands of years, and often an apt manner to appreciate the way seemingly trivial details fit together into something stunningly ornate. Going against the grain, Oasis proves that sometimes the parts can actually be more special than the whole.

The Mosaic Whispers are a co-ed group from Washington University in St. Louis who have been making music for almost thirty years. They have consistently produced impressive performances and recordings, but as with any collegiate group the revolving roster leads to a constantly evolving style. One way to subdivide the whole of Oasis is into two recording sessions. Songs recorded in 2017 are generally more familiar, straightforward melodies while songs recorded in 2018 are more moody and delicate.

Further subdividing the album, we get nine distinct tracks. The opening track is the most mundane. Fever is delightful but has been around forever, while Toxic is enthusiastic but utterly annoying; the mashup feels dated and cluttered. The closing track is the complete opposite. Retrograde is an atmospheric arrangement, a journey defined less by its melody than by its devilish interplay between subtle rhythms and thundering choruses. The other seven tracks fill out the spectrum, some corny and some clever without ever reaching the extremes of good or bad taste.

To get to the heart of what makes Oasis, we need to parse even more closely than the track level. As a track, Love So Soft is a melody that lacks intrigue and a performance that lacks dynamics. But the unison choruses are sweet and Samara Lillioja's solo riffs over the bridge are downright jawdropping. Yeah! runs the risk of being bland, but if you stick with it for 2 minutes and 24 seconds you are rewarded with Crystal Young's sizzling rap. Shape of You / One Dance is a fun super-pop mash-up, but what separates it from so many similar medleys is the way Ben Milan-Polisar and Young trade off leads to stitch together Ed Sheeran and Drake. These are just a few of the moments on Oasis that make listening to the parts even more enjoyable than the whole.

As a whole, Oasis can come across as mediocre. The song choices aren't particularly exciting or creative and the excessive use of background lyrics makes arrangements too dense for comfort. The blend is tight and the production is polished, but with digital tuning and sampling that sound is pretty much ubiquitous among college groups with a budget. Listen closely to the parts of Oasis, and you'll fall in love with the impassioned talent behind every note and the steady drip of brilliant techniques that make the Mosaic Whispers great.