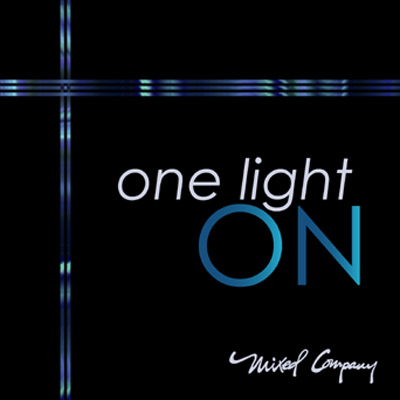 This album is a poster child for the importance of selecting good material.

Mixed Company's current incarnation has slid back a bit from their peak years of TheBus. That album featured busy, textured arrangements and nuanced solo work. On the new disc, the solos are fine but don't stand out, and the arrangements are straightforward and less complex. That means the onus is on the songs to make their own impression, because the interpretation isn't bringing anything extra to the table.

Is it any surprise, then, that the U2 cover is the best on the disc? Bono's boys have been one of the few big-selling pop acts that are also loved by critics. The Sweetest Thing is not the best U2 song out there, but it's got a nice hook and an endearing texture, and that infuses the Mixed Company rendition as well.

Mixed Company is a pretty good group, that's the thing. They sing well, they are mostly in tune, they're very competent. And yet, so unremarkable. It's like reading a compulsory essay written by an A student — innate ability puts a floor on quality, but there isn't the oomph or the panache to leave a lasting impression. Most of the songs they choose are no help. Toad the Wet Sprocket songs are never a good idea, particularly the dreadful monotone of Walk on the Ocean, and there's just not much going for covers of Live or Natalie Imbruglia, even if you have a sweet-voiced soloist.

I feel bad panning this album — it's clear the group put a lot of time and love into their music, and they have a fair bit of talent. But there's no way around it. They made a boring album. We'll just have to wait for the next one.

I loved Stanford Mixed Company's last release, The Other Side of Blue, which I had the good fortune to review. It was nominated for CARA awards, had a track on BOCA and was one of RARB's Picks of '01.

I can't say I love their latest production, One Light On, and I'm not sure if it will receive the same accolades. This album lacks the polish and precision that made The Other Side of Blue such a delight. The arrangements are of fairly uniform quality, but could have been executed with much more accuracy. Don't get me wrong; One Light On is an album that would be a step forward for many collegiate groups, but it is a step backward for Mixed Company.

The group is very energetic; it is clear they enjoy what they are doing. But the execution is a little off. There are too many pitchy moments (bridge in Selling the Drama, key changes in Can't Fight the Moonlight, random spots in the other songs). There are too many nasally parts, some deliberate (syllable choices like nir and bir) and some unintentional (on ahhs and oohs). Nasal backgrounds are hardly ever a good thing. They destroy blend, and draw attention away from the solo.

Mixed Company has 12 out of the 13 members solo on the album. I agree with this choice. Too often a group has 4 or 5 soloists on the entire album. My faves: Ben on Best I Ever Had and Eddie on any falsetto part of Sweetest Thing.

My only suggestions here are that the female soloists should eliminate nasal tone and the soloists need to sing like themselves. On songs like Perfect Day, it is quite grating to hear a Stanford girl try to sound like a girly, nasal blonde. There is a reason Hoku's music hasn't caught on. Don't try to sound like her. Try and capture the feel of a song, but give it your own interpretation. When the original soloist has a particularly nasal, girly, raspy or otherwise distinct voice, I suggest trying recording the track with and without mimicking, then take a listen.

The vocal percussion is subtly effective. It enhances the music without overpowering it, a method some groups use to mask weak arrangements or lack of energy. I also enjoyed the subtle use of studio effects.

The song selection on the album is half femme music, half not. Torn is overdone, but I liked the arrangement and the soloist's soft voice. In Walk on the Ocean, Mixed Company has chosen a Toad the Wet Sprocket song that is not Windmills!! Goodbye is very interesting musically — it changes pace and style — but the jazzy sections needed to be smoother and tighter.

The latest CD by Mixed Company, One Light On, is like your favorite alternative band from the '90s. The album is good, it's catchy, it's full of energy. But it's doctored, edited, and reworked for mass consumption, and you're left with the feeling that it just isn't what the group would sound like live.

Mixed Company has produced a fine CD with their latest venture. One Light On is bold and innovative, a strong effort which could possibly associate them with the top echelons of collegiate a cappella. Their arranging is fantastic, complex, and flows from the singers with a purity of vision not commonly encountered in a group of 13 members. The harmonies are fantastic. And the clarity is exceptional — each part has its own distinct sound, yet easily entwines with the others to create a rich lushness. Vowel precision is evident in every syllable. I was particularly impressed with percussion throughout. Most of the tracks, but Hunter and Can't Fight the Moonlight in particular, made me so certain they cheated and added instruments that I had to ask the group.

The real forte of the group, however, is its production. This album was loved and cared for, and some people must have put some serious time into its creation. The mixing is impeccable, with strong bass parts, lighter top sounds, and clarity of sound in the middle. No part is overpowering. Solo parts jump out and are placed within the sound fantastically, with innovative use of cycling, overlays, and especially placement of sounds within a stereo mix. You get a sense of placement from each voice.

Not that the group is perfect. One consistent complaint is soloists, clearly the weakest part of the group. Most of the time, the soloist just isn't up to the task of the solo, with the most notable exception being Eva Patil in Hunter. This track is clearly the strongest on the album; it was apt they chose the title from this gem. Many soloists (such as Jon Shih in Here's to the Night) try to sound too much like original artists, thereby creating an unnatural or forced sound. I think they may have over-processed solo tracks, because compression is often evident. They could also use some work in song ordering. They tend to put their, in my opinion, best and most enjoyable songs in the beginning, letting the energy of the album fizzle as it goes along. If you stopped listening after track 2, you'd be left with a much better impression of the group than after the full album.

My biggest disappointment, however, is that the album just doesn't have the energy the group is capable of. Listening, I got the impression that the group takes itself way too seriously, which if one reads the liner notes, is clearly not the case. In American Girl some of their natural energy and zeal emerges, and for a few minutes this CD filled me completely with its achievement. If the group can recapture some of that rawness and export it to other lacking songs, there'd be no telling where they could go. In striving for perfection with their superb production, they lost some of their essence. I also felt the group miscaptured the essence of Torn, taking it too slow and misconstruing the feeling of the original song.

Final verdict: I direct a coed a cappella group. The album should be praised as a teaching tool for the coed world more than as a listening piece.