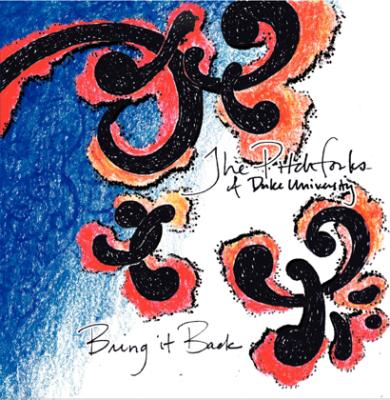 Man, the Duke Pitchforks have come a long way since my first Pitchforks review, Bad for the Piano. I'm happy to report that the Pitchforks no longer need a pitch fork, nor is this album a danger to our nation's nocturnal highways. For the first time, I feel that the Pitchforks are a real a cappella group with a real album. Bring it Back is an album with substance, and it shatters the group's two previous works.

Introduction is an original song, half '80s rock anthem, half rage-rock rap. The intensity is obvious, with a moody intro, brooding chord structure, and cutting enunciation. The album takes its name from the song lyrics Bring it Back, which I interpret as the group issuing a challenge to itself. This is a group determined to make a mark.

The First Single is just plain fun. A spirited tenor solo voice tosses around a pleasing melody line that moves in unexpected ways. The background is as unpredictable, with syllables ranging far and wide through a nicely contrasting textures syllables. This unconventional song and its fun double clap grow on you until you smile and sing along.

The gutsy male chorus of "ah luh ah luh ah lah lahhh" of Used to Love U must have been grinning fun to rehearse. From top to bottom, this song just oozes with strong, male voices. An adept bassline, stylish solo, and an entire group that just "gets" this song makes for a groovin' tune. A cappella covers of R&B can be mind-numbingly repetitive, but the 'Forks keep verses fresh, paring back the second verse and adding a stuttering arpeggio and solo harmonies in the third verse. "I don't love you, not like I used to" never sounded so good.

Tribute is fundamentally a joke. Kids, it's time to let go of this song. And now, with this version, we can finally do just that. The shiny demon's voice is shiny and demonic. The rock-out soloist has a rock voice that could grind glass. The bridge, frankly, is awesome, with a pokey panoply of pure vowelled "ah"s behind a fugue of nonsense syllables ("yuh guh gunk, gee, uh guh guh guh guh guh gee, fleegle geegle uh fleegle geegle guh gee").

Parachute features a perfect pairing of soloists. More complementary voices and emotional tones would be hard to find. The song is built beautifully, with a slow, languid build to a crescendo of emotion that your body is crying for by the time it arrives. Guster would be proud.

Nevermind is jaw dropping. Like the quieter, moody songs off Radiohead's OK Computer, the song has a beautiful surface that barely caps the rage of swirling emotion underneath. My jaw drops in shock that it's an original from a collegiate group — it has the maturity of many more years. Andrew Booth and Joseph Bates have blessed us with a gorgeously textured song. Booth's solo melodies leap and plummet, soar and ebb. The background "oh"s and "doo"s wash to the foreground and back, generating tension. The bridge introduces an arpeggio of keyboard "dih"s and a wash of "wow"s that Booth brushes aside with a suddenly deadly serious sneer of a melody line ("When two wrongs don't make a right, you try three."). The melody line steps up in intensity with each interval, and I gripped every falsetto note through clenched teeth. The song ushers out with a rotary and delay effected flute-like arpeggio and brushed snare — very Radiohead. The song builds you up and allows you to land, just as you realize you were holding your breath.

The cathartic release, then, of Muse's Hysteria is just what your blood pressure will need. The soloist's voice is very Muse-ish — whiny and intense. The arranger brings up the choruses and relaxes the verses through classic volume and tone techniques. The "juh juh" of the rhythm guitar line is edgy and the testosterone rages through a ragged "wow!" that ushers in a glottal bassline in the early bridge. We have just enough time to wonder why the tempo is slowing through such a cool, dissonant chord progression for an ominous Soviet men's choir and immense war drum to completely stop the song. The "jeh neh jeh" guitar rips us a little too abruptly back into the chorus, but the overall effect of the song is novel.

Unfortunately, these gems are just one third of a rather long album. The majority of Bring it Back is decent songs sung solidly, but I question the group's choice of Your Song, Black Balloon, and Take Your Mama Out, which have been covered too many times. Belief and I'll Rise are a little snoozy.

Still, the Pitchforks have brought it back. The group has raised its total intensity and earned some glory in the process. The more I hear Bring it Back, the more I like it.

Two years ago, The Pitchforks of Duke University's latest recording Bring it Back would have easily garnered a 5 from me. A 5 with high praise, even. Technically, it's a superior album. The production values are high, with very crisp edges at times and a lush fullness that sounds great to the ear. The tuning and balance between the voices is near flawless — to be expected when your group is directed by Joseph Bates and Stephen Clark.

But that was two years ago. Now, while not sounding average by any means, that extra spark is missing. The community (especially in the collegiate arena with today's super-producers) has established a higher threshold of quality. What used to be innovative, is now commonplace for most groups that put out fairly well-received recordings. And I do believe that Bring it Back will be on most people's hit list come CARAs-time. I'm just not in love.

What I'm missing is that emotive force that pulls the listener in at the beginning and leaves you out completely depleted with the ringing of the last chord. In a word, emotion. The guys seem intent on just sounding good, with nothing out of place, nothing left to chance, nothing experimental. There are no velvety soft pianos and ear-bending fortes that would have made the album really interesting. Instead, we get a safe recording of mostly mid-tempo rock ballads and pop ditties. I'm left slack-jawed with disappointment.

Gems do abound on the album, though. Four standouts in particular: Used to Love U, Nevermind, I'll Rise and Mala Gente soar beyond the scope of collegiate a cappella. Because of these masterpieces, the rest of the album is all the more frustrating to me. Mala Gente has the extra kick of being in a foreign language. For some reason, it was the catalyst that made the guys succeed in bringing bravado and swagger to this dance number. I'll Rise had just the right amount of emotional rawness and purity of conviction that makes listening to it an experience. You can't help but feel the spirit when singing Maya Angelou lyrics. The guys know it, and you can feel the difference in their performance. Used to Love U was simply the first time that my mind actually registered that something was playing out of my speakers. Gritty and sexy.

But the crème de la crème, without a doubt is the original song Nevermind by Andrew Booth and Bates. Sublime lyrics by Booth, a haunting melodic structure and soundscape by the duo and possibly the solo of the year by Booth dug in deep. Not simply an earworm song, you may actually carry it to your grave. If the last T1 "ah oo" at the end doesn't evoke every bittersweet heartache you've ever experienced. (Man, I'm spent just writing about it.)

On the flip, bringing out tired tracks like Hard to Handle (with the inexplicable addition of Evenflow as a bridge), Black Balloon, Somewhere North, Tribute and Your Song was not a strong move. Notwithstanding the BOCA recognition of Tribute, all of these tracks have been immortalized by other groups. So in comparison, The Pitchforks fall flat.

Just in passing, I'd like to give a congrats out to whoever thought of the idea to start cross-promoting albums with Out of the Blue. Their rendition of Breathe is a solid addition to Bring it Back while also continuing a great relationship with The Pitchforks' sister group. The ladies kicked off the generosity by adding Mala Gente to the end of their last album Walk On.

For some people, Bring it Back is going to be the best album they hear all year. And I strongly suggest that people pick up a copy. I just hope that next time, the "it" the guys bring back is "emotion".

From the folks I talk to, Bring it Back was a highly anticipated album. Mixing then-collegiate wunderkind Joseph Bates with the southeast's reigning king of production, Dave Sperandio, is bound to bring success right? Bring it Back answers a resounding yes.

As much as I avoid making direct comparisons from college group to college group, I can't help to make one in this instance. Listening to Bring it Back is almost exactly like listening to UNC's Clefhangers with better arrangements and slightly worse singing. The feel, the production, even the repertoire is all quite similar. If collegiate a cappella had its own boy bands, the Pitchforks and the Clefs would be in the running for Backstreet and 'N Sync.

Even with the comparisons, this album is excellent. Arrangements are incredible; almost all have been penned by Bates. Soloists are good but other than Christopher Lord on Mala Gente and Chris Bryant on Used to Love U there isn't anything spectacular. Production is rich and creamy, both from the singers and from the engineers. The sound is full, especially the bass which is dropped unbelievably low and powers the album from start to finish. Energy is pretty good, but I had the same problem as I had on the Pitchforks' last release, Honestly: too many ballads. In particular, I felt Belief, Parachute, and Black Balloon could all have been cut, especially given the album's length.

The highlight of the album is Nevermind, an original by Joseph Bates and Andrew Booth. It makes the crap you find on the radio today feel like music for toddlers. It's expertly crafted, woven into a textured sound web that just stays interesting no matter how many times you listen to it. The unique chord progressions, the cyclical backing parts, the eerie solo, the beautiful production and tasteful reverb; there's nothing not to like about this excellent track. With material like that, I don't know why the Pitchforks even bothered to do any covers.

I give great props to the Pitchforks for offering the closing track to Duke's women's group, Out of the Blue. That's a classy move all the way.

Bring it Back is another great album from the Pitchforks. The past few years have delivered a slew of heavyweight albums from Duke, only further tilting the balance toward the South region serving as the new a cappella Mecca. Since Bates has graduated, it might be difficult for the Pitchforks to keep up such a great product, but I look eagerly toward their next effort.