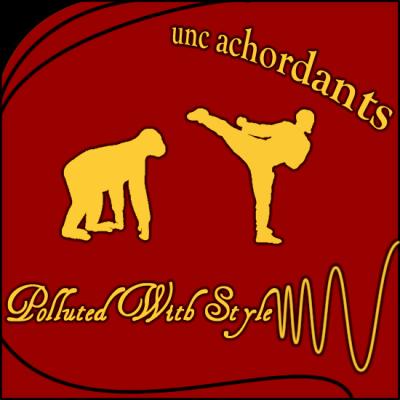 The Achordants are more occasioned by style than polluted with it. Edgy, interesting tracks like MacPherson's Rant and Army and universally appealing leads like those on High and Dry and Why Georgia make Polluted with Style an enjoyable listen.

Sometimes the contrast of darker tracks like Spit on a Stranger with the cornier if not well-delivered tracks like It's Not Unusual leave the listener wondering about the true identity of this group. Alt rock? Oldies? Pop? Thankfully, consistently strong delivery makes the mash-up of styles easier on the ears.

Smooth production and interesting arrangements also help the Achordants to stand out from the crowd. But the CD's programming would have been better served by front-loading the edgier tracks and then transitioning to the oldies and semi-oldies.

Bonus track? Seriously? This must be the last group to get the memo. Save the cartoon voices for the website. It's cute, but goofy tracks following long silences is like telling everyone about the last "Friends" episode you watched. It's kinda done.

Bonus track aside, I really like the Achordants. I think most listeners will feel the same. Polluted isn't novel enough to be the next big thing in aca-land, but it's solidly musical, stylistically diverse and driven by truly enjoyable arranging, production and leads. This is a group just starting to take musical risks. When the Achordants get ready to leave the familiar and venture into really new musical territory, this will be one group to keep close tabs on.

This review is brought to you by the number 3.

I realize that may seem a bit harsh, but at RARB, the number 3 represents "average" and that really is the best way to describe the UNC Achordants' Polluted with Style. By today's standards, this is pretty basic, all-male, collegiate a cappella at the OK level, nothing more.

In perusing the group's website, I did have to wonder how much the group has changed, or perhaps declined, over the last two years, since these are the same Achordants that represented the Southern region in the 2005 ICCA finals. That, or perhaps they put on a helluva live show and that doesn't come through in the studio.

Fully 75% of this CD is arranged by Yuri Broze, and one could certainly argue that this is part of the problem. Broze knows the basics of sound arranging to be sure, but beyond that, there is very little complexity in the way of layering, vocal/dynamic texturse, counterpoint or the use of any other techniques that would make this CD a compelling listen. Virtually every arrangement is bass line, some form of VP (ranging from the very basic and ineffective to the not bad and reasonably effective), the solo line and everyone else singing a chord on a "bah", "doo" or "oh" in a unison (or almost unison) rhythm. And forget any sort of development or "build" in the song — in most cases, there ain't any.

Is there anything above average to be found? Sure. As a group, there is definitely good energy to the Achordants sound, even if what they're singing didn't hold my ear. The soloists sometimes rise above than the material — Phillip Childers, most notably, on High and Dry and the trumpeter in Mala Gente which isn't pitch perfect but is a lot of fun. Speaking of pitch, Dave Sperandio does what he can on the production side with what he was given, though I did wonder if the group may have recorded in sections rather than individually as there were unison moments in certain voice parts, especially the basses, where the guys didn't quite sound in tune with each other (!). I have to believe Dave would have fixed that if he could have done so. As for whole songs, I'd give Use Me and Why Georgia high 3's (borderline low 4's), the former for the solo and the rare use of multiple layers in the arrangement, and the latter also for multiple layers as well as some subtle background "feel" changes in each part of the song.

Again referencing their website, "The UNC Achordants have striven to embody the best in a cappella music and Carolina in general, combining a dedication to performing as wide a variety of music as possible in as wide a variety of locations as possible...with their dedication to promoting their sponsor, Campus Y, mission of service, all while remembering to never take themselves too seriously."

Commendable to be sure, but to earn better scores from this reviewer, they might have to consider taking their music-making, or at least their recording, at least a little more seriously.

Mary Moon, a cappella bagpipes, and an ode to beans. Yeah, Polluted with Style is a pretty good time.

We all know that having a great opener can set the tone for a great album, and the Achordants chose wisely with catchy, well-sung New Age Girl. The song is a fun mix of playfulness and testosterone, creating and instant likeability for the guys from Chapel Hill. Their likeability continues with Brandy, the beloved favorite that will make you nostalgic even if you've never laid eyes on the sea. And then, and I can't believe I'm reporting this, the Achordants boldly wear hypothetical kilts to blare a cappella bagpipes in MacPherson's Rant. It's kooky, it's neat, it's something you should hear. The distinctive clean singing and minimal production is also something you should hear. It's nice to see this approach succeed without losing excitability.

Polluted with Style has more charms for you. Soloist Phillip Childers shows off his chops on High and Dry, with graceful, well-placed high notes that will make you shake your head and whisper "whoa". The great rhythmic setting and soulful groove on Use Me will please your ear, and the harder rock of Three Libras is intense and welcomed among their softer tunes. And be sure to give Why Georgia a careful listen, enjoying the fine vocals on this popular song.

A few low points hold the Achordants back from really shining. There is such a thing as being too chill, as being too laid-back, and the dangerously slow tempo in Dock of the Bay demonstrates this. And that's a shame, because soloist Atrayus Goode earns his name and then some. It's Not Unusual was too cheesy, evoking images of jazz hands in my head. And though Spit on a Stranger has a wonderful melody, the trembly vibrato from the soloist distracts too much for this ballad to work.

But all said, the Achordants have produced a debut studio album that's far above a standard first release. Polluted with Style is certainly worth your cash.