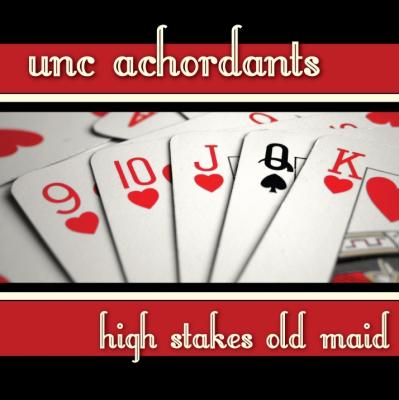 UNC Achordants's High Stakes Old Maid: I love them. I hate them. They're hurting my brain.

If someone played just the leads, you'd never think that this was collegiate. It's too good, too mature, too expressive. You'd think, these guys can make any group sound kick ass! Who even cares what the backups sound like!

But then you hear the backups and ask: what the hell is this crap?

The backups are sung with dynamics, with energy, and with solid intonation and blend. So what's wrong? The backgrounds don't serve the songs. Background nonsense syllables like "joh" "doh" "dee" "doo" and "bum" are precisely enunciated as if they were more important than the leads (which if sung that way would have been comical). Worse, these nonsense syllables are then shoved in the listener's face; they're hotter in the mix than the leads. It's beyond distraction. It's gross. Nauseating. Criminal. Bewildering.

I have to admit that the Achordants are so consistent and aggressive about this grotesque juxtaposition of awesome and suck that they've got me doubting myself. After multiple listens, I start to think, "No. I'm wrong. I have to be wrong. It's ... supposed to ... supposed to ... sound ...clumsy. They were going for clumsy."

Perhaps it's like impressionist paintings being critiqued for lack of clarity.

Better yet, it's a bit like asking whether punk "should" be sung out of tune. Do we overlook intonation in punk as unimportant — or even deliberately aim for poor singing in punk as a further rebellion against all that is status quo? Is that the state of collegiate a cappella? Is replacing standard musicality with loud, stupid syllables the "point"? Is this the punk of the aughts? Does that half-moon configuration with the pitch on stage left camouflage the stealthiest coup d'état in musical history?

Hell if I know. I can tell you that no other group has ever made me wonder about it so vehemently.

Worshipers at the alter of "din, din, shuh din doh dah doh ah...jah jigga digga jah dah", you will claw off the shrink wrap and make mad, passionate love to this CD. Those possessed of more mainstream musical sensibilities will admire the killer leads, bemoan the distractions and question the very fabric of a cappella reality.

High Stakes Old Maid sounds a lot like Polluted with Style, except more refined, more "Let's really bring it this time." You'll hear harder arrangements and more diverse soloists. You'll hear the group's extra close attention to musicality, their excellent balance, and you'll really hear their insane energy level. And even though the awesome bagpipes have retired, the Achordants have enough air to wail without them.

The lack of flashy studio effects on High Stakes Old Maid means you experience the Achordants as you would in the wild. There's a marked focus on dynamics, which you'll hear from the get-go of Carry On Wayward Son to the end of their customized Mack the Knife. It's really refreshing to hear natural dynamics, isn't it? The extreme dynamics of The Sound of Silence not only gives this song a new vibe (Simon and G-Funk never sounded this intense before), but also exemplifies the group's wonderful blend. There's a prevailing singer-to-song connection on their tracks, like the carefulness and seriousness of captivating Hide And Seek. And how about those hot basses on Long Train Runnin', and the authentic Boston guitar on More Than A Feeling? Man, this is good stuff.

Though everyone loves a romp in the wilderness, there's always a risk of danger when you stray from camp. Those sloppy triplets in the beginning of Such Great Heights distract from the coolness of the intro. Crazy sounds pretty ordinary compared to earlier antics. The occasional late cut-off sticks out here and there. And though listeners who were teenagers in the '90s will get a kick out of Sitcom Medley, and it's sung very well, the five and a half minutes it takes to visit Zach Morris, The Fresh Prince, et al., is time better spent on more engaging material. But, the Achordants are still having fun doing their thing, and you'll certainly be entertained.

High-powered and refreshing, High Stakes Old Maid isn't a gamble at all: this is a great album.

The UNC Achordants' newest album, High Stakes Old Maid, reeks of long nights of rehearsals and drinking (root beers, of course). You can almost see the bottles scattered throughout and envision the guys staggering in with the bright light of the morning pouring into the dark quarters of the studio. And rather than needing a voodoo hangover concoction to right their ship, they come together, take a deep breath, and tackle classic rock stand-bys such as Carry On Wayward Son (Kansas), Long Train Runnin' (Doobie Brothers), and More Than A Feeling (Boston) as if these pieces are part of their inner being. Scattered across the surface you'll also find Gnarls Barkley, Simon and Garfunkle, Imogen Heap, and the oddly popular song Mack the Knife. I enjoy the variety these gentlemen bring to the table, but their greatest strengths currently reside within the classic rock genre.

Soloists within the aforementioned classic rock genre are spot-on. Phillip Childers (Carry On Wayward Son, Long Train Runnin') and Alex Barnes (More Than A Feeling) were born a decade or two late, naturally providing the vocal power and agility necessary to sustain the believability of these songs.

Ensemble pieces Hide And Seek and The Sound of Silence are very good but would be even better with more attention paid to group balance and making sure specific voices aren't pushing the tuning out.

Arrangements are standard block fare with the occasional ornamental line thrown in here and there for good measure and improved variety. Medleys are difficult to write, mostly due to the variety of key changes the arranger must navigate, which usually leaves the meat of the arrangement (syllables, more complex rhythms, general creativity, etc.) a bit to be desired. Sitcom Medley takes you on a trip through '90s television shows such as Fresh Prince, Saved by the Bell, and several others I knew the words to but couldn't name the show. Using "ah"s and "ooh"s in the backgrounds relegates this track to a one- or two-listen novelty, although those listens were quite enjoyable.

High Stakes Old Maid is not perfect, with the occasional voice poking its head out at the wrong moment. The Achordants probably won't be found on any must-have lists in the aca-community, but I'm glad I was given the opportunity to be introduced to them. Any group attempting Kansas, Boston, and Doobie Brothers classics with a solid mix of just about everything else will always grab my attention. The Achordants and High Stakes Old Maid end up coming out of the wash slightly above average. These guys have heart and enjoy singing. The casual listener will want to take a pass here, but if the Achordants spring for a themed album of entirely classic rock pieces they can certainly turn heads. Can we say "The UNC Achordants perform Guitar Hero" for their next album? It would be an album this reviewer would certainly be looking forward to.