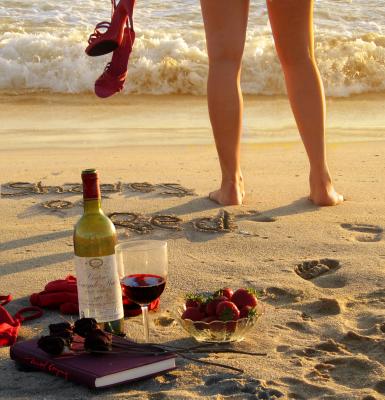 It's been six years since I reviewed The Other Side of Blue and unfortunately, as evidenced their declining RARB scores for their two original albums since then, it seems that the intervening time hasn't been entirely kind to these a cappella folks.

My biggest quibbles six years ago concerned repertoire choices and a lack of feel for the material. Shades of Red has some of those issues, but its most notable flaws are far more fundamental. Quite simply, there is a good deal of sloppy singing and tuning on this album as well as a palpable lack of energy to many of the too-slow arrangements or their performances, and sometimes both. As the bar seems to constantly be on the way up in collegiate a cappella, poor execution in these areas are impossible to overlook and cannot be compensated for simply by fancy processing courtesy of Bill Hare.

The examples are pervasive but particularly troublesome are the bari-tenors in almost any moving passage in which they are exposed, and the sopranos' articulation and tuning at the extreme high end of their ranges that is sometimes shrill, sometimes flat, but not often pleasant. The altos don't escape unscathed either, though they are harder to make out in many of the arrangements and therefore more difficult to critique — their lazy singing in the horn section of Sway though did not go unnoticed. The basses escape without too much criticism because they have been processed so heavily that the heavy lifting has already been handled by Mr. Hare (whose usual ability to spin raw sonic material into gold, I have to believe, had to have been hampered either by time, money, or the manner in which the raw tracks were originally recorded).

With a different group, my tuning issues might be mitigated somewhat if they were overshadowed by mind-blowing energy, fantastic take-no-prisoners soloists and arrangements that, even if not always perfectly rendered, were interesting and engaging. Sadly, Shades of Red features very little of this. We get aural glimpses of solo talent from Jackie Weiss on This is How a Heart Breaks and from Lauren Hayes on God is a DJ. And This is How a Heart Breaks also gives us a rare moment of arranging pleasure right at the top. But more often than not, the tempi are painfully slow (the Disco Medley is set at an interminably laboring pace), the arrangements are too basic (the aforementioned medley as well as Lovesong, Brighter Than Sunshine, et. al.) and the overall energy just isn't there (choruses like the hopefully-soon-to-be-retired Stacy's Mom that need to explode with enthusiasm barely raised my blood pressure if at all).

And at the risk of piling on, my most nagging complaint about the album is tone — specifically, rounded ones. I don't know the backgrounds of the group's sixteen members but at least from this CD, I daresay they have quite a bit of training and/or theatre experience among them. If they were singing vocal jazz or classical or barbershop or more traditional fare, I have a feeling their sound would be miles better from what is heard here. Indeed, their Indigo Girls track (Love Will Come to You) is not terribly compelling but the song and the sound matched up nicely. But that same tone applied to Joan Osbourne and Aqualung and The Cure doesn't yield the same positive results.

Mixed Company's last CD was a greatest hits compilation spanning the group's 20-year history. Shades of Red is likely to appeal to most of the same folks who purchased that CD — friends and family will be proud, but the rest of us will skip it and hope Mixed Company can return to its former excellence with the next one.

Radio-friendly mixing can't hide the fact that Mixed Company doesn't seem to know what it's doing. Shades of Red is full of rookie mistakes including weak solo performances and lame arranging ideas. Though I can't escape the suspicion that Mixed Company wouldn't sound half as good without the rescue of a certain Bill Hare, there are hints of greatness that leave the album frustrating.

Too many soloists on

Shades of Red is rife with arranging ideas gone awry. Disco Medley would be better named The Worst of Disco Medley. The four songs of this medley are surely the hokiest and most cloying to have escaped the disco era: I Will Survive, It's Raining Men, Dancing Queen, and YMCA. The transitions between each song are awkward, requiring some wacky adjustments. I cringed throughout the medley, but I nearly gagged at an utterly emasculating moment of It's Raining Men. The Weather Girls list types of men and the guys soli, "Here we are for yuh-or pleasure". Two tempo changes interrupt the well-established groove of Sway. The soloist makes the adjustment, but the backgrounds sound clunky in comparison. Ladder is anticlimactic, rehashing the same lyrics "I'm gonna love you anyway, today and ev'ry day" and vamping them into a mushy oblivion. A more disciplined arranger might have cut the last minute of the song or a creative soloist could have rescued it with new directions for the melody line. Stacy's Mom has excellent texturizing derived from both the arrangement and the mixing, but it's ruined with a bizarre bridge. Dry equalization of a My Girl interlude is a brilliant visual cue evoking a daydreaming teenager, but the lyrics, "What could make me feel this way? Stacyyy's… motherrr…" have gone too far. The last chorus relies entirely on wispy, head voiced sopranos, some half-hearted clapping, and the campy "Stacy, can't you see, you're just not the girl for me".

It's easy to discount an album that is wholly weak, much harder when that album reveals potential in songs like Sway, Such Great Heights, and God is a DJ. Sway's soloist is captivating. Her performance is gorgeous, with a breathless tone and lovely vibrato. She's a torch singer, gripping our attention with a swaying, swooning style. Her range and versatility are amazing. She's a sultry R&B singer in her low range, a crystal clear belter in her chest voice, and a feminine sprite in her wispy head voice.

Bill Hare reverse engineers the feel of the original Such Great Heights with a bouncy intro that pans wildly, a jagged, Atari-like bass line, and uber-clean Euro drums. The soloist sings urgently, with breathless delivery, crisp enunciation, and a voice that is appropriately non-mainstream. The women are invaluable in their supporting role, with well-blended, pure vowel highlighting and beautiful suspensions in the 45 second deconstructionist bridge.

An unrelenting soloist powers through a flawless arrangement of God is a DJ. The soloist has undeniable presence in each verse, expressing meaning into the lyrics. She smiles ruefully through "you can't take back what you've done". She has a power belting voice up top and a mean/ugly tone on the bottom — perfect for Pink. The arrangement misses no opportunity for harmony, with excellent solo harmonies in each verse and great dissonant suspensions in each chorus. The song calms during a pure-voweled, girl voice choral section before exploding into the final chorus.

With Shades of Red, Mixed Company has put out another mixed album. The lows are low, the highs are high and it all sounds slick at the superhero hands of Bill Hare.

Largely an album with compounded issues, Shades of Red is too shaky to recommended for purchase.

The album opens with great promise. We Are is an interestingly dense arrangement that is sung in an appropriately aggressive style, and offers the ear a nice dose of production effects, too. Sway will have you hunting for a dance partner with its fun tempo changes and sultry soloist Natasha Chen. But Lovesong introduces the first main issue: weak soloists.

Below average soloists who compromise the songs' outcome appear throughout Shades of Red. You don't have to be an amazing soloist to succeed in a studio — turns out an expensive microphone really helps. But if you sound scared or timid, as the soloists on Love Will Come to You and Such Great Heights do, your work becomes uncomfortable for the listener to hear. Do whatever it takes to be bold, do whatever it takes to create a smooth, supported line. Conversely, a few soloists on Shades of Red are trying too hard — Sarah Loaiza could work toward warming up her tone in Disco Medley, and while Conor Mayo-Wilson's tone is beautiful, his wide vibrato distracts on Brighter Than Sunshine.

The second main issues on Shades of Red is the a general lack of editing, leading to songs that are both too long and too uninteresting to continue past the standard pop three and a half minute mark. The first culprit is Disco Medley, which I would have left off this album altogether. It's difficult to create a medley that's both fun and surprising: Disco Medley is neither, and contains a lot of serious vocal problems, too. Ladder also feels too long, and could be improved with more variety from the soloist to close the tune. The Walk succeeds in captivating the listener, but again, could use a little trimming to take it to the next level. And I firmly disagree with the decision to include a bad spoof of My Girl in Stacy's Mom.

Near the end, edgy This is How a Heart Breaks and Addicted showcase a stronger side of Mixed Company. But in the end, Mixed Company must work toward better musicianship if they want to hold their own against the stronger Stanford groups.