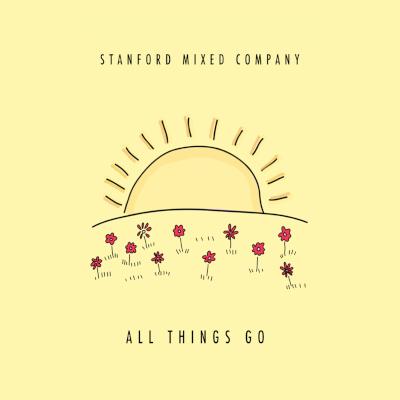 All Things Go is a great assortment of well-produced songs that sample from all over the spectrum. And honestly, there's absolutely nothing wrong with that in our age of concept albums, and middle-of-the-road, singular genre projects. While few tracks operate on the same musical wavelength, as a whole, the album gives its listeners an authentic, fun, and emotional look at the artistry of Stanford's Mixed Company.

For starters, much of All Things Go has a great deal of depth behind its musical selections.

Bellyache may just be the most complete vocal track I've listened to in 2019. It's highly nuanced, offering beautiful vocal textures and shaping across a rich and full-sounding arrangement. Both of Mixed Company's leads come in clutch, as their Indie pop stylings translate extremely well to the current musical climate. Pair all of this with the pure and cohesive singing from the backing group and it's a match made in heaven.

And if the album's opener doesn't hook you, then head on over to the two tracks which comprise the soul of the entire project, G Train and Weight In Gold.

Both are relentless in delivering nonstop emotional conviction. G Train marches the listener along with methodical pacing, its subtle yet impactful soloist, and a backing sound that offers loads of personality, vocal effects, and precision in terms of chord execution.

Weight In Gold offers the listener just the opposite as it starts off slowly, yet dramatically, taking you to church with its exhilarating lead, momentum building arrangement, and wonderful use of silence. And fair warning, the key change at the song's end is sensational!

Other tracks also do a great job of showing you how capable Mixed Company is of running the table.

I Miss You is an emotional stunner that has a profound way of delivering both pain and beauty through some rather breathtaking singing. Boy is laden with gorgeous runs and harmonies, showcasing otherworldly female vocals that are straight-up empowering. And Toxic has an endless supply of musical gems from its immaculate and creative opening all the way to its monitor-rattling bass.

While so much of the album deserves praise, it's the minor details that cause concern. All Things Go has a slight issue with creative stamina. There are multiple tracks which exhaust their creative muscle in the opening or secondary verse, leaving you wanting so much more artistically by the end. While several songs succeed on individual elements (arrangement, production, etc), they lack a sense of cohesion and emotional progression from start to finish. These lesser tracks simply fail to connect with me emotionally even though they are well-sung songs.

In any case, there's no denying the musical talents of Mixed Company, which is evident on All Things Go. The group has given its listeners a well-orchestrated, hard-hitting collection of songs that will spark enjoyment with anyone who takes a listen.

All Things Go was my first go-around listening to Stanford's Mixed Company, and I have to say I'm pleased by this first impression. It's an album that very much checks off a lot of the essential boxes: great song selection, high and consistent energy throughout, and dynamics that direct each of the songs. While I don't necessarily hear anything on All Things Go that reinvent the wheel or starkly differentiate the album from other pop-based albums, I still find myself bopping my head quite a bit, which is usually a telling sign of a solid project.

Right from the beginning, the intro Bellyache exemplifies a lot of the group's strengths in overall blend and dynamics. There's sometimes a tendency in vocal groups to over-arrange simpler minimalist songs as a way to differentiate an arrangement. I really appreciate how Mixed Company resists the urge to cram every space with sound and instead preserves a lot of the subtle smoothness of the original. I also appreciate the attention to detail when it comes to volume, with the group opting to give itself room to grow into the healthy boisterous peak we hear around 3:25.

Boy is delightfully catchy, and again showcases excellent use of dynamics to build tension and excitement. The sequence between 0:56 to about 1:26 probably best illustrates this, where the bass and perc peel away for a brief moment before the top parts soar to a definitive climax which is really well done. The production on perc throughout should also be recognized for supplying the much-needed texture and bounce.

I Thought She Knew is another personal favorite on the album. A welcome break from "den-den"s and "jeng-jeng"s, this N'Sync throwback should aptly quench your thirst for vintage boy band era crooning. I enjoy the blend and tuning of the background throughout. The mix is tight and the warmth of the vocals (particularly in the low end) creates a nice supported unified wall of sound.

In all, it's hard to see why All Things Go wouldn't delight ardent pop lovers. Between renditions of some of the best of Billie Eilish, Maroon 5, N'Sync, and Brittney, there's a quite a significant range of styles and energies to hold your attention.

All Things Go is a refreshing change of pace. This album is a stark contrast to many of the dark and angsty productions that are commonplace in the current collegiate a cappella scene. This new release from Stanford University's Mixed Company is fun, bright, and energetic.

The first thing to notice about this album is just how clean it sounds. Across the board, the soundscape is very polished. Consider the track G Train. There are many different layers throughout the arrangement. However, it's obvious where the attention should be. The beat is driving, but not overpowering. The sustained vocals set all the chord progressions for the soloist to operate with the help of the rhythmic vocals. Elizabeth Gray, Matthew Baiza, and Alexis Lowber penned an arrangement that could very easily become oversaturated with too many different patterns all stacked together. However, the sound engineering and the great execution by the members help the performance remain soloist-centric.

However, I have an issue with this album as a whole. As I listen through the songs, nothing feels new. From deconstructed openings to structures of chords in passages to even the overall story arcs, most of the album feels recycled from relatively recent a cappella history. The only areas that fail to circumvent expectations are the uses of mashups in Boy and Maroon 9: Harder to Breathe / This Love / Payphone, which are almost detrimental to the songs because too many ideas are being introduced without being completed. I'm not opposed to taking inspiration from some of the best recent releases, but this album has many of the same elements of recordings from five or more years ago. If you don't believe me, listen to many of the upbeat vibrant tracks from Best of College A Cappella (BOCA) albums between 2012-2016 and Mixed Company's Symphony. They sound very similar.

When it comes to scoring this album, much of the score depends on what is considered "average". Compared to many of the releases from the mid-2010s that this album mirrors, this 2019 product is by all means a stellar album. Compared to the albums over the past five years that have been products of groups experimenting with group identity and producing a sound that is unique to the group, this album is perhaps above average, but not in the same upper echelon. All Things Go lacks a sense of unique identity that would propel Mixed Company to the greatness the group is fully capable of. The a cappella world is forever growing, and this Stanford crew needs to grow right along with it to remain in the conversation.

All Things Go streams on Spotify.