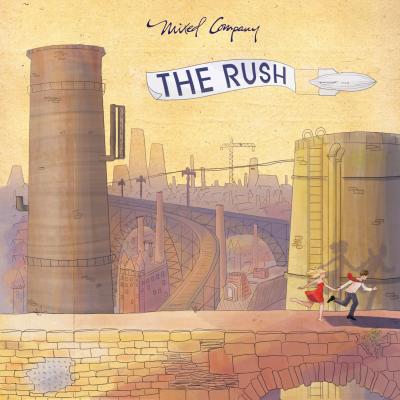 As excited as I was and as much praise as I heaped on Stanford Mixed Company's Yours Truly a few years ago, I approached The Rush with a comparable amount of apprehension. After all, Mixed Company was a once-fantastic group that had fallen off quite a bit between albums before and with the heights to which Yours Truly ascended, graduation rates meant a predictable, almost inevitable (except for a rare few groups) decline was in store.

How pleased I was then to discover that while The Rush is not the equal of its predecessor, it's still a solid effort and bodes well for the group's chances of establishing a tradition of superior quality with their studio recordings.

On the plus side, there are an unusual number of first-rate soloists to be heard here with just the right dose of energy, abandon, intensity, sultry, and swagger. Lauren Ottinger certainly goes for broke in the the opening track (even as the background block constantly threatens to swallow her) and Danny Gould follows her on Starlight with plenty of character and soul. And then there's Denielle Barcelona on Halo, a performance that is a close second to none and perhaps the only one I'd consider mentioning in the same sentence as Pitch Slapped/Delilah/Musae's Hannah Juliano. Yeah, it's that good.

There's also a refreshing amount of fundamentally sound and creative arranging heard here from which any number of groups across the country could learn a great deal. To be fair, wunderkind-for-hire (wunderman?) Tom Anderson sets the bar pretty high with The Edge of Glory. But especially in the intriguing and unusual intros (Black & Gold, Battlefield in particular) and in the variations between first and second verses and choruses, Mixed Company sets an example that I very much wish others would follow.

Indeed, it's hard to truly pinpoint how and why this album is in fact still a little lacking. It's best described as that certain extra "something" that prevents each element from moving beyond good, or quite good, to outright spectacular. The blend is lovely on the "ooh-ahh" power chords, but it lacks a certain cohesiveness in some of the rhythmic, syllabically intense passages. The energy is regularly there in the soloists, but the repetitiveness of songs like I'll Be and The Chain — while arguably "hypnotic" (if I'm being generous) — left me pretty bored for the last third or more of each song. I'll Be, as well as Black & Gold and The Voice Within, also prominently features a droning bass line, mixed far more forward than seemed necessary and sitting seemingly endlessly on and around the same note. Not a great recipe for for creating, building or preserving forward momentum. And yes, the creativity on the production end is there — thanks in large measure to the wizardry of Charlie Forkish — but as current as the repertoire is, as engaging as the intros are and as successful as the arrangements overall tend to be, there isn't an "oh wow" moment to be found where you marvel at someone's novel and ingenious approach to a stylistic or chordal challenge.

Basically, Mixed Company has done good and admirable work. It's not going to knock your socks off and keep you coming back for more, but it won't disappoint you either. Not a must-own, but a "likely to enjoy" if you choose to do so.

Mixed Company has come out with a darn good album here. It's not quite "exceptional", but definitely on the high end of "very good". The singers (mixed male/female) all blend together, have a very full sound, have no intonation issues, and employ no in-your-face auto-tuning. It's just nice music to listen to. Well done.

The stand-out songs for me are Starlight, The Chain, The Voice Within, and Halo. Beginning with Starlight: this is one of my two favorites on the album. Soloist Danny Gould is a joy to listen to. His falsetto is fantastic — and tastefully used. Even though the phrase "hold you in my arms" is used over and over again (with the "in" being in falsetto), it never gets old to listen to. Definitely should be in the running for a best male solo CARA. Interestingly enough, Danny also does the vp for the song, though presumably not at the same time.

The Chain and The Voice Within both have similar styles; they are among the more subdued songs on the album. The soloists (Sarah Jane Clark and Kafi Hemphill, respectively) both use a light, breathy style. Both songs also have terrific endings. The Chain breaks into a round for most of the last minute, and I found it really interesting to hear. And The Voice Within's continual decrescendo over the last 25 seconds with only harmonies and no words (although the soloist does pop back in) is a great way to close the album with a peaceful feeling, leaving the listener wanting more.

Halo is my pick for song of the album. I've heard several a cappella versions of this song, and this is one of the best. Denielle Barcelona displays an admirable range, effortlessly going from an F below middle C up to an F two octaves higher. Her voice also has an interesting texture to it, and like Danny Gould mentioned above, she should be in consideration for a best solo CARA. The other aspects of the song are also nice, from the tasteful vp to the nicely sung duet parts to the rise and fall of the dynamics as singers cut in and out. Definitely a song I would share with my non-a cappella-aware friends to let them know what this genre is about.

The songs that aren't quite as successful are generally because either the soloist wasn't quite as outstanding as the ones I've mentioned (but they were generally all still good), or because the arrangement didn't grab me. Some songs were a bit plodding/repetitious, some a bit too transcriptive of the original artist, and many just weren't very memorable. That would be my one piece of advice for the group: try to put a bit more of your own stamp on the songs you sing to make them more memorable. You clearly have a world of talent, and if you stretch yourself I'm confident your next album could be one people are talking about for years to come.

The most awesome thing about Stanford Mixed Company's The Rush is how unbelievably full the group's arrangements are. Song after song, soloists are supported by a rich and full set of backing voices, which add layered nuances to these songs without being distracting.

One of the highlights of the album is Soon We'll Be Found, which pulses in a way that gives the song a perfect momentum. There's a section in the bridge where the guys drop out and hearing just the women is a really powerful moment — kudos to group member Luke Henesy for such a great arrangement. Similarly, I love the rippling "I'll be there" murmurs in the background in I'll Be — it's a great way to give a new spin to a (perhaps overdone) old tune, and arranger Chris Lewis is to be commended for that.

The rest of the album is very good but not outstanding. Yes, these arrangements are full and rich, but sometimes there's not enough variation. Black & Gold sounds great, but I wish that there had been more changes (either dynamics or arrangement) throughout the song. The bridge of Battlefield is a little shaky, which is unfortunate since the rest of the song sizzles. And Wake Up is the album's unfortunate weak point; it just sounds muddled and chaotic. That effect worked fine on the Arcade Fire's original because their whole album had the same feel, but one song out of context here, on an otherwise polished pop album, just feels out of place.

Overall, The Rush is an enjoyable listen and is definitely a step up from their previous, Yours Truly. Mixed Company does a great job of commanding attention with layered arrangements that are complex without sounding busy or distracting — and that goes a long way to making this album both solid and interesting.

As I mentioned in my review of Yours Truly, it is greatly appreciated that the group acknowledges the songwriters of these albums by licensing through the Harry Fox Agency (with the exception of Wake Up).

To order a physical copy, please visit Mixed Company's online CD store. This album is also available for download on the iTunes Store.