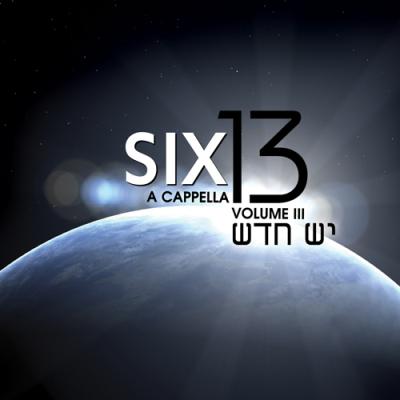 Yesh Chadash is a high-quality release, but it left me pining a bit for the Six13 of old. The catchy beats of songs like D'ror Yikra (featured on Sing IV) and Lecha Dodi are replaced with more standard 4/4 feels (with the exception of Im Eshkachech). The stunning chords of Carlebach's Cracow Nigun/Adir Hu are replaced with simpler, more predictable progressions, albeit with pleasant suspensions. The raw quality of Son and Home makes way for more of the sweet, sing-song quality of the '90s boy-band. True, this genre was always an influence on the music of Six13, but in the past, the aggressive rock edge of their leads transformed that influence, giving it the magnetic quality of groups like Green Day. This release doesn't quite bring that intensity and, though the result is still fine work, it's noticeably gentler.

The talented Mike Boxer continues to drive Six13's achievements. Not to diminish the notable contributions of other members, but as producer, recording engineer, composer of Ki L'olam Chasdo, Mi Chamocha, Modeh Ani, Im Eshkachech, and parody lyrics on "Circumcise" in Ne'ilah, performer of several leads, co-vocal percussionist and arranger for every track on the album, Mr. Boxer is clearly steering the ship. This isn't a new role for Boxer as his handiwork has been all over Six13's other releases as well, to great effect.

In the past, I've credited Six13 "consistently rich and creative arrangements" but Yesh Chadesh, though still far better than most, left me just slightly less enthused. Absent, as one would expect from such an accomplished musician, all the typical arranging mistakes. But fewer are the startlingly unexpected turns that made prior releases not only rock, but also keep my interest start to finish. (Exceptions, Ata Echad and B'ni do have some lovely surprise harmonies which were very enjoyable respites.)

Six13's highly original release universally delivers better constructed melodies than what's getting radio play today. That's not a small accomplishment in any environment, and it easily earns them a "5" for creativity in comparison to the world of a cappella. Their lyrics are typically excellent as well, most originating in Hebrew psalms or religious material.

Of note is Six13's foray into parody on Ne'ilah — a bunch of pop songs with Jewish joke lyrics. I don't want to give away any of the bits since they will likely only be genuinely funny to you once. They'll get a laugh, for sure, but after that, you'll probably skip the track in its entirety. Perhaps a more cohesive choice would have been to keep the jokes in the live material but off the album, possibly releasing them as bonus material on a website.

Despite the mixing contributions of aca-luminaries Ed Boyer, Bill Hare, John Clark and the less well-known (at least in the aca scene) Andrew Schwartz, I found the production just barely on par with earlier releases. I found the reverb frequently too wet, the vp snares old-fashioned, and the high frequencies occasionally distracting. On the plus side, the auto-tuning artifacts — those occasional and unintentional robot sounds from prior releases — are now completely gone and that's a nice improvement throughout.

Many groups never achieve what Six13 already has. But I long for a return of their classic sound or a step forward towards an exploration of new musical dimensions. Volume III, Yesh Chadash is undeniably very good, but this is a group whose discography commands one to expect greatness. However, given Boxer and Six13's past laurels, they may have earned a little rest from such intense expectations.

After listening to the first two albums by Six13 again, the first thing to notice about their third and latest recording Yesh Chadash is that the guys have completely developed and matured into their sound. There is a definitive boy-band, pop quality that serves the guys very well. The album is brimming with resonant bass lines, energetic backing vocals and amazing solo vocal talent.

The first half of the recording is upbeat and danceable. The second half leans more toward the slow-jam ballad genre. All of it is excellent. With something for everyone, Six13 has delivered a product that is as close to pure joy as one can imagine.

The best tune is the jazz-infused ballad Im Eshkachech. Featuring guest vocalist Michael Frieland, the song is reminiscent of Martin Sexton's Can't Stop Thinking About You as performed by Firedrill!. Mike Boxer has composed a magical opus of love and longing that sends chills down the spine. Boxer's muted trumpet ain't half bad either. All of the elements meld into the quintessential jazz-pop tune.

If I had to find fault with the album it would be the inclusion of an "intermission" from a radio DJ that throws off the track listing and an ill-fated, yet slightly amusing medley called Ne'ilah. The lyrical reworking of songs like Apologize, Crazy, Toxic and Umbrella seem more akin to something that The Lonely Planets would do on Saturday Night Live than what would be considered germane to a heavily religious album. I mean, is a bris something to laugh about? But then the guys went and added Toxic and the criticism flew out of the window. Man, I love that song.

The third time's a charm, as the old saying goes, and Six13 has proven that without a doubt.

Will Six13 ever hit its peak? The group sure doesn't on its third volume of work, climbing ever upward. You'll hear moving traditional music with lyrics taken from prayers, poems, and psalms, and twists on these mediums to create funky Jewish rock 'n' roll. You can't score more creativity points than Mike Boxer and crew have on Yesh Chadash. It takes an extremely skilled arranger and even better singers to pull off something this awesome.

Six13 is very detail-oriented. Most songs are loaded with, "Wow, that was cool... wait, that was cooler... whoa, that was the coolest yet!" moments. Yesh Chadash opens with a bang — praise song Ki L'olam Chasdo is uplifting, infectious, and brilliantly executed. Mah Tovu follows on the heels of Ki L'olam Chasdo and features incredible lead vocals from Alan Zeitlin. Modeh Ani is an open invitation to kick it. But the most creative piece is Ne'ilah, a parody of excessively popular hits (Apologize, Crazy, Toxic, and Umbrella) with Jewish humor. I won't give away all the punch lines, but just know that it's not "too late to apologize" — only "too late to circumcise".

Exceptions to sheer delight on Yesh Chadash center around the down-tempo songs (Mi Chamocha, Im Eshkachech, B'ni, L'dor Vador). While still difficult and interesting, there's a noticeable intensity drop, making for a less fulfilling listen when compared to the rockin' numbers. When you can wail as hard as these guys can, anything less is just not as satisfying. Work it out, bring it out, boom.

The music on Yesh Chadash is, frankly, totally amazing. I recommend this album enthusiastically!

To order this album, visit Sameach Distribution; the album is also available at Judaica stores and wherever Jewish music is sold.