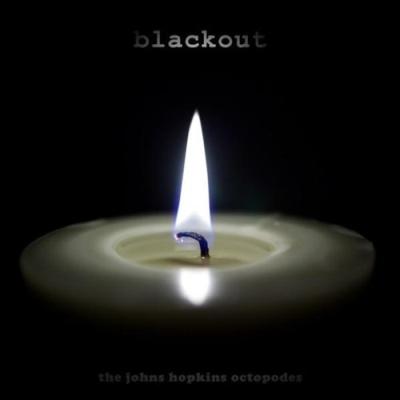 As it happens, I just saw the Octopodes host at Wooten A cappella Fest the night before beginning this review. Their first lead was noticeably chewing gum while both speaking to the audience and singing lead; it seemed more disinterest than swagger. It was as if the sign for the show read "Puppet Show" in bold letters with "Octopdes" in smaller font beneath, and the members were none too happy about it. However, in short order, the group did step up and deliver some good leads and solid VP, earning back cred with the crowd. Like many collegiate groups, their album Blackout bears only slight resemblance to their live sound. Blackout is considerably more polished, processed and effected.

The Johns Hopkins Octopodes (pronounced ahk-top-ah-dees, not octo-podes as one might imagine) have a penchant for distortion which seems to show up on most, if not all their tracks. Some purists (and others) will find it overbearing, but this strong, repeated choice serves the group well in establishing a signature sound that separates the Octopodes from many of the their collegiate peers. The Octopodes aim for aggressive, alternative and in-your-face, and they often achieve it, doing a cappella justice to artists like Incubus, Evanescence, and The Killers.

Though many elements of the production are well done, the mix displayed less effective choices on several occasions where the lead singers were lost in the background or awash in the reverb, or when the EQ left a very sharp spike in some grating frequencies.

Arranging leans heavily on production with several songs creating an exciting texture or effect, but then failing to go anywhere from there. Mercy On Me and Soar are likely to stand out for listeners for a stunning lead and powerful, effective textures, respectively.

The group's website proclaims their motto: "The Octopodes live and sing by the 4 D's: Diction, Dynamics, Derformance, and Dafterparty." Blackout is a good reflection of those values: some musicality and hard work, some bad-ass attitude, and, like the extra Ds, an indication that we shouldn't take it all too seriously.

I don't want to penalize the Johns Hopkins University Octopodes for making use of so many post-production tricks of the trade, as these have become as much a part of the collegiate a cappella scene as "zhin-zhin-zho" — syllables of which the Octopodes also regularly avail themselves.

Indeed, on Blackout, the Octopodes not only make use of gobs and gobs of effects, they employ a veritable all-star team of studio wizards — Bill Hare, Ed Boyer, Dave Sperandio, Tat Tong, James Cannon, James Gannon — to work the magic for them.

But when the most prominent and persistent feature of an album is effects and their application, something is amiss. And I'm sorry to say that Blackout is precisely such an album. If you like overpowering, sampled and superhumanly sequenced VP, bass lines that sound as if they've been octavized and then octavized again, and backgrounds that often get completely overwhelmed by the aforementioned combo of bass and VP, then by all means give it a whirl. But if you're looking for imaginative arranging, genuine energy, engaging arrangements and knock-your-socks-off soloists, you won't find much to make you happy here.

This reality was especially disappointing after reading the RARB reviews of the Octopodes last release from 2005, Shot Of Blue. Where is the smooth blend? The warmth and dynamism of the background block? The ingenious arrangements? Instead, the backgrounds are regularly a series of theme and variations on oooh/ahhh/doh/dooh block chords. Or worse, we get über-cheesy word backgrounds to start songs — something I thought (hoped?) had been retired shortly after the turn of the 21st century. Even when they do venture into a more complex texture, more often than not the result is a series of disparate harmonic lines that only occasionally coalesce into a cohesive background — and that's when one can hear them. To be fair, I'm sure there is more going on than what one can hear through the bass/VP drone, but even when it's audible, there's nothing here that borders on innovative — indeed, it's a bit of a stretch to even call it interesting.

But more than the somewhat simplistic and/or hyper-enhanced music-making, my single biggest issue with Blackout is the palpable lack of energy that pervades just about every track. "Plodding" is a word that pops up repeatedly in my listening notes, and that's never a good sign. Unfortunately, I can't really tell what the culprit is: perhaps the bass/VP is so dominant that it makes everything else pale in comparison? Perhaps the arrangements are just too vertical, with abbreviated syllable combinations that land too heavily on the downbeats? Perhaps it's a bottom-heavy sound that feels even more mired in a bass clef swamp with an absent soprano or two who can really wail? Or perhaps the group's singers were just so focused on singing the notes correctly that they lost that certain verve that elevates accurate singing to engaging entertainment?

Most likely, it's some combination of all of the above. But whatever it is, it's the thing that makes a very polished and slickly recorded album far less listenable than it should be, even with all of its shortcomings.

When I first heard the Octopodes through RARB, over five years ago now, I thought they were very cutting-edge. I loved their recorded sound and I loved their risky arrangements on Shot Of Blue. With Blackout, I think they're pretty much in the always-growing Generally Good Group pile now: not particularly memorable anymore, but definitely capable. Kind of a shame, but we're in the era where most groups have access to talented producers and mixers who can fix problems and add mechanical finesse (everyone you can think of worked on Blackout), and the Octopodes sound a lot like everyone else now. They're in tune. They're pretty energetic. They like edgy stuff. They've got a nice selection of hot diva female soloists. So there you go.

... almost. Like Shot Of Blue, there are a few tracks that just stay with you, that just relentlessly command your attention, even after successive listens. This particular arrangement and delivery of Zombie is infinitely effective, especially since the background is so deliriously, wonderfully busy, adding fuel for the awesome soloist (Popi Benisch) to burn. It's as addicting as any delicious thing you've ever come across and came back to over and over again. And even though you've probably heard one too many a cappella versions of Call Me When You're Sober, give this one a listen. It's hugely Rockstar. Should you want to feel totally vocally inferior, listen to Vanna Dela Cruz wail on Soar. I mean, whoa.

There's just a few weaker tracks on Blackout, and there's nothing really wrong with them. But let's be picky, because you've got to with the Generally Good Groups. Both the arrangement and production treatment need more thought on Home. This presentation sounds dry and static, when Marc Broussard's original is so well-received because of the power and evolution of the song. That vibe is attempted here but missed. Also, Fallen seems too sleepy for Blackout. It's definitely a mid-album lull.

Yet, chances are you'll find something to sing along to on Blackout. It's a very fine album. Here's hoping the Octopodes can crank out something even more very fine next time with their crazy mad skills, but shoot, this is still worthy.

To order this album digitally visit iTunes or Amazon. To order a physical copy, email the group.