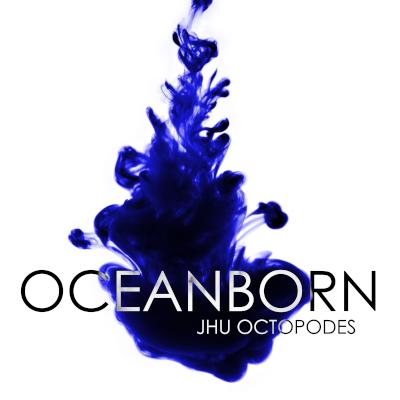 When last we heard a JHU Octopodes recording, it was The Kraken, an ambitious and intermittently impressive album of all-original a cappella, which earned the group the 2015 CARA for Best Mixed Collegiate Album, as well as several other nominations. With the 8-song EP Oceanborn, JHU is back (mostly) in the world of covers and the results are as slick and polished as ever — the group has long favored a heavily manipulated/produced sound — yet lacking some of the nuance and attention to detail that might have revealed more depth than just a surface shine.

To be clear, the "4"s and "5"s scored above are well-earned. Overall, everything presented here is solid, well-constructed contemporary a cappella and in some cases, it rises to the level of truly great. It's not by happenstance, however, that the "5"s fall as they do. Crash and Burn is the sole original song featured here and it's a silky, sultry delight. I do wish the vp was a bit less fussy with its endless subdivisions (more on that below) and the arrangement could have featured a bit more development or variation, but it's hard to quibble when the arranger is also the composer. Distance benefits tremendously from being one of the few songs that is given the chance to breathe a bit by the arranger Joseph Paek and the mixing team from The Vocal Company, and while I still could have done with less insistent vp, the rawer sound on this song goes a long way to making it stand out. And then there's the closer Lionheart ("ocean born" is a lyric early in the song), the arrangement for which comes from the always reliable Elliott von Wendt of Vocal Arranging. In truth, the original is more than a little strident for my tastes, but von Wendt gives the Octopodes an adaptation that is faithful without being slavish, and creative without being jarring. Here and there, it does sound a little more Lion King than Lovato, but it's heart-grabbingly performed and Nicole Abdo's go-for-broke solo is fantastic.

The final "5" on my scoresheet is the opener, and while it does merit the high score for its overall sound, infectious energy, and excellent performance, it also reveals some issues that become even greater problems as the album progresses. At least over the first half, the Octopodes favor original material that is anchored in profoundly specific feels and grooves. Unfortunately, whether it's in the arranging choices and style or the production or some combination of the two, the specificity of that feel and/or groove is glossed over or seemingly ignored, so that we get a more homogenized, generic dance-y/hip-hop sound instead. Focus / Bad Girls is simply too fast from the get-go, and the contrast of the verse and the sparser cowbell-infused groove of the chorus is nowhere to be found. Overall, Expensive is certainly enjoyable but it's been stripped of the stylistic choices that make the song especially fun, so we get smoothed over, generic R&B instead of the crisp, tightly rhythmic funk of the original. That same sort of tendency lessens the charms of Past Lives as well, giving us a more angsty, earnest, and theatrical interpretation and sound instead of the quintessentially '80s rhythm and feel that are so recognizable at the top of the song, and the laid-back, breezy, at times almost bubble-gum pop approach of the original solo.

Now there are one or two times where the original material and the artistic preferences of the group and/or the stylistic tendences of the team behind the console are seemingly very well-suited to one another. Such is the case with Privacy where the original is itself a heavily sampled, pitch-bended, manipulated sound and, given his facility with music of this sort, it was a wise choice in having Christopher Given Harrison (of ARORA fame) arrange. Unfortunately, songs on a cappella album that feel like they've been more "assembled" than sung often leave me cold. If the group could somehow pull off this tune live with some pedals and an Abelton rig, I might be more engaged and entertained, but as a recording, while capably rendered in every way, it just does't quite hold my attention.

At the end of the day, however, the scores speak for themselves. This is quality work and if you like the material being covered and/or some of it is new to you, and you're curious and/or you'd enjoy a terrific new original song, you could do a lot worse than to pick up this album. And no matter what I say, based on their extensive album history, the Octopodes aren't moving away from the electronic sheen and hyper-busy rhythms of the group's signature sound anytime soon. So be it. Their toolbox is a large and extensive one and their handiwork is always nifty. I just would like to see a little bit more craft and attention to detail behind the glossy presentation and polish.

Oceanborn is a very cleanly sung and produced album with no low points. However, you may not be affected by any clear high points until the last track, Lionheart, which is a huge, Olympics Closing Ceremony-style piece that will make you both appreciate the group's consistency while craving something more.

There's not much in the way of risk-taking here: the Octopodes stick with highly accessible fare sung by a seasoned ensemble, that's given a thorough studio buff and sheen with multiple producers from The Vocal Company, and thus gets the "Good" rating as a result. It's the collegiate norm these days, and keeps the ears pleased and the clients happy. The problem is, this could be given to RARB from the Octopodes or dozens of other groups and I'd respond the same because there's no marked identity here; it's anonymous without the Octopodes stamped on the cover. I felt a lot differently when I started reviewing this group in 2005, and very differently indeed with the group's previous release The Kraken, so it's a reminder that groups have to keep working ever-harder to stand out.

On to Oceanborn! The opener Focus / Bad Girls may lead an artist like Bruno Mars to cover the Octopodes' energetic arrangement, playing with hip-hop, jazz, rock and choral styles with both male and female leads. Crash and Burn is all soul with big swooping dynamics that push and pull the piece along and will make you involuntarily sway as you listen. Would have liked more natural pitch and blend here, though. We get more of the nice swoop-swoop dynamics with some splashes of much-needed organic sounds in the breathy "dat dat dat" passages of Distance. More organic sounds continue in the earnest opening choir of Past Lives; a better balance of machine and voice throughout each track would have added a little more depth to Oceanborn. Darling / Let It Go is the first time the leads really let their walls come down and aren't worried about hitting a flawless execution; could have been even more impactful without the copy-and-paste-sounding drum booming over the notes, especially in the high and glorious climax. The soloist for club-style Privacy sometimes gets lost in the background (this boundary is blurred a bit in other songs, too, like Distance). Lastly, we get to the very satisfying show pony Lionheart, which has a captivating atmosphere and explores the full range of dynamics, but it's also a professionally penned arrangement (one of two on Oceanborn).

So, my summation of Oceanborn: "This is good, but...". Give it a spin and see if you agree.

The Octopodes present a diverse and mature album with Oceanborn. This release features arrangements by group members Joseph Paek and Katrina Estep, with production work and additional arrangements provided by The Vocal Company.

Oceanborn begins with a clever mash-up of Focus and Bad Girls. The juxtaposition between this opening track and the one that follows, Crash and Burn, is alleviated by Isabel Evans' gentle delivery. Estep's straightforward arrangement of Expensive combined with her dynamic solo performance keeps the energy and interest moving forward following Crash and Burn. Distance, originally performed by Emily King, delivers a relaxed lead coupled with a sleek arrangement on a track that knows how to take its time.

Past Lives is a welcome change of character following the carefree nature of Distance. Josiah Yiu and Nicole Abdo's duet on Paek/Estep's mash-up of Darling / Let It Go both captures and fuses the lyrics of the originals in fresh, unexpected ways. Privacy features the incomparable arranging abilities of Christopher Given Harrison (ARORA) — and he does not disappoint. The arrangement is imaginitive, always leaving the listener guessing as to where Harrison will be taking us next. Oceanborn concludes with, arguably, the strongest track on the album — Lionheart. The lush, cinematic arrangement combined with the powerful and textured solo performance of Abdo is enough to give Demi Lovato a run for her money.

After reviewing the group's last two albums, I concluded that the Octopodes fit perfectly amongst some of my favorite a cappella albums; the same can be said of Oceanborn. If you haven't checked it out already, I highly recommend it!