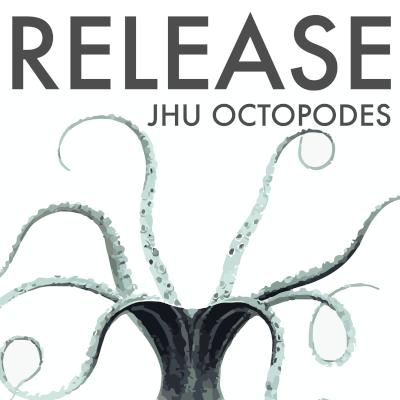 On the plus side, the Octopodes from John Hopkins University have taken a sizeable step forward with Release, their latest six-song digital-only ... er ... um ... release. On the worrisome side, it's hard not to atrribute a huge portion of this progress to the work of a single individual: Peter Yang. For the moment, though, let's not worry about the fact that Yang graduates in 2014 and focus instead on what makes his contributions most enjoyable (and sadly, what makes some of the other work less so by contrast).

"You never get a second chance to make a first impression" said the old Head & Shoulders commercial (adapting a quote attributed to Will Rogers) and the Octopodes make a great one with Kimbra's Come Into My Head, hands-down the best work on the album. Overall, it's just a terrificly infectious arrangement and performance. It could serve as a model track for other groups in two specific areas. 1) The arrangement creates texture and feel not via a droning quarter note or eighth note pattern with block chords piled on top, but rather as a series of rhythmic figures scattered among the voice parts, which only when combined coalesce into an overall groove. Rather than trying to have one voice part sing a signature lick or rhythm in an upbeat song, groups would do well to consider how to chop it up into smaller components and have multiple voice parts combine to "form" or "create" the rhythm. 2) Angela Ugolini and Dave Longo's mixing is spot-on appropriate. The component rhythmic patterns and other ornamentations have their share of applied effects, but it's always tastefully and artfully done. The placement of the rhythmic components within the mix add a second layer of movement to a song that is already brimming with energy. The song does run out of steam slightly at the end — which is as much in the composition as the execution here — but for the most part, it's a truly excellent marriage of arrangement, production, and performance.

Yang's work is also the "best of the rest" as well. Locked Out of Heaven feels a bit too much like an exercise in trying to realize the same song in too many different tempos and feels and as such, it becomes more of a series of musical ideas than a cohesive arrangement and performance. Still, it's wonderfully inventive and Yang's soaring tenor is quite impressive. Bound To You (yes, from the movie Burlesque) is a bit of the opposite — there's not all that much going on here except a showcase for the soloist, Nicole Abdo, who definitely has the upper belt to sing it, even if she's not quite as comfortable in the throaty, lower early part. Her vocal gymnastics are the main appeal here as the group seems to have left the dynamics at home and the whole thing gets pretty shrill and yell-y at the end. It's Time is somewhere in the middle; it's not a boring arrangement but it's also not all that interesting. The whole is greater than the sum of its parts on this one, and even with an over-reliance on thundering vp and solos that are mixed a bit too far back, it's an enjoyable listen.

Daylight and Shake It Out just aren't in the same league as the others. In addition to a pretty run-of-the-mill block chord + word echo arrangement, Shake It Out suffers from being programmed right after Bound To You. Another belty female solo, but this time much more pinched and piercing. Powerful, but not as pleasing. And Daylight? Well, it's just kinda there. A pleasant, sing-songy arrangement with too-sibilant percussion and very little development as the song progresses. On a full-length album, it might get a little more lost in the shuffle as "filler" but on a six-song EP, it's much more noticeable as being lesser work.

Yang has alread tried his hand at creating his own a cappella work in the Peter Hollens vein — see his cover of Katy Perry's Who Am I Living For?  — so no doubt we'll be hearing more from him. The Octopodes are lucky to have him, and one can only hope they will find a way to raise their game collectively so that the high-quality work on Release can be replicated on releases to come.

I used to love the way the Octopodes balanced their natural sound with synthetic enhancements (yes I'm still stuck in the past with my affection for Shot Of Blue). But Release is very Collegiate A Cappella Today, with heavy compression, thick gloss, and a radio-ready sound. It's what we're all used to now, but I won't soon forget the sound this group used to trumpet. I even remarked "My chief complaint is the production..." for the group's last release, Code Blue. This time around, while I still have issues with the production, I simply have no "chief complaints": the Octopodes brought the good stuff here.

For the definitive example of Collegiate A Cappella Today, simply start at the beginning. On every front, Come Into My Head could be the latest must-have pop star song. It's engineered to gelled perfection: the octaves are spread out with a thumpy bass as the anchor; the lead is so present, memorable, and varied in approach; and the digital embellishments hit you fast and hard. Britney Spears might cover the Octopodes' version, no kidding.

In the audio transition from yesteryear to today, the Octopodes still do a bang-up job, as always, of really filling up the vocal space with unique treats and flourishes and strongly musical singing. There's so much more to sink your teeth into on Locked Out of Heaven here than on the original, with a fresh beat to infuse a new feel. I love the plump chords and emo vibe (and even the spunky accent marks!) on Daylight, and the wonderful feel-good-forever presence bursting out of the radiant choir piece Shake It Out. And It's Time wraps it all up perfectly; what a playful arrangement, managing to feature so many big voices while still sounding amazingly cohesive and crisp. Want some talent? Here's some. Covers of It's Time are still rolling into RARB, but I can say with confidence that this one'll be hard to top.

Individually, every track is really something, fulfilling the promise of an EP which should strive for precisely this outcome. I still wonder what we'd hear if everyone had taken even a half-step backwards on the engineering front — especially on the ballad Bound To You, which loses humanity and immediacy with the machine-tweaked chords — but my personal preferences probably won't get in your way of the impressiveness presented on Release.

With mixing help from a cappella luminaries like James Cannon, David Longo, Nick Lyons, Tat Tong, and Angela Ugolini, the Octopodes offer a diverse and refreshing album with Release.

Come Into My Head perfectly sets the mood for the album with Ginny Rogers' saucy performance. Clever and intricate arranging work by Peter Yang shines through on Release, perfectly capturing the lyrics in new, unexpected ways (listen to the introduction of Locked Out of Heaven). The third track, Daylight, showcases the performance and arranging abilites of Ben Ackerman. It should be noted that regardless of the arranger or mixing engineer, every track has a unified sound; an outstanding accomplishment for any a cappella group.

Bound To You is a complete change of character following the upbeat nature of Locked Out of Heaven and Daylight, a welcome and necessary break from the glut of mid-tempo pop songs that surround it. Lajari Anne's arrangement of Shake It Out combined with the talented solo performance of Abigail Ryan is different enough while still staying true to the original. Release finishes with a hopeful version of Imagine Dragons' It's Time. Featuring every member of the group as soloists, this track ties the entire album together.

Release is just that, a release; an escape from the hundreds of average, collegiate albums. With Release, the Octopodes prove that they are a group to watch out for in the coming year. I recommend this album to everyone.