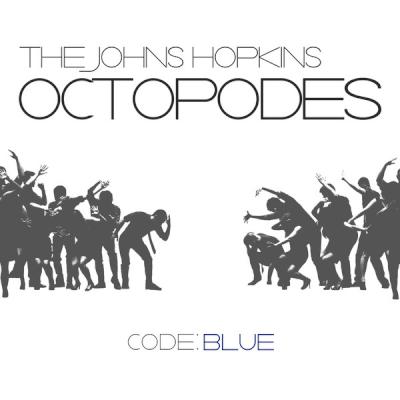 The Johns Hopkins Octopodes have some epic leads in Doug Ceci (Breakeven) and Diego Ardila (The Clock). They have a great composer in Ardila as well, someone with a truly original voice, someone whose album I would buy in a heartbeat. Most other Octopodes leads are pretty stellar in their own way, capturing the essence of the artists they cover (Cosmic Love, Uprising, Paparazzi, Bulletproof, to name a few), immediately reminding listeners of the most popular versions of their set list. That imitation might not be the most artistic or creative choice, but the group and its production team display admirable craftsmanship nonetheless as they present themselves with a slick, full, and commercially satisfying sound.

Code Blue is, in many ways, the new normal. The leads, as mentioned, are very good or excellent throughout — a combination of talent and excellent editing. The editing also makes the backing voices sound somewhat artificial in spots (which sounds synthy and awesome on Bulletproof, but not so cool on Uprising and Breakeven). But of course it's always dead in tune, a tradeoff many would agree with. The arrangements have a few interesting moments, but largely mimic the form and emotional arc of the cover songs. That often means predictability and a limited dynamic range. The identity of the group wanders through various Top 40 artists, leaning towards slightly more electronic studio effects than your average college group.

It sounds a bit like well done versions of things we've heard before. But there's more to the Octopodes than that. One impressive track that you haven't heard before is The Clock. Soaring lead vocals — an unexpected cross between Muse and A-ha — and ear worm originality in the melody make this one of Code Blue's standouts.

Doug Ceci also makes a lasting impression, leaving The Script in the dust with his textured, rangy, and powerfully emotional delivery on Breakeven.

On Code Blue, these singers are quite clear in their credit to their own composer, the talented Diego Ardila. Tragically, the composers of all other songs are completely ignored; the inappropriate OPB is substituted. I imagine Mr. Ardila would be unhappy to see his song credited merely to "OPB the Octopodes" in the future. The group would do well to brush up on the dos and don'ts of Liner Notes before its next release and to correct this album's serious omissions on its website. But on the bright side, the group does provide a lot of other credits, and Andrew Ma's artwork is both minimal and elegant.

Code Blue is a product that will wow fans and family. But RARB is charged with making a comparison to all other recorded a cappella. That places this album somewhere in the high side of middle, with a few truly memorable tracks.

The Octopodes from Johns Hopkins University is a talented group of singers with many of the qualities integral to a first-rate a cappella group. With its latest release Code Blue, however, those integral traits never quite integrate properly and the result is a scattershot release whose whole is less than the sum of its parts.

It may feel a bit odd to start with the production but the work of Liquid 5th is so ever-present on this album that it almost dominates everything else. The blend is pure but with a metallic sheen that never lets you forget how tuned and processed seemingly almost everything is. And in case you might forget, the sampling in the vp — sometimes yielding almost super-human rhythms — and the usual litany of distortion, flange, and other effects never lets you forget that the folks behind the console are at least as important to this effort as the folks in front of the mic. That's not an across-the-board criticism as it serves certain songs like Reckless Abandonment and Bulletproof quite well. But when it's inescapable, regardless of the feel of a given track, it becomes overkill.

The arranging front is perhaps the group's weakest area, with even the best work — likely Cosmic Love — never coalescing into a cohesive arrangement, but rather a collection of disparate melodic and rhythmic elements. At least that opening track has a certain sophistication and a bit of interplay between the different background parts, however. Far more often we get basic block chord pads, a homophonous rhythm part, and bass plus solo all set against a set-it-and-forget-it sampled and looped vp line. Yawn. And perhaps most disturbingly, it has an almost 1996-esque obsession exposed, with awkward syllables that are not just distracting but downright detracting from the overall impact of the material.

As for the singing, it's lovely for the most part, if a bit milquetoast for some of the repertoire choices. Lady Gaga and Katy Perry covers are in pretty good hands, and Diego Ardila is to be commended for both his composing and soloing on his original The Clock. The grit of Marc Broussard (Lonely Night In Georgia) and the edge of Muse is nowhere to be found, though, and by contrast, Breakeven (whose soloist sings "I'm falling toop eeses" for the first half of the song) and Bulletproof are a bit too strident and emotive for my tastes.

This is the first I've heard from the Octopodes, yet I know others who have worked with them quite recently and had very positive things to say. I'm hoping, then, that with the group's next foray into the studio, we'll get not just a hodgepodge of isolated flashes of brilliance, but a more consistent effort with a bit more sophistication and nuance. They have what it takes to be future all-stars, but for now, they're still in the minor leagues.

Music from the Octopodes helped shape my 20s, so I'm always pretty perky about getting another release from this compelling group. Expectations: an edgy track list, crazy-good leads (found most especially with Doug Ceci on Breakeven — just outrageous), demanding arrangements that certainly caused sore throats, lots of eerie dissonance and darkness, production that focuses on creating extra drama and power within the intricate vocal madness, and a whole lotta loud. My expectations were nearly met with Code Blue.

My chief complaint is the production, most especially the vocal percussion, which too often sounds like it's simply here to keep time in the background. This is a big missed opportunity for a group that focuses on mood music. Add more rawness and originality to the vp and a more intertwined relationship with a less mechanical bass, and we'd have a real face melt scenario here. Yes, I hear how the punk/hard rock songs have focused on crafting the lower-end and beats (especially Reckless Abandonment), but we need ever-more attention to the bottom and rhythm to be equal to the hot vocals above. Even on the ballads, maybe especially on the ballads. Be perfect, darn it, I want it all — I want everything equally unique and balanced. This is what happens when your music has been so important to so many: fans get demanding. Listen to the musicality of the first 48 seconds of Firework/Starlight — insane! Darn good singers workin' a darn good arrangement by Ceci. Then listen to how the impact all immediately lessens when that standard drum is just plopped in. But then the drum abruptly kicks out at 2:08, and holy moly, it's amazing again! Seemingly little thought was given to the performance aspect of the drumming on Code Blue.

But getting back to the great aspects, Cosmic Love is as perfect and gripping as any a cappella track can be, though we've gotta give half the credit to Florence + The Machine for the killer source material. And Therapy feels perfect to me, because it's just warm, happy-slappy throwback-sounding a cappella with a bopping soprano line that's an instant pick-me-up: refreshing in the middle of all this intensity, you know? And yes, loud cheers and hurrahs to Diego Ardila for his original composition The Clock, which comes across as professional, balanced, danceable, creative, and real. On Code Blue, these three works are my ideal Octopodes trifecta — the ones I'll hold onto to help shape my 30s.

Code Blue is certainly a worthy, strong release, even if the production is sometimes polarizing. See how it all strikes your fancy.

Code Blue is available on Amazon, iTunes, and Spotify.