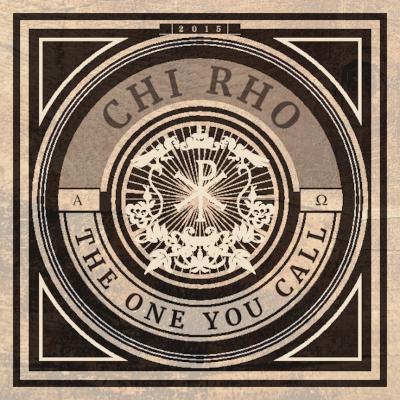 Admittedly, my familiarity with Christian pop/rock is very limited, so before pressing "play" on Chi Rho's The One You Call (no, not Ghostbusters), I was filled with a mix of apprehension, curiousity, and admiration.

The apprehension was minor and came in tandem with the curiosity, simply borne of this ex-yeshiva boy not knowing what to really expect from artists like Needtobreathe, Jimmy Needham, Phil Wickham, et al. But that's no big deal — at RARB, we hear music from unfamilar artists all the time and oftentimes are pleasantly surprised to be exposed to new and fresh voices (literally).

The admiration was an extension of the talent assembled by Chi Rho on the tech side: mutliple arrangements by one of my personal faves, Tom Anderson, as well as two by another fave, Rob Dietz; mixing duties shared by top talent (Ed Boyer, Bill Hare, and Danny Ozment); and mastering by Dave Sperandio. "Barring something unusual, this album should sound amazing," I thought.

And in truth, the work does "sound" excellent, if sound in that sentence is defined strictly by the more technical elements of sound quality, editing, sampling, mixing, and mastering. But to the extent "sound" is ultimately meant to create excitement, enjoyment, and satisfaction, I'm afraid Chi Rho's noble effort falls a bit short.

That these gentlemen are committed to the music they make and the themes it expresses is unquestionable. In a collegiate a cappella world that may often favor the "flavor of the month" in its choice of material to cover, their committment is laudable. And the depth of feeling both in the music and the liner notes is both palpable and admirable.

But ultimately, for my ears at least, this isn't terribly interesting music — melodically, structurally, and in some cases, lyrically. Perhaps it's unavoidable and/or perhaps it's by design — this is music with a message, after all. But with a few rare exceptions, it's formulaic and simplistic, and so it becomes repetitive and less interesting moving through the track list. Indeed, it's quite telling that there is a sameness to the approach of the arrangements, even when rendered by different people. A generally plain opening verse, chorus with a block chord approach (with or without vp supplemented by foot stomps and hand claps), a slightly more expanded/layered second verse, a stripped-down bridge (if there is one, or if not; it typically starts with the first of the repeated choruses at the end), that then builds back up to a few more repeated choruses, often coupled with group choral harmonies or word echoes and little else (besides bass and vp). It seems this is true to the nature of the original source material in most cases, but that's why I note that the material covered here just isn't all that engaging other than from a theological perspective.

Know that I take no joy in raining on Chi Rho's parade, as their aim is true, what they do is still relatively rare in collegiate a cappella circles (and should be encouraged), and the end result is absolutely a pleasant listen. But unless you know the material, like the sub-genre in general, or relate on religious level, I don't imagine this is an album you should feel compelled to call on.

The One You Call is a religious album from Chi Rho, an
a cappella group from Wake Forest with a Christian mission.

Nearly all of the songs on the album are spiritual, but there are a few exceptions. Hidden Away is, as far as I can tell, just a romantic ballad, and Marchin On is more motivational than inspirational. Most of the album is more what you'd expect from this type of album, though, with lyrics such as these from If You Can Hear Me:

And from Heaven Song:

The music itself is very good, so if you enjoy inspirational music like this in a contemporary pop-rock style, this would be a good album to pick up.

The album is actually more rock than pop, with the harsh vocal percussion at times detracting from the overall message. Seven of the eleven tracks employ vp, and four do not. After I had listened to the album several times and had decided on my track ratings, I realized that the three songs I rated as "Excellent" were all of the non-vp variety. That's where Chi Rho shines most, when the group's smooth singing can come through and the dynamics go beyond just "loud". For that matter, I also realized that one of my favorite sections in a "with vocal percussion" track is a bass riff in Brother, when the vp (and most of the other parts) cut out for the last twenty seconds to let the bass shine.

On to the three highlights. I've already quoted some of the lyrics of Heaven Song above. It's beautiful, both musically and lyrically, and has some of the best use of dynamics on the album. It's fairly soft for the first minute and a half. Then it starts gradually building for the next minute until it hits the "can't wait to join the angels and sing" line mentioned above, after which it softens into the repeat where "my heaven song" is added very reverently and reflectively. Quite effective.

Run To You is a cover of a Pentatonix original, but actually, I like Chi Rho's arrangement more than Pentatonix's! The group begins with just a single voice, which is then joined by another, then by another. By forty-five seconds in we've got four-part harmony on "I'll run, I'll run, I'll run to you" which has a simultaneously pleading and promising feel to it. The highlight of the song is the chord at the end of the bridge where an F major 11th chord (or possibly a C major 7th sus 4 in first inversion, depending on what you want to call it) resolves to an F major 9th chord on "set me free". Simply beautiful, and not something you normally hear in collegiate a cappella.

Hidden Away is a cover of a Josh Groban song, and the soloist, the best one on the album, does an admirable job of maintaining a pure tone while adding just a touch of vibrato. The textures in this one are what grab your attention, alternating between block chords, arpeggios, and other rhythmic accents.

All told, there's enough good things going on to make The One You Call a nice album to have, particularly for fans of Christian a cappella, but not quite enough to make it a must-have.

I wish every group delivered the performance Chi Rho does when they go into the studio. The men from Wake Forest University have discovered the perfect equation on how to furnish unrelenting conviction when producing an album. The One You Call is the group's latest release after the superb 2013 album The Life I Owe. Similar to the predecessor, Chi Rho gets a lot right in song selection, arrangements, and the ability to move the listener.

I hope other groups are taking notes from Chi Rho. When it comes to arrangements and production, these guys knock it out of the park. (The list of arrangers does include some fairly prominent all-stars.) What I enjoy most about these arrangements is the focus on grabbing the listener's attention. So many times groups are simply vying for how complex their songs can be, when really, it comes down to this: can you make your work an enjoyable experience? For the most part, the background on these arrangements are just as active and stellar as the leads.

Along with this praise, production is immaculate. Songs are clean, polished, and when looking at the big picture, some are ready for radio play. That should be a goal for all albums.

Now, on to the other good stuff. I won't keep you in suspense, Phoenix Burn is my favorite track! The song has a strong Christian-Rock vibe with a message of moving forward through difficult times. What Chi Rho brings to the table is an arrangement that allows the listener to be encapsulated by both the backing and lead vocals, and join in on the musical journey along the way. The song is powerful, and you easily feel it.

Marchin On is a great closer for the album. Much of the album simply pulsates with passionate energy, and this one brings the entire project home. The group's balance is the real MVP here, as it would be easy for the lead to be overwhelmed by the intensity through the song's duration, but it never happens.

What's also amazing about The One You Call is that it embodies a journey. The liner notes express the album is one characterized by "a reliance on brotherhood in Christ." Everything in between Phoenix Burn and Marchin On represents this characteristic. From the opening track Brother, that's uplifting and a bit groovy by the end, to the more somber Heaven Song which moves the listener with its reflective feel even during moments of sparseness in vocals, this album has so much to offer.

Little things, such as the decision to include Run To You without offering much variance from the original, and a few moments of dynamic stagnation, do hinder the overall project. But not by very much.

If you're looking for a project that's spirited, fun to listen to, and has some truly killer vocals, The One You Call will provide just that.