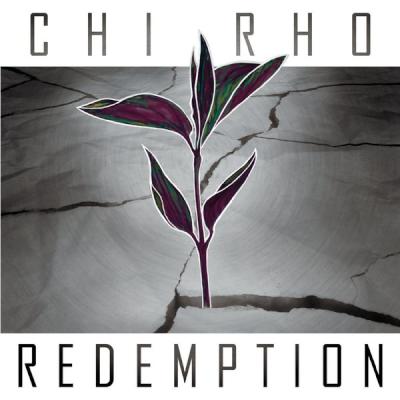 The word "redemption" is generally used when one has noticed a needed change from past foibles, feeling like they are on the road to succeeding by turning a new path. So, it is a bit confusing to look at the grand scheme of Wake Forest University's Christian a cappella group Chi Rho while trying to understand what they are being redeemed from. In the liner notes, the guys mention that they want to share their collective experience towards salvation, which makes the album extremely personable to them. And that is fine; it is just a bit jarring of a title for me from an outsider perspective. Unwittingly, the name casts a pallor over the group's previous album, This Restless Maze — which I really liked — suggesting that it is an inferior product (either artistically or spiritually) from which the group had to recover. I know that's a lot of overthinking on my part, but that's what reviewers do sometimes.

Redemption is broken into five thematic sections titled: "Brokenness/Sin", "Desperation", "Recognition", "Redemption", and finally, "What Now?", which is supposed to create a story arc for the album. And the songs were specifically chosen for this album and sequenced in such a way to propel the thought. Some of it works, but a lot of it doesn't. And the major reason is that the songs don't match. There are glaring discrepancies in both execution and production among the eleven songs which makes it hard to listen to this album as one piece of art.

Based on the class dates, it seems like it is just one iteration of Chi Rho, so it is baffling why there isn't more consistency of musicianship from track to track. The opening two tracks are the most egregious. State I'm In gives you full throttle male collegiate glee on the off days, like just teetering on this side of parody. And then you are completely discombobulated with the next track (and best on the album) Bone + Tissue, which is this electronica urban bop that is downright sexy at times. Yeah, I said it and it looks odd to me as well, but that's the truth. I know there are a multitude of arrangers on the album but other than Isaiah Carter, all of the rest have arranged for the group in the recent past, so they should understand the capabilities of the group. But alas. The album even peters out at the end, finishing on a very standard version of It Is Well that does nothing as a bit of music or as an album closer. It's pretty...

After a number of thorough listens for reviewing purposes, I stuck with a few of the tracks (Bone + Tissue and Deep Water) and unclicked the rest of the album from my playlist. I believe that if you pick up this recording, you'll do the same.

I can't really recommend this album to anyone who isn't already a fan of the group. It's a pretty rough listen when compared to all of the other a cappella music available at your fingertips. Bone + Tissue is an anomaly on an otherwise mediocre album.

Chi Rho from Wake Forest University has set a high standard for a cappella offerings that have a focus on spiritual selections. In terms of the group's more recent albums, each has been vocally animated and ripe with passion and soul. The latest album, Redemption, offers a slight divergence from previous works, bringing a more modern flair to the group's sound, all while simultaneously including nonsecular material that still stays close to home.

It's important to note that while the project's song selection is slightly different, the group's motivation is unwavering. In the liner notes of Redemption, Chi Rho includes a message about how all of the songs create a certain story arc that follows shared experiences on redemption. It's an endearing message that is truly felt as you listen to the tracks featured.

While Redemption offers a range of unexpected and refreshing works, it also manages to remain true to its bread and butter. Chi Rho has a way of making Christian and gospel songs sound so majestic and mighty. Tracks such as Hallelujah, What a Savior and State I'm In make a statement with their robust sound, ringing chords, and impressive dynamics. The former is a bit more traditional, putting forth a well-developed, warm and controlled sound, while the latter is incredibly energetic with nonstop buildups from beginning to end. Trust me when I say that you won't be disappointed with these tracks.

But it's the album's unexpected elements that really hook me. And it starts with Bone + Tissue. The modern RnB vibe that Chi Rho creates with this track is staggering with its simple yet impactful groove and slick harmonies. Pair this with some masterful studio production and it's impossible not to jam along with the guys.

From here, the group dishes out a bevy of amazing tracks that mostly lie in the realm of folk or alternative. True Sadness feels like a fusion of multiple genres with its reflective demeanor, vibrant percussion and all around striking lead and backing harmonies. There are some really gorgeous moments that will captivate anyone who listens.

The group's spirited performance on Deep Water is commendable. There's a certain cohesion in how each vocal part feeds off one another that just lifts your spirits. And the arrangement generates a delightful fusion of folk, indie, and country elements showing furthermore why this all just feels different.

What makes Redemption great is not only its song selections, but also its inspired singing. While the arrangements on tracks such as Born Again and It Is Well aren't my favorite, the singing is so top-notch with the group's near impeccable balance and blend that it just works to elevate the track. The group's singing absolutely rejuvenates the soul!

Chi Rho shows that groups can stay true to who they are while putting forth refreshing and new concepts that still have real impact. I hope the group continues branching out with future projects because this one definitely paid off.

The good thing about receiving an album from Chi Rho is the guaranteed quenching of a cappella thirst. Either through the choral style arrangements or through the punchy vocal percussion, the group seems to satiate one's ears for a cappella harmonies — it may be because the arrangements are a brainchild of great arrangers, or maybe the group just sings it all this good. Based on my personal experience, arrangements are nothing without great voices interpreting a good creative work.

After reading the liner notes, my entire listening experience changed. If you're one of those people who pay attention to lyrics, this album is for you. I, however, have to put in extra effort to listen to the words above anything else because I usually enjoy a cappella music by chord progression, not by the song's lyrics. It's a great experience to understand the lyrical content of the whole album; like telling a story as if watching the whole first season of a TV series.

Diving into the album's tracks, I have no complaints listening to these on repeat, so I'm just going to mention a few track highlights. State I'm In starts the release, setting the story straight as to what the album is about: knowing one's state, thereby needing redemption. Here, I really enjoy the block chord harmonies and the sincerity in soloist Vincent Melara's vocal performance.

Next, Matt Crawford is able to pull off a good head voice in Bone + Tissue without sounding like a singing chipmunk. True Sadness becomes an easy pick for a favorite track on the album. Then an original by Chi Rho's member Spencer Giglio comes into the picture — also made it to my favorites. This time, it's a simple choral style arrangement containing the plead for redemption ending in a dominant chord waiting to be resolved. The redemption part of the story takes place in Stick & Stones, Yet, and Born Again. Fast forward to Hallelujah, What a Savior, which reminds me again that I'm a big sucker for choral a cappella and this track doesn't tire me even if I listen to it all day long. The smart mashup with the Hallelujah song is genius. Deep Water, Psalm 42, and It Is Well concludes the story with a much brighter mood.

There is nothing that I could emphasize more than for listeners to actually hear Redemption as a tapestry of a big story, and that in the end, It Is Well. It may come off cheesy for some, but I think Chi Rho hits the right spots and earns the utmost respect for the musicians and creative minds who came up with this idea.