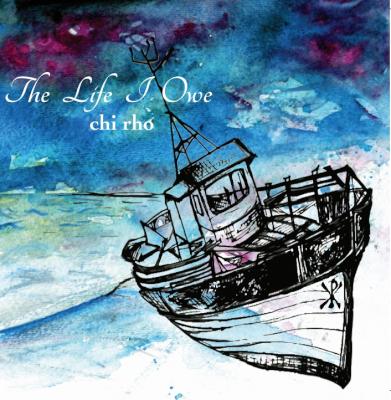 There's just something about sacred vocal music, isn't there? Vocal music and Christianity have a relationship that dates back to the Middle Ages, and there's no sign of Christianity's influence disappearing from the world of a cappella anytime soon. Chi Rho is a Christian a cappella group based out of Wake Forest University in Winston-Salem, North Carolina, and as a group they blend classic vocal chorales, gospel, and modern pop and rock to convey their message. It works fantastically; The Life I Owe is one of the deepest and most moving a cappella albums I've heard in a long time.

The album is produced and tracked by the talented duo of Derek West and Brad Stephenson (with production assistance by Connor Chick), who have quickly been making a name for themselves as talented and focused producers of vocal music. The albums I've reviewed by the pair have always been well-constructed; it's clear that they put a lot of work into making their albums albums, rather than just a collection of unrelated songs. With additional mixing by the legendary Bill Hare, it's no surprise that the album sounds terrific.

Chi Rho, as a group, is pretty darn good. Sure, there are moments where its blend falls short or the backgrounds don't seem completely locked, but Chi Rho makes up for this with solid energy and total commitment to their songs. The real standout element of Chi Rho, though, is its fantastic soloists. Every song, across the board, features a perfectly chosen soloist who gives it 100%.

People of faith should rejoice at The Life I Owe's quality, but there's something for everyone on this album. The Life I Owe is musical, gorgeous, and heart-wrenching in equal measures. I strongly recommend it to anyone who's looking for some more beautiful vocal music in their life.

Let me start off by stating that I wish there were more Christian a cappella groups! Wake Forest's Chi Rho proves that when there is a sincere, passion-driven purpose behind your music, it hits so much harder. In the case of The Life I Owe, the following word is well-warranted: WOW! The title The Life I Owe is aptly named. The singing comes across as if these men are truly singing for some purpose greater than the simple joy of singing.

Moving on, the blend of the backing vocals as well as the album's mixing in general is stellar. Collectively, the group's sound is top-notch. From the opening track Something to Believe In to the closing number Finally Home, each track is well-crafted and well-produced — a rarity in collegiate cappella. I will go on record saying this is one of the first groups I have heard to finally conquer the dynamic dilemma that plagues so many. It is one thing to have steady energy build and decline in a single song or two; it is another thing to consistently accomplish this over an entire recording.

Chi Rho capitalizes so well on its ability to have an exceptionally good soulful and gospel sound. Washed by the Water is delivered amazingly well and the intensity is heavily helped by the stomp/clap effects. Forgiven and Loved is reminiscent of Sunday morning church in the south; the backing parts are great and well-thought out and the soloist has a great deal of soul in his singing. Beautiful You was an excellent addition simply for the fact that it feels more like a pop song and is such a change of pace from everything else on the album; it has a dynamic build, a groove element, and remains true to the message the group is conveying.

It is worth mentioning that there is not a bad soloist in the bunch. The range of the group's talents (in relation to soloists) seem to fall between better than average and exceptionally convincing soulster. Whether the track is originally by The Fray, Phillip Phillips, or Gaither Vocal Band, the group has a lead that can hold his own.

This Christian a cappella ensemble can deliver a song in such a way that you forget that most of their selections have religious connotations, which is an impressive feat. Finally Home comes to mind in this case, as a steady driving rhythm creates an air of serenity. And many of the arrangements are not overtly complex; rather they are well-executed, as is the case with Home.

Lastly, I cannot forget to mention how put-together the album book and liner notes are; I enjoy the design.

The Life I Owe is a must-have and is easily one of the better albums to come out this year in the a cappella community.

The Life I Owe is the latest release by Chi Rho, a Christian a cappella group from Wake Forest. I must say, this album surprised me. The message of faith doesn't supersede the focus on musical excellence, it powers it. The recording quality is top-notch. The mix is perfectly balanced. I wouldn't call the arrangements innovative, but they are intricate and simple in all the right places.

Repetition is a problem at times. "Jn ja" has gotten a bad rap in collegiate a cappella, and deservedly so. The problem doesn't stem from these being bad syllables, but rather from their misuse. It's best to use syllables strategically to serve the music, not for the sake of using different syllables or merely to make it all more fun to sing. But Chi Rho doesn't fall into this trap; their syllable use is sensitive and appropriate. What they lack is creative arrangements, and use of actual words as background parts. This is where the repetition could be fixed.

Something to Believe In opens strong. It makes a promise of a Christian rock album, and for the most part, they deliver. It's one of the best arrangements of the album.

Beautiful You has a great build from a simple beginning. The solo is a particular stand-out.

Washed by the Water uses background lyrics beautifully. This soulful tune is well-served by a soulful solo with just a touch of rasp.

Home is a well-done cover that becomes repetitive.

Keep Your Eyes Open could have made a fine first track if the arrangement was more dynamic. Mad props to the studio for making the drum roll effect work so well.

Forgiven and Loved is just simple enough and features some great crunchy chords. One of the best tracks by far.

Heartbeat is a nice country rock song that fits well in the track list. The solo is a bit light and doesn't carry the song the way it needs to, but it's still good.

While We Sing isn't the strongest track. It's like listening to a musical theatre singer try a pop song. The arrangement starts weak, but improves.

O Love That Will Not Let Me Go doesn't fit the established soundscape. It's very well-done and has some great chords, but it belongs on a different type of album.

Carry Me Through has a retro, street corner vibe that is fun and refreshing.

Finally, Home isn't the strongest closer as it's fairly repetitive, but it has exquisite harmonies and a fantastic bell-tone effect.

The Life I Owe is a wonderful album filled with heartfelt performances and no small amount of talent. Some of these tracks may very well find their way into regular rotation on my playlist. Great job Chi Rho!

In addition to CD Baby and iTunes, The Life I Owe is also available through Amazon.