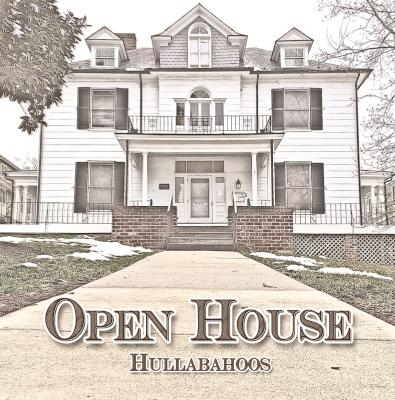 The Hullabahoos, founded in 1987, have settled comfortably into collegiate a cappella group middle age, consistently proving themselves talented and capable of producing quality recordings. Open House is a perfect example, an album which is inviting (pun intended!) and very easy on the ears. The song choices fall consistently into the group's comfort zone, generally hovering at or around the edges of contemporary pop and pop-ish music. This produces an overall cohesive feeling that the songs were all cut from the same cloth regardless of stylistic differences between original artists like Avicii and The Neighbourhood, for example. I'd love to hear the group stray a little farther into creative territory, either with original songs or somewhat more inventive arrangements, but it's awfully hard to quibble with the overall product here.

The single word which comes to mind most often while listening to Open House is atmosphere, and that is a tribute to mixing engineer James Gammon. The album sounds gorgeous, and Gammon is particularly effective with thick lush textures like those in I Won't Give Up. Oh, and chewy, crunchy textures like those in Sweater Weather and Rewind. Oops, can't forget broad, airy fare like If I Knew or Wake Me Up. I guess we can leave it at this: Gammon makes all of this music sound amazing.

Terrific production cannot save awful charts or performances. Luckily, the Hullabahoos offer neither here. The arranging team of Sean McDonald, Jake Mainwaring, and Richard Lee has a firm grasp on textures, and very little of the music sounds hollow or strained. Again, I'd love to hear them experiment a bit more in taking some of these songs away from a rigid devotion to the original, but that's only because I believe they are capable of elevating their game from great to truly memorable. Quibbling, I know. The Hullabahoos are also doing a Hullabajob (they seem to enjoy puns on the name) with the singing here. There's a very palpable energy to the singing, and that helps them engage the listener across the variety of stylistic choices. I don't get the sense that the guys are particularly invested or connected to the material they are singing, but the Hullabahoos still do a nice job of selling it. Solos are often very good, occasionally great. Standouts include Paul Ruess on Sweater Weather, Charlie Miller on I Won't Give Up, and Alex Spears on Rewind.

Given the arranging, performing, and producing talent bubbling beneath the surface here, we can hope the Hullabahoos find some new ways to connect to their music and innovate the next time around. For now, we'll have to be satisfied with a collection of above-average covers, produced with style, ambiance, and great verve.

Open House by the Hullabahoos features brilliant, in-your-face arrangements and raw, powerful soloists. With covers of The Neighbourhood, Jason Mraz, Bruno Mars, Maroon 5, and Rascal Flatts among others, the Hullabahoos present their latest album with boundless amounts of energy. The production work by James Gammon is forward and refined, lending itself to some absolutely awesome studio enhancements. Attention to detail, creative arrangements, and effortless deliveries make Open House a well-rounded, fantastic release.

The album begins with brilliant and powerful arrangements of Love Me Again and Sweater Weather that are different enough while still staying true to the original songs; the latter of which has earned the Hullabahoos a spot on the 2015 Best Of College A Cappella compilation album. The juxtaposition between these first two tracks and the track that follows, Jason Mraz's I Won't Give Up, is easily welcomed with the luscious interpretation of this 2013 favorite.

The Hullabahoos' adaption of Rascal Flatts' Rewind is powerful and textured, and filled with emotional intensity. One More Night allows the Hullabahoos to cut loose and play with some creative syllable choices — making the track their own. A thoughtful, though rushed medley of Earth, Wind & Fire helps to keep the interest moving forward through the second half of the album.

The arrangement, Gammon's production, and the talented voices of the Hullabahoos combined with the soloist make All of Me one of the most emotional tracks on the album. Then, Open House finishes with energetic versions of Feel Again and Wake Me Up that tie the entire album together.

Open House fits perfectly amongst some of my favorite collegiate a cappella albums! If you haven't checked it out already, I highly suggest purchasing this release.

What's funny about the Hullabahoos' latest entry is that there really isn't anything to knock on regarding the mechanics. The Hullabahoos are quite obviously a well-polished machine by the sound of the well-blended timbres and sonically tight arrangements. Instead, what prevents Open House from entering the realm of a "5" in this case is the lack of taking true agency of the album. Despite the inviting title, Open House feels more like another lesson in execution than a real exposé of what sets the Hullabahoos apart as a group. That being said, Open House is by no means a flop and has just enough dazzle and angsty pop vibes to keep fans satisfied.

One of the things the Hullabahoos seem to have polished well is the establishment of a remarkably well-blended sound. I Won't Give Up is a perfect example of a song that is likely a "must cover" song for most pop-oriented groups that's been made fresh again thanks to emphasized group vocal dynamics. The slower ballad-like songs like this have tendencies to drag, fall flat, and ultimately lack luster, but by giving the song direction and growth (like volume, and progressively accented vowels), they keep the listener consistently engaged to the end.

I have to give the Hullabahoos an "A+" for EWF Medley (Earth, Wind & Fire). It's a well-executed arrangement with solid albeit predictable selections from the group's legendary catalogue. There's a great comprehension of the funk groove, overall vibe, and a clever use of effects to recreate signature moments in the songs like the robotic vocals in the intro to Let's Groove.

Something that stands out to me about the Hullabahoos vocally is that, for the most part, a lot of the voices singing solo parts sound primarily of the same timbre and tonal quality. While there are arguable advantages to this, such as greater ease in achieving a natural blend and the establishment of continuity in the "lead voice" of the album, I would have liked to hear a bit more of a spread of voice types for more varied interpretations of these songs, and to showcase the depth found amongst the Hullabahoos. While matching songs pitch for pitch, tone for tone, and riff for riff can make for great entertainment, it's worth mentioning that new experiences can be created when things are switched up a bit. If a song is typically sung soft and clean, tinker with what happens when you get tough and gritty instead.

When it comes down to it, Open House delivers much in the way of entertainment. While there's not a ton of landmark moments to set it apart from the pack, there's no denying that it's still good a cappella. Some highlights to check out include If I Knew, Rewind, and EWF Medley.

Physical CDs are available at www.hullabahoos.com.