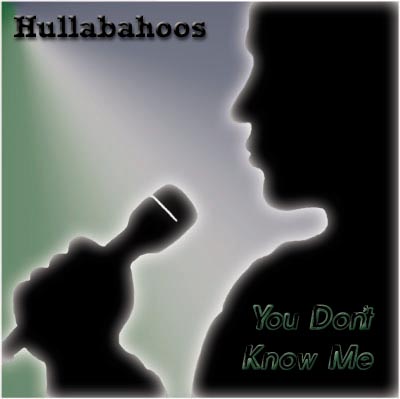 These guys just keep getting better. In my review of The Hullabahoos' previous album, Xerox Nation, I complained that, while the performances were great, the whole album suffered from being put through the ballad filter. There was too much swoon music and not enough snap. Well, with You Don't Know Me, they've added kick to their sound, with more inventive arrangements, stronger bass lines, and a more diverse repertoire. The great performances remain, making this disc a winner.

I wouldn't be able to review this album without mentioning Mark Dreusicke. This young man arranged every track (OK, so he had help from Keith Bachmann on Blurry), much to the benefit of the group's sound. Cool syllables and riffs, interesting bass lines, and appropriate use of sustained notes keep me listening throughout the disc. The strong percussion (uncredited) and tempos help the group turn in energetic performances track after track. To the group's credit, they also keep up the intensity on the ballads (When You Come Back Down and Right Here Waiting).

There are a number of great soloists on the disc, and none are cringe-worthy in the least. Brent Doolittle does a great job with Richard Marx's Right Here Waiting and even more so on 10,000 Maniacs' Because the Night. Side note: I love when all-male groups can pull off chick originals with confidence and style (and vice versa), and this track is a perfect example. More soloing highlights include Wesley Joyner's ballsy turn on Hard To Handle and Nic Von Bank's version of My Sacrifice. This guy was only a freshman?! I'm looking forward to hearing more from him.

My main complaint is the general thin tone that permeates the disc. The trouble isn't the arrangements or group sound, but the timbres of the individual vocalists. The production seems to add to this, with some buzzy fuzz here and there. Most of the time it sounds just fine, but on a couple of tracks (Faith and Melt with You), it becomes a bit grating. This is a minimal complaint, but certainly something they could stand to work on in the future.

The hidden track (James Taylor's version of You've Got a Friend) is also a bit unnecessary. There are already 17 polished and solidly performed tracks on this album. That's more than most groups ought to attempt to record in one year, and they do it with aplomb. Throwing a weaker track at the end (and connecting it with a non-hidden track ... when will groups learn?) cheapens the ending of the disc. The track isn't bad, but it doesn't match up to the rest of the disc. Why include it?

Ahhhh, but a few more highlights to finish up. Reggae! I had never heard a successful reggae tune from a collegiate group until The Hullabahoos' cover of Sweat. The vocal percussion on this track understands the groove, and sits in it perfectly. The group scores again with an Usher cover (compare U Remind Me to Hurricane's You Make Me Wanna). It's not the show-stopper, but it's fun. Ultimately, the album is worth buying just to hear My Sacrifice, Because the Night, and Rain King.

The University of Virginia Hullabahoos' new CD is good. On You Don't Know Me, they have combined excellent arrangements, good to excellent vocalizations, and some less than good production to produce a very listenable CD.

The background singing may be the best part of this CD. The 'Hoos have a great unit sound. They understand how to utilize the dynamics within a song to build a foundation the soloists can use. For the most part the soloists are very good, especially on tracks 1, 2, 3, and 11. Yet, there are just as many tracks where the soloists lack energy, miss notes, or fail to use the vocal tools a solo singer must use (tracks 5, 8, 12, and 13). The vocal percussionists do a marvelous job with both the selection and musicality of beats.

One problem with this CD is that the background singers often lack high frequencies. Yet, I could not find any musical reason for someone to have removed them. I couldn't fully enjoy the work because it lacked a full spectrum of sound.

On the other hand, the CD has great flow from track to track. A good song is not just adjacent chords, and a CD's quality can be elevated if its contents are not just adjacent songs. While the songs can stand alone, each one is also a segue to the next. This really increases the listener's pleasure.

The Hullabahoos have produced a CD to be proud of. Even though there are some problems, the musical quality of The Hullabahoos' You Don't Know Me will entertain any college a cappella fan.

P.S. Other groups should take note of the hidden track imbedded in Track 17. You've Got A Friend is a great piece of music. The 'Hoos threw it in and did a reasonable job, but this song deserves better. Other groups should learn from The Hullabahoos' mistake — record a song only if you're going to put in the rehearsal time it needs.

The Hullabahoo's latest venture, You Don't Know Me, is a good example of the old adage "know thyself". It's amazing what great things are happening in the a cappella world, with high quality and innovative CDs being made every day. Unfortunately, with that improvement comes the absurd expectation for a group to be everything, do everything, become the perfect a cappella group, which is simply impossible. This, however is the task The Hullabahoos tried to accomplish with this album.

Basically, I think these Virginia men have bitten off more than they can chew. At a whopping 65 minutes, the album goes a lot of places: "modern" rock, oldies, traditional male group favorites; fast, slow, and everywhere in between; complex arrangements with complementing production aspects and standard fare; even a women's group song. With such a large array of product, all of it simply can't be great.

While tuning is generally not a problem for the group, the blend leaves something to be desired. Whether the problem lies in voice or production, the top voices stick out; their sound is too pointed, almost nasal at times. When singing softly (When You Come Back Down), The 'Hoos blend melodiously, but in louder numbers with more sustained moving parts (Melt with You), they just sound out of place or over-processed. The upper registers need to learn to fit into the mix better. Conversely, the basses consistently sound like they are singing in another room. While the dull thud effect can have its moments, the lack of poignancy in any of the bass motifs adds to the overly top-heavy blend.

The percussion also gets tedious. While through the first couple of tracks its adds a nice flourish, it remains basically the same in almost every song. Additionally, it is needlessly complicated throughout, like the percussionist is just showing off what he can do. The worst offender is Hard to Handle. The 'Hoos rely on their percussion too much.

The arrangements for the most part are pretty good. I'll give Mark Dreusicke some credit, as he did every song. Unfortunately, this leads to a monotony of style that could have been spiced up with different arrangers.

Don't get me wrong, the group's not bad. When singing chords, or doing slower melodious ballads (Because the Night; Right Here Waiting), they can really click. It's only on percussive, heavily rhythmic, or fast-moving parts that they get in trouble (with the notable exception of Smooth Criminal, a fun and well-made track). I'm all for a group expanding its boundaries, but The 'Hoos need some more practice before they break the ballad mold and effectively tackle such varying genres as '80s, alternative rock, and modern R&B. The album gives the impression of a bunch of preppy college kids taking a cappella too seriously to truly master less-Glee-clubby tracks like Hard to Handle and U Remind Me. With a little practice and relaxation, The 'Hoos could come back with a great album next time.