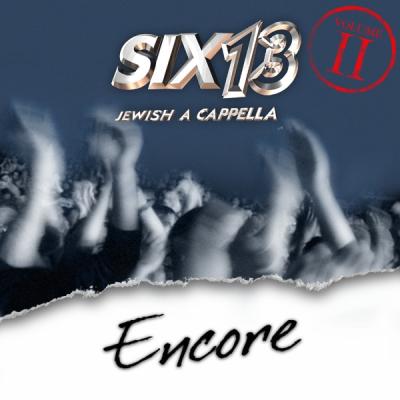 Al Hanissim starts things off with some strong, belty homophony and catchy pop melodies (although the fake-sounding crowd noises aren't a plus to the track). But on its tail comes The Miami Mix with clumsy and distracting tuning artifacts, as well as simply being a less than thrilling composition.

Putting this fan's growing anxiety at ease, Son (a rare English track) starts and we're fully back on track again with a solid rock song that will appeal to fans of heavily effected vocal guitar, a la FOCS. Gadlu follows with an impressive tenor lead and a jazzy R&B groove. But it's when D'ror Yikra kicks in its ethnic dance groove that you'll start that head bob and half smile that says "Oh yeah. THAT'S Six13!"

Unfortunately, there are still a few slightly rough passages to weather.

Acheinu is a passable rock ballad with a big octave dropped bass and a drum pattern that's far more aggressive than its gentle, lyric lead. Some solid arranging keeps our interest where the song's core might not done it alone.

Things continue to pick up, but the listener's attention is really drawn to the gorgeous chords of Carlebach's Cracow Nigun/Adir Hu. This track is noteworthy not only for its stunning sonorities but also for being one of the only a cappella tracks to make the listener wait nearly 3 full minutes before lyrics begin. Only some uncomfortable falsetto work brings the score down just a peg on this beautifully arranged song. There's no question that, if well-sung, this a track to bring the house down live.

I once called Six13 "the most accessible, enjoyable and talented Jewish a cappella group I've ever heard." While perhaps a hair more vulnerable to contenders, this group remains at the top of the Jewish a cappella genre. I highly recommend it as a very worthy addition to any a cappella collection.

My compatriots will occasionally write: "That was a bright, shiny album." I usually didn't understand what they meant. But now, I do. The second disc for Jewish a cappella group Six13 is the epitome of a bright-sounding disc. Music seems to crackle and sparkle from my speakers. Full of an almost effervescent joy, Encore is performed and produced with a crispness that is at once overwhelming and intriguing. The arrangements are moving, the tuning is soothing, the production is smoking and the drumming is kicking. The soloists may sing too nasally for your particular taste. Otherwise, yeah, you got it, they are banging!

This album almost sounds like a concert. The title is Encore, after all. Much like baSix's recent album, Encore opens with enthusiastic audience applause mixed in and leading into Al Hanissim. It's a song of thanks that literally explodes as the audience cheers. The concert theme continues with The Miami Mix, unarguably the worst "song" on the disc. Why else would you put a ménage like this on the album unless it's to point out to listeners that if you come to our concert this is how much fun you'll have. Actually, it should be renamed The Mom Mix as it sounds just like the type of medley that would get mothers to smile and jump around with their little children at an after school music camp. Not a bad thing, just confusing and distracting on an otherwise strong album.

After listening to those first two tracks, I really expected the audience to clap and scream after the remaining songs. Okay, so maybe that's just me. I'll confess that's what I did after listening to the next three tracks, Son, Gadlu, D'ror Yikra. Those songs are simply amazing — worth the price of the CD.

As masterminds behind the brilliant Home from their debut album, Alan Zeitlin and Mike Boxer have worked their magic again with Son. The driving passion behind this bittersweet story of a father and son dealing with the ravages and loss of war tugs at the heart and the head. Gadlu sounds like m-pact doing a cover of a Basia/Manhattan Transfer tune: slightly poppy, steeped deeply in R&B groove with some heavy jazz inflection. Boxer's solo is amazing and the true standout on the disc. There is a moment about two-thirds of the way through the song when Mike lets out this joyful scream that completely centers the emotional expectations of the song. You feel uplifted. The song almost goes into this stomp-like quality that would have made it a truly remarkable work.

The Middle Eastern flair to D'ror Yikra will make your abdomen and hips undulate rhythmically and completely beyond your control. It may seem weird to talk about religious dance music, but I have no other descriptor for how much this song brings sexyback. Listen and you'll understand. And funnily enough, because I do a blind listen on the first round, I though they were doing a cover of Marc Broussard's Home and that made me giddy for no good reason.

The rest of the album doesn't hold my interest as well as that mid-section, but the songs aren't bad. The backgrounds vocalists continue their polished and pleasing tones riding on some massively good arrangements, especially the very clever Lo Yisa Goy with bassist Avi Ishofsky's effective "plummet note" during the solo. Boxer as executive producer did a brilliant job of harnessing the talents of mixers and editors as diverse as Ed Chung, Jeff Thacher, Tat Tong, Ed Boyer, James Gammon and Andrew Schwartz. It is a testament to his creativity and vision that he was able to create a cohesive and distinctive sound with all of those different hands in the pot.

Music gracefully transcends cultures, but complex languages like Hebrew are difficult for non-speakers to embrace in music. So it's incredible and exciting that the ideas and stunning music of Encore are so universally likeable and accessible. When the first downbeat hits, we speak the same "language" as Six13.

Where their self-titled debut album slipped with an it-all-sounds-the-same offering, Encore shines with a wealth of styles to appeal to every listener. The most enjoyable times are the more unexpected times. Gadlu is jazzy, funky, and hip, breaking assumptions for religious music. D'ror Yikra has a strong exotic Middle Eastern flair that fits perfectly as a middle-of-the-album bridge. And even though the first two and half minutes of Carlebach are sung on the same "na-nigh" syllables, the song constantly surprises: a true testament to the arrangement creativity on Encore.

The most striking aspect of director Mike Boxer's talent is the inventiveness he employs on his diverse and selective source material. The lyrics for Al Hanissim come from a "prayer recited on Chanukah and Purim". Sha'alu's lyrics are Psalm 122. Lo Yisa Goy is taken from the Book of Isaiah. While most a cappella groups race to cover the latest radio hit first and best, Boxer walks us through his culture's history while keeping the sounds and styles modern and fresh. Six13's efforts are the definition and shining example of progressive a cappella.

And Mike works with good company. The sextet blends perfectly and takes the energy level sky-high. Exceptional performances include Alan Zeitlin on Son — he could easily front any vocal band — and the remarkable lower range of Avi Ishofsky on Lo Yisa Goy. As on their debut album, multiple engineers are used, this time with great success to keep the production on Encore first-rate and carefully constructed.

Six13 has mastered their element. Encore is as good as it gets for Jewish a cappella, and stands among elite a cappella albums in every genre.

To order this CD, visit Sameach Distribution; the CD is also available at Judaica stores nationwide and wherever Jewish music is sold.