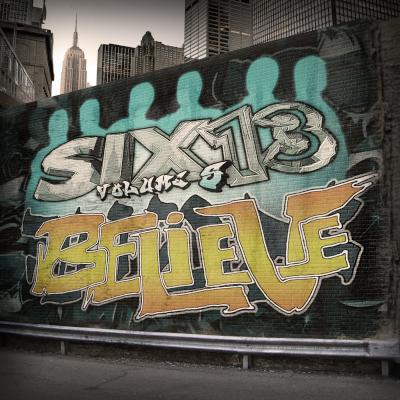 Six13 keeps being a truly amazing a cappella group, delivering high quality music on a consistent basis. But to be honest, Six13, Vol. 5: Believe is a mixed bag of entertainment. Only one of the tracks is out of this world while the others seem pretty entrenched at being good, ok, and eh — not something that I expected from the guys.

My initial reaction was that they weren't trying as hard as they had in the past. There are lots of intonation problems throughout the tracks and it lacks the emotional intensity of earlier albums. You reach a certain accolade level and unless newer artists continually challenge you, the propensity to stagnate occurs. Six13 has seemingly hit that plateau. But even at this level, they are still better than most a cappella hitting the airwaves.

Forwards and backwards the album is an overall fun listen even with the stilted musicianship. The upbeat numbers are catchy and pun-filled as usual. The hook on Good Shabbos is not to be believed. And jumping on the bandwagon early enough, Pesach Shop sends up Macklemore and Ryan Lewis's Thrift Shop fairly well and includes the additional gems Brei Brei Brei/Bye Bye Bye and Love Grains/Love Train in the medley. The song definitely leaves you laughing and dancing. The ballads are ethereal and moving. But the bread and butter of the group continue to be their originals no matter the tempo.

The original Haneirot Halalu opens the album as this sweeping ode to the joy of Chanukah and features an international choir of Six13 fans joining in on the chorus. It's a similar tactic that the Beelzebubs took with their Kings and Queens track from BATTLE and Sing 8: Too Cubed. The additional voices add a great deal of both universality (all voices, all people) joining in on the harmony, and uniqueness by promoting what each individual brings to create the whole. Whoa.

But it is the medley of Yesh Tikvah/Ki Malachov/Mi Shema'amin that stands out. Guest artists Benny Friedman and The Maccabeats create an incredible playground of sounds and rhythms that make you smile. The third part of the song Mi Shema'amin has a Middle Eastern swagger and vocal quality that is reminiscent of Basix's Simirak.

Not so successful are the songs that sit comfortably in the middle without really doing anything — losing a lot of the musicality that makes this group so formidable. Chanukah Rights is the most egregious, forgoing blending for shout choruses and poor imitations of celebrities.

While their previous works are much better than this, Believe is a solid endeavor from Six13. Get it if you enjoy non-mainstream music or awesome parodies of current hits.

Just so you know, it's a major deal that pro group Six13 has put out five full albums since 2005. Let me count up all the other pro groups that have similar output figures ... *crickets* ... Yeah, the number is pretty low.

I'm a believer! While a few pro groups came back from a "hiatus" this year, Six13 has been enjoying their successful ride and love of Jewish-themed music right at the top, right from the start, and how lucky we are to experience such commitment. Deeply affecting tracks, wildly humorous tracks where they manage to charmingly poke fun of themselves (you will absolutely howl over Chanukah Rights), extraordinarily professional production from a gaggle of a cappella's finest, wailing leads, re-imagined covers, slick originals, solid collaborations with a cappella friends, giant (stapled!) artful liners that cover everything about the music and band ... geez, way to leave nothing for this RARB reviewer to complain about, guys. *throws hands in the air* Maybe I'll just whine that I can't get this ticklish delight out of my head: "Jews all over the world, avoid bran ... Don't let it rise!" (Oh alright: I gave a "4" to Chanukah Rights because the same basic drum pattern carries us for too much of that lyrical and voice-over tour de force.)

So, we're left to talk about what's really right on Believe so we can try to be as good as Six13 in our own musical efforts. If you're an a cappella dork, Mi Ha'ish is a nice one to get your hands on to study the composition. You'll hear a lot of the same background syllables that cycle through in collegiate fare; the big difference being, Six13 does not put accent marks over the unimportant syllables, and they know when to open up their jaws and when to snap 'em shut. If you want to hear how to combine songs smoothly, check out the convincing result on Yesh Tikvah / Ki Malachov / Mi Shema'amin. If you want to take on a monster smash hit (Thrift Shop) and make it your own, Pesach Shop is your example. If you want to experiment with production for a cool club sound, I direct you to Good Shabbos. And for wit and style advice, and to hear a wild but genuine celebration of heritage that at once slices the heart with emotion and warms the spirit with earnestness, I direct you to the entire Believe release.

I'm standing by the for the next series, Six13!

Make some signs! Prepare to march! A movement is coming! Six13 is drawing some much needed attention to an under-represented culture, not only in a cappella, but in the music industry as a whole. Six13, Vol. 5: Believe may not be the catchiest call to action ever. It certainly doesn't roll off the tongue like the classic "What do we want? When do we want it?" chant. However, this album is filled with Jewish pride and a passion for making the traditions of faith resonate with a modern audience.

Songs like Pesach Shop are fun. This track takes Thrift Shop, Bye Bye Bye, and Love Train and uses parody to sing the praises of unleavened bread. Good Shabbos is another entertaining twist on a radio hit. But the anthem for this album is Chanukah Rights. With lyrics like "I see your Mariah Carey and I raise you Adam Sandler", Six13 throws down the gauntlet for equal representation with the jolly ol' elf who dominates from Thanksgiving through New Year's. Haneirot Halalu starts the album with one of the most energetic and joyful songs about those eight days and nights that I've ever heard.

Six13 doesn't just sing about bread and Chanukah. No sir. They've taken on one of the most recognizable traditions in the Jewish faith with One Mitzvah (The Bar Mitzvah Song). As much as I love the playful side of Six13, they really shine when they take serious lyrical content and give it their all musically. Yesh Tikvah / Ki Malachov / Mi Shema'amin, Mah Rabu, Mi Ha'ish and Shema all are very well done. And the bass solo on Shalom Rav is gorgeous.

Six13, Vol. 5: Believe has some heavy hitters involved in its production which makes the sound absolutely fantastic and polished.  Perhaps too much so. The mix is beautiful, but the studio tweaks make the blend so perfect it's almost dull at times. The arrangements don't get lost, thankfully, though there's nothing special going on in that department. This album is a powerful statement about having pride in your faith, and having fun at the same time. In terms of musical innovation, it's merely average. But everything else more than makes up for that lack.

This is a small item to stack against all the X-mas albums out there, but it's a strong start. Hopefully this movement will catch on. Maybe a future author of the caliber of Charles Dickens will write A Chanukah Carol and a movie version will be made featuring the muppets. That's a dream worth having and Six13 is paving the way! Keep it up guys!