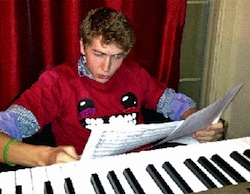 Review philosophy: What are the artists trying to do? How well are they doing it? Is that thing worth doing?

Patrick is a composer, sound designer, music director, and performer who works primarily on music for the stage and visual media. He can be heard singing all around Chicago, from Orchestra Hall in Symphony Center to the Chicago House of Blues. He has worked with choral composer Paul Caldwell at the Youth Choral Theater of Chicago. And in 2011 he music directed and composed additional music for the new musical Of Mice & Manhattan. He worked with award-winning playwright Barry Kornhauser and Mary Loesser, daughter of deceased Tony award-winning composer Frank Loesser, to bring this incomplete and never-before performed Frank Loesser musical to life. While studying music composition at Northwestern University, he directed the Northwestern Undertones and oversaw the production of their latest album rock paper shotgun.

In 2013 he co-founded VoxLabs, an organization dedicated to re-imagining and dramatically improving every aspect of contemporary a cappella music, from creation to distribution.