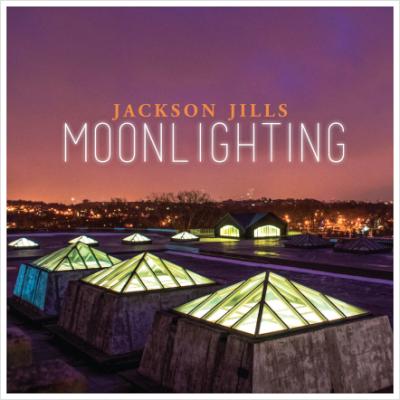 The Tufts Jackson Jills' latest recording Moonlighting offers some pretty standard fare for female collegiate a cappella. Fortunately, there are some occasional surprises that make you stand up and take notice. The songs that are stellar strike overwhelming sonic chords and emotions. Unfortunately, there are several songs that completely sink the album like an anchor in the middle of the ocean. But, depending on your outlook and overall enjoyment of the genre, this could be one of the top female albums of the year.

Some Nights should not open nor even be included on the album.

The middle of the Moonlighting is absolutely fantastic. The mash-up of Feel So Close and Feel Too Close is brilliant. The songs flow so well together lyrically, musically and sonically, creating this dynamic narrative that gives you all the feels. The opening was the first time that I had a "this album is turning around" moment. I have fallen in love with covers of Kimbra's Cameo Lover since hearing Sarah Vela of The Riveters smash my heart when judging selections for sing 11: One Louder. The Jills put their own unique love on the song and it's just as riveting (heh) if not as magnetic as Vela's. The background loses me for a bit in the bridge, but that doesn't take away from my overall enjoyment of the song. And then there's Barton Hollow. It's been covered to death, but the Jills really bring out a gritty earthiness that I haven't heard in several of the others.

White Blank Page should not close nor even be included on the album.

What surprises me the most is the fact that the expected songs are the troubled tracks on Moonlighting. As a collegiate cover, Some Nights is ubiquitious for all collegiate types. I wish the Jills hadn't included the track on their album because it makes the group sound so anemic and — let's face it — pretty juvenile. Also, the two Adele covers Make You Feel My Love and Someone Like You sound like the group isn't putting in enough effort.

Moonlighting offers up some great if not consistent music and the Jackson Jills should be really happy with the release. In this digital singles age, if nothing else, I recommend that you download Feel Too Close and Barton Hollow for inventive arrangements and emotionally charged performances respectively.

The long recording period makes Moonlighting seem awfully dated. Recordings of Some Nights, Barton Hollow, and a mashup including Too Close pinpoint this album very specifically. At this point, a recording of one of those songs has to be really, really outstanding for me to not roll my eyes while listening. These aren't outstanding. Fortunately, the production is decidedly not dated: Plaid Productions and Ed Boyer did a stellar job with the recording, editing, and mixing. The Jills may have been burdened by clichéd song choices, but they made excellent production choices.

This group excels in extremes: my favorite track on the album is the ballad-y Make You Feel My Love — as performed by Adele but thankfully credited to Bob Dylan — which has a simple, lush, velvet treatment of an evocative melody. It feels like they knew not to do too much, and the simplicity of the arrangement really shows off the technical ability (especially regarding tuning) of the group. My other favorite track is on the complete opposite end of the spectrum: Cameo Lover by Kimbra should be on some rom-com soundtrack somewhere, right at the moment at the club when the male protagonist realizes his pretty best friend has been in front of him the whole time. It's the perfect dance track to highlight a moment of revelation. Domino hits some of the same notes, and Jordan Thaler's solo is fluid and powerful.

I wish the group had been able to take these tracks and make a much more interesting, full album. Instead we get a years-book release that has some beautiful highlights, plus some tired lowlights of songs. Since my three favorite tracks were recorded by three different groups, I can't say they're headed in the more interesting direction — but that's certainly where my hope lies.

Moonlighting, the latest from the Tufts Jackson Jills, is what I've decided to call an album of line-drives. Nobody steps up to the plate and strikes out, but they all fall short of hitting a home run. Across the board, it's a consistently good album: commentary that somehow hits me as sounding overly harsh yet somewhat lenient.

In some respects, that consistency speaks volumes about the talent of these ladies. Recorded between May 2011 and February 2013, Moonlighting reflects the different incarnations of the group from 2010 to 2013, yet the album doesn't feel disjointed in terms of the material covered, the style, or the quality of the group from track to track. In other ways, however, it makes it an interesting work to review since it's so hard to single out specific highs or lows.

I do want to highlight the contributions of Jessie Belfer and Andrea Bresnahan, the 2013 and 2012 Musical Directors for the group, both of whom produced the album along with Alex Green and Alexander Koutzoukis of Plaid Productions. Belfer arranged six of the ten tracks on the album including Feel Too Close, a clever mashup of Feel So Close by Calvin Harris and Too Close by Alex Clare. For her part, Bresnahan has a number of strong solo performances on the album (I particularly enjoy her rendition of Barton Hollow), as well as a couple of vp credits to her name. Green and Koutzoukis also deserve a nod for the recording, as well as Ed Boyer who mixed the album, and Dave Sperandio who completed the mastering. You'd be hard-pressed to find fault with any of the technical aspects of the record.

It's interesting writing a review that feels critical when there really is very little I can find wrong with the album. Even when trying to be nitpicky on repeated play-throughs, I can only critique things like some background syllables (Barton Hollow and Make You Feel My Love both have areas that are a little distracting), or the strict adherence to the source material in most songs. I guess my biggest complaint is that I kept waiting for something to be a grand slam, but there was never a moment where anything just jumped out and grabbed me; I think the Jills are more than capable of producing that moment. I would love to see them push themselves a little further in the future. Taking risks leaves them open to falling flat, but playing it safe is only holding them back from what I think they could be putting out there.