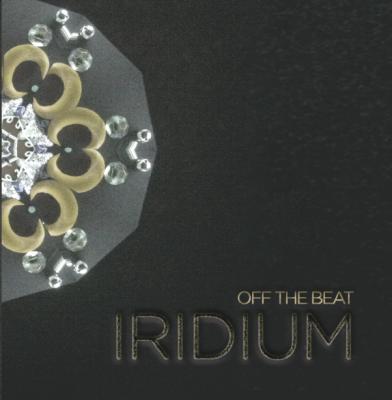 From its opening trill, Iridium brings a fresh sound to the trademark Off the Beat energy. Rolled "r"s give Lies that extra spark that turns a good song into a great one, an acoustic touch that makes this beautifully-produced album sound alive and up to the moment. As the album continues, the sound veers from natural to electronic and back in the space of a chorus, welcome contrasts that give these songs extra oomph.

All the soloists are first class, this time around. Beyond the generally expected good sound, the lead singers sound distinct from one another and suit the songs they've been given. Resolution is saved by a particularly strong solo delivery, likewise the lead on Lies floats above the background, and Over the Love sends us home on a high note. Even the fuzzier songs work — it's hard to imagine anything else on This is Gospel, and on that song the vocal melody serves as the connection between the naturally choral and electronic-tinged backgrounds.

Off the Beat has stuck to the mainstream with its choice of songs — even when the title didn't register with me, the tune inevitably did. The result is an accessible album that also has to work a little harder to find its way. Royals is a particular success — although Lorde and Weird Al are two very hard acts to follow, the Penn group sings with its own hometown inflections, giving the song an American gloss that helps this version succeed.

Iridium has a few grooves but it is not a dance record — this is the land of the midtempo power ballad. This collection of songs will keep you company in the car, at the gym, or on your daily circuit. It's radio ready.

Having listened to Off the Beat on and off for roughly 25 years now — dating back to their first cassette Rhythm Method — it's entirely possible my expectations were too high. But as far as I knew, the group had maintained its reputation for first-rate a cappella renderings of cutting-edge repertoire, with an attitude and swagger of a group that was cool without caring how cool anyone thought they might be.

Unfortunately, there's little evidence of that on the oddly-named Iridium — oddly, in that "iridium" is supposedly the second densest element and quite frankly, there is little density to be found here. Though there is a certain brittle, impenetrable edge to this album that is consistent with iridium — but that's not offered as a compliment.

Now if the release had been titled Wail (perhaps as a companion to the group's 1995 release Flail), there would be far more truth here — at least insofar as the soloists are concerned. There isn't a dud to be found from the solo roster on this album, and it's hard to even single anyone out, but Kobie Mensah-Brown doing his best Chris Martin, Janelle McDermoth on Elastic Heart, and Eleanor Thompson on Green Garden deserve special recognition.

But the energy, the attitude, and the passion really end with the solos. With the exception of the vocal percussion, the backs are generally lifeless when they're present in the first place. And in one case — on Matt Corby's Resolution — they sound so artificially looped that they may truly be on auto-pilot.

Not helping matters are the slavishly transcriptive arrangements. These take the absolute most literal approach to each song, replicating simple, chordal instrument lines that may be effective thanks to the varied sounds of the instruments and their treatment in the mix, but have vocal lines that are devoid of any such varied timbres, dynamics, and post-production treatments.

Further to its detriment, the group favors repertoire that could generously be considered hypnotic in its repetitiveness, and atmostpheric/ethereal in its mix and sound pallette, but — with the possible exception of Royals — the folks at Sound Crash have done OTB no favors. This is a very dry mix that further exposes the transcriptive arrangements as sterile and mechanical, rather than blurring them a bit into a background more consistent with the imitative style and sound the group seems to be seeking with the material they are covering.

And one further quibble: unnecessary interpolations are unnecessary. Words to live by in a cappella in my mind, and something the OTB of old would likely have scoffed at as cheesy and passé. Whatever your thoughts are on this topic, the use of interpolations in final choruses here comes off simply as a reflection of having very little left to do with the arrangement that could be interesting. Why else would we get Counting Stars within Green Garden, Losing My Religion in Lies, and most bothersome, Titanium and Let It Go (yes, THAT Let It Go) in Elastic Heart? At best, it's glaring and uninteresting, and at worst, it's just tacky.

In all honesty, I never thought I'd have to write the above sort of comments about Off the Beat, but I suppose collegiate a cappella is cyclical and even groups with dynastic tendencies have off years and off albums. This is a thoroughly average album, with slightly more interesting repertoire choices than is the norm and uniformly fantastic soloists. If you're the sort of person who needs to own everything a given group ever records, by all means, buy away. If you love this repertoire, you can hear a lot of it sung more compellingly elsewhere, though this still may satisfy. If you're new to OTB, this isn't the album you want. Indeed, here's hoping next time, the group can return to their prior success of giving us something a bit less like iridium and a bit more like oxygen — something we all truly need and can't live without.

I have a challenge for Off the Beat, a group I have enjoyed and admired since my earliest beginnings in a cappella. What I hear on the group's latest album, Iridium, is a collection of Contemporary Alt/Pop with some Rock thrown in for good measure. The singing is good and generally in tune, the leads are very good, the arrangements range from functional to good, and it is, overall, a solid album. The trouble is, I've heard this all from OTB before, and it's not satisfying to me anymore.

Let me back up a moment for some context. In the early days of collegiate a cappella, OTB established itself as one of the only groups out there with a distinct sound. In a world of mediocre imitators, they were a breath of fresh air. When you popped in an Off the Beat album, you knew who you were listening to (after all, who else could make "joh" sound quite so convincing?). They had a string of excellent soloists from the early to mid-2000's that cemented them as one of the groups to beat, certainly in the recorded world, if not live as well.

Then something happened. The a cappella boom of the last few years has given groups access to resources, perspective, and opportunity that never used to exist. Where once the field was littered with interchangeable, mid-level talent, we now have a good core of groups putting out top-quality, imaginative albums that go beyond simply being a nice collection of recognizable songs performed with voices.

To be blunt, the recorded a cappella world has evolved, and OTB hasn't kept pace.

But here's the thing (and herein lies my challenge) — I think that Iridium absolutely demonstrates the capacity to rise to the occasion. What's missing is a sense of purpose and vision — something to make this feel like more than just a string of hits with a minor OTB spin. I challenge OTB to get back to their roots as a recognizable brand in the collegiate scene by reworking their old tactics, and updating them for modern recording.

A great place to start would be to totally shake up the arranging approach. These songs are virtually all transcriptions of the originals — the biggest creative departures usually come in the form of another song being awkwardly shoehorned in (an old, and, in my opinion, tired OTB trick). Why not instead work toward creating some really unique versions of these songs that showcase the classic sound of this group?

Royals is incredibly overplayed now, but I'd still be interested to hear what a truly different, Off the Beat version might sound like. Ditch the familiar drum beat, don't throw in the Rihanna tune, and go way more Alt/Rock with it. Or do something else entirely, but do something that's uniquely your own. Treat the source material like a starting point for your own artistic expression, and see where it leads.

Better yet, write some music, and let us hear what you have to say as a group! This album demonstrates too much musicality for me to believe that nobody in the group can write a tune. I want to hear that.

Iridium is a fine album that reveals a good group not living up to its full potential. Off the Beat has reached the pinnacle of what the group can achieve by singing faithful covers with its own small twist. To get to the next level, this group needs to use what is tried and true about the group to exceed expectations, not just meet them.

Iridium is currently available on Spotify and iTunes.