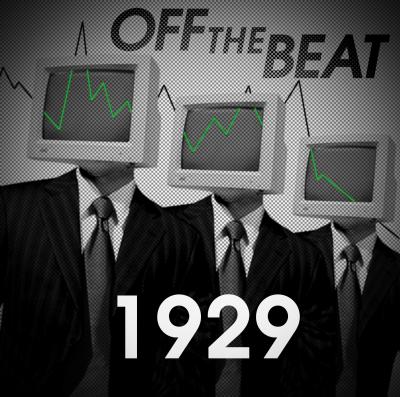 Like any great crash, 1929 eases you in before the hammer falls. The album opens melodic, waxes acoustic, then explodes into noise. And it's extremely effective.

I enjoyed this Off the Beat album immensely, and more so on multiple listens. (OK, except the medley. I could do without the medley. If I listen to this album after I finish this review, I will definitely skip the medley.) The album is not only talented, it feels intentional. This group chose when to get loud, when to back off and when, as on Just A Phase, to spend what feels like forever noodling around on the intro. Yes, I hate intros. Yes, I don't think this one is all that interesting, even with all the nifty arrangement quirks. At the same time, the song was constructed artfully and creatively, and I think the heavy breathing worked perfectly. The whooshing is way too loud, way too human, and way too cool. Very nice work.

Lucy is my favorite arrangement, in all its busy splendor. It starts with a touch of the choir nerd, then opens up into a full-on rock song. The singing and the energy are both good; what a relief not to have to forsake one for the other. Also the solos generally work for their chosen songs. I'm particularly fond of Dave Caulk on The Bird And The Worm. That song, in all its loud and engineered glory, still sounds natural to me, like a spiffed up live performance instead of the sampled, collage vibe I get from later songs. It follows nicely out of the youthful, percussion-free throwback Because, establishing that this is going to be an album to watch.

Jonah Platt seems like he deserves special mention, for directing the group and overseeing such a joyful final product. I also liked his solo in What Goes Around...Comes Around, which he arranged and which was an overall success. Fellow group leader Donna Budica, this year's president, rocks out on Losing My Ground and rescues The Moment I Said It from banality. I know, the group does a great job on that song and it was probably really hard to sing and it's a nice change of tempo, slowing things down. Whatever. The rock songs are funner. Losing My Ground was great, and I don't even like that song.

Love Song was one of the few tracks that didn't do much for me. The performance here is fine, and it's a fun song. It just seemed so ordinary, compared to most of the other songs. Solo, melody, good tuning, yeah okay, where's my next hit? The Pretender was the other pseudoflop, though I'm maybe too insider to say for certain since I just heard the Amalgamates offer the same take on the same song, to what I thought was greater effect. The Off the Beat version doesn't really get going until halfway through, and by then I've checked out. It's followed by Division, a nice tempo change, but kind of a weak song that never gels. Its successor, Monsters, has a great pop and gets things revved up again.

Comparisons aside, this album is fun and it rocks. Go get one and see for yourself.

When I first entered the world of collegiate a cappella over a decade ago, University of Pennsylvania's Off the Beat was the gold standard group. Their soloists wailed. Their arrangements were complex masterpieces. They rocked hard. I quite literally studied OTB arrangements before trying my hand at one.

Despite complete turnover in membership every four years, OTB has managed to maintain dominance in the realm of collegiate a cappella. This has not changed with 1929, which racked up CARA nominations in every mixed collegiate category. Indeed, 1929 is the best collegiate album I have heard in a long while ... but it leaves me unsatisfied.

The opening track, Because, should have been naked voices. Instead, we have studio effects on every voice. It is mechanized perfection and makes it hard for me to believe the rest of the album. If they can't sing this simple and beautiful arrangement without heavy production, how can they possibly handle the more complicated and at times fiendishly difficult arrangements on the album?

Take, for example, Elephant Love Medley. The number of key and tempo changes is daunting. Surely skilled singers are needed to pull it off. Perhaps not.

Listening past the production, the masterful arrangements still abound, particularly the ones by Jonah Platt. The soloists are also consistently great, and Donna Budica is deserving of her solo CARA nomination for Losing My Ground.

I can't help but break out my old BOCAs and listen to the OTB of yesteryear. Perhaps I've gone from idolizing teen to weary adult, but it sounds to me like OTB has gotten on the collegiate bandwagon of reliance on technology to achieve what was once done with (mostly) naked voices. They've gone from the Sex Pistols to Kelly Clarkson.

Surprise! 1929 isn't your typical Off the Beat. album. Not even close. Sure, most of the signature stuff is still there to varying degrees. OTB hasn't walked away from the aggressive backs, thumping percussion, and intricate arrangements that made them a household name in the a cappella universe. Yet now there are some new things in the mix. Somewhere between The Empty Set and this new release, hip hop/R&B influences managed to seep into the sound. There is a pop presence on this album absent from much of OTB's work, especially the most recent recordings. The question is, does it all work?

Well, yes and no. It's great to see OTB challenging itself to break new ground, but there's no question that the group's strength remains its ability to rock the house down with powerhouse alt-rock songs. Tracks like What Goes Around...Comes Around and Love Song sound a bit limp next to The Bird And The Worm.

That's not to say that these songs don't have their own strengths. The arrangement of Love Song may lack the power that distinguishes this group's most impressive work, but it's undoubtedly well conceived and borrows traditional OTB arranging techniques (for example, words taken from the solo used in the background for emphasis) to good effect. Similarly, the Fergie tune Losing My Ground isn't stunning, but it does settle into a nice groove. Perhaps these are the humble beginnings of a new direction.

I once wrote in a review that one of OTB's greatest strengths was the consistent quality and commitment of its soloists. Sadly, one of the major stumbling points of this album is solo talent, or perhaps more specifically poor matching of soloists to songs. The two returning stars from The Empty Set are Donna Budica and Jonah Platt. Platt turned in one of my favorite solos of all time with The Kill, but this time around it doesn't sound like he has anything to sink his teeth into. His turn on What Goes Around...Comes Around is solid but lackluster in comparison to his prior work. Ditto for Donna who is strong on both of her tracks, yet never has anything quite like the vehicle that Mercy on Me was to show her chops. The rest of the soloists run the gamut from average to good. Nobody is terrible, but nobody blew me away either. Better pairings of soloists and songs next time will probably raise the bar back to OTB standards.

I would be remiss if I didn't at least mention the final track, Elephant Love Medley from Moulin Rouge. If you're like me, seeing this in the track list raised an eyebrow. Well, it grows on you. The arrangement is actually pretty clever, and darn it if Dave Caulk doesn't sound an awful lot like Ewan McGregor. OTB has always had a sense of humor and it often serves them well. Still, I hope that this sort of campy fun never overrides what Off the Beat does best — rock hard.