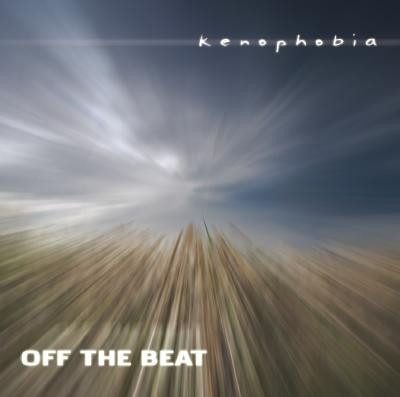 Off the Beat starts off right with Question!, a traditional rocker that is loud, busy and properly soaring. It's the best song on Kenophobia, the new album, and sets a great tone for the songs that follow.

Once again, we're treated to a consistent, technically proficient recording from the UPenn hipsters. Some songs are better than others, but all show the professionalism that this group is known for. This year's bunch has all the familiar trade marks — the jins, the johs, the words — with a few bonuses. There's more variety than usual, and the vocal percussion is particularly explosive. Some songs even have a strong dynamic arc, like the powerful crest in When We Are One.

For inspiration, Off the Beat turns mostly to familiar faces. Evanescence, System of a Down and Coldplay all make repeat appearances as tune sources. Imogen Heap's Hide and Seek sounds a lot like the original, and like Transit's one-off from not too long ago, though Off the Beat has a lighter texture that I think suits the song's built-in computerized blend. There's a Kelly Clarkson number to showcase Rina Goncalves, this year's candidate for powerhouse female lead, and Off the Beat even tackles a song by role model alum Gabriel Mann, already a successful working man and, with any luck, soon to be a big star.

All in all, it's been a good year for the UPenn faithful. Kenophobia should appeal to fans and newbies alike, with plenty of momentum for the group's now traditional modern rock sound.

"Kenophobia: fear of open spaces or voids." I don't see Off the Beat so much as falling victim to this phobia as ruthlessly eliminating its existence, thundering through the voids of "wuss-appella" like a freight train at full velocity.

Kenophobia is another notch on the belt for a group that would inspire more Schadenfreude for their continual presence among the BOCA/CARA elite if they weren't so consistently good. Off the Beat's latest album follows the mold of their last stellar outing, Float, in moderating a penchant for loud, screamy tracks with moments of melancholy and a sweeping anthem or two for good measure. I'm guessing we have Jason Ryterband to thank, as this is his second album at the helm as music director. Whatever it is, keep it up — it's both inspiring and scary that the last two years have seen OTB improve their consistency to the point where there's little left to critique. The alto wail in the opening of Imaginary, the soaring choruses of Lights and Sounds, and the spellbinding close to The Crowing where every group member seems to be yelping at full volume (in perfect harmony)...this is stuff that few if any other groups could pull off, even if they were packing the ammunition of slamming arrangements and versatile production that OTB boasts here.

It wouldn't be an OTB album without some kickin' solos, and Kenophobia is no exception. Will Green wins the Chris Martin-sound-a-like contest that just about every group out there entered this past year, making the requisite Fix You cover more effective than most I've heard. I also picked out Jason Ryterband's earnest emo on Sugar, We're Going Down, Angelee Mantecon's Evanescence cover, and the cock-of-the-walk duet on The Crowing, but this is splitting hairs; as usual, the benchwarmer soloists for Off the Beat could school most other groups' MVPs with their hands tied behind their backs.

At this rate, the only thing Off the Beat needs to worry about is how to score a hat trick next year with another great album. They can leave the anxieties to the rest of us.

Off the Beat's albums are beginning to sound alike to me. I criticized Float for being two halves — one half inventive musical splendor, one half formulaic Off the Beatisms. I complained that Burn Like a Roman Candle was irritatingly noisy. I groused that More Screaming was polluted with distortion effects and hyperactive backgrounds. And now, after listening to Kenophobia, my fourth Off the Beat album, I understand why I feel like I'm repeating myself:

While preparing to write this review, I was flipping through the liner notes of these four albums, looking at the group's personnel changes. The influence of individuals on Off the Beat's workflow is amazing; no other major group I know of is so dominated by its music director. Ethan Fixell has his name stamped on nearly half the tracks of More Screaming and fully half of Burn Like a Roman Candle. Nearly 60% of Float is credited to Jason Ryterband, while 70% of the tracks on Kenophobia bear his name.

I thought it odd: how can a group run so exclusively by one person, with a cast of singers that changes every year, in the notoriously trend-sensitive collegiate setting, manage to sound so similar to itself, album after album?

While Float featured some inspiring departures from typical Off the Beat fare and sound (Limp, Bedshaped, Let Go, Time and Time Again's intro, Forgiven, Time is Running Out), Kenophobia seems to be a return to the Off the Beat sound of More Screaming and BLARC. The group uses distortion; the "zh" attack; very prominent vp with a wet, pitch bending snare hit; women wailing on chorus backgrounds; and soloists that just flat out rock out. OTB brings over some of the female arpeggios that added depth to Float (Question!, Imaginary).

New on Kenophobia is the use of full English words and phrases to generate the rhythm guitar parts to many songs ("zho zha noh question zho zha system of a", pseudo-Latin gibberish in the bridge of Imaginary, "in the light turn on the sound you gotta now don't make a sound" in Lights and Sounds, "in da doh noh when we are one"). Using phrases to replace instrumental sounds isn't a new concept, but where OTB's syllables are mere tangential references, pronounced with consonants warping into each other, or incoherent, the effect is evolutionary. The ear tries to pick out each word while the brain attempts to piece them together. Adding a layer of actual meaning to the many layers of the "wall of sound" overloads the listener even more than usual — a clever technique that makes the "wall of sound" even more effective. Coherent, full sentences render the effect a little silly. Pressure's guitar lyrics sound forced because they are coherent thoughts ("oh the pressure you know how it's driven now she just wanna go she is better aloh").

Does Off the Beat's consistency in sound and song selection show commitment to the "OTB sound", or is Off the Beat in need of some new influences? It's hard not to concede that Off the Beat cranks out good a cappella recordings. It's easier to say that Off the Beat sometimes picks weak songs to perform (The Crowing, Pressure, some of this meandering emo). Now, after listening to four similar albums that feature a puzzlingly small pool of original artists, I can comfortably say to Off the Beat: it's time to get off the beaten path. My favorite tracks on Kenophobia — and all four OTB albums — are those least typical of Off the Beat. Off the Beat has the talent to be creative, to write original songs, to do more than simply rock hard, loud, and long.

It's time to shed the cenophobia, defined as fear of new things.