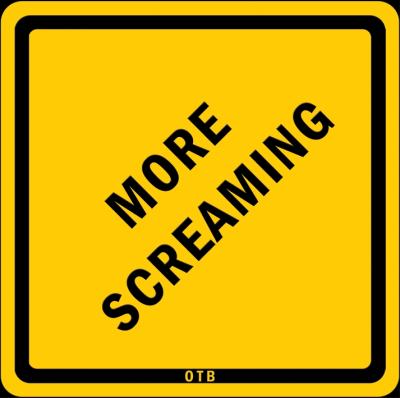 It took newspaper photos of a Swedish bombshell dressed like Debbie Harry for me to get this latest album from Off the Beat. I think it's a punk record, dressed up in the busy cadence of college a cappella.

I can't say for sure — I haven't had an insider's grasp of this group for years. Nonetheless, I find the new album endearing, and extremely flattering. After all, I helped name it. "Haha, yeah, I'm not gonna lie: The title is derived mostly from last year's RARB review," Ethan Fixell, Off the Beat's music director, told me in an email. "... we've been getting more and more criticism for our often 'non-a-cappella-like' singing and production. But to be honest, it only fuels my mission. As long as I get to arrange the heavy songs that no one else will touch, produce the album the way I want it to sound, and the group continues to sell records, I'm one happy dude."

I predict this album will sell a lot of records. The upfront promise of the packaging should charm even the biggest a cappella skeptic. It certainly delighted my local music expert — a concert violinist who cites Fritz Kreisler, J.S. Skinner and Son Volt among his influences — who insisted on listening to it immediately. Alas, that took us into less favorable territory. Local-music-expert and I had different reactions, but neither of us thought More Screaming quite lived up to its promise. Here's his reaction in a nutshell: "I hate intros.". He was particularly incensed that Aerials had 37 seconds of scene-setting before the words kicked in. To add insult to injury, he says, OTB dropped the ball on the big dynamic rollercoaster choruses, which he says should be the high point of the song.

I can't comment on the a cappella rendition of Aerials because I think it's lousy song in any format. But my tastes on this are no surprise; see last year's review. I can tell you this: no song on the new album packs the sonic punch of last year's Crawling in the Dark. This is a real loss, especially since this year's opener is one of the weakest tracks on the disc. No One Knows is a rock song with a doo-wop arrangement. Maybe they were going for a low-fi punk version, but the expensive rock production rules that out. Take It Off is much more successful as a punk number, and I think Fear also has a retro sneer that offsets the limpid tone of Sarah McLachlan's original. But I don't think a group this big will ever achieve the sparse feel of the best punk. Volcano Girls comes close at the beginning, but then the rest of the group and the fancy production kicks in and it's back to the OTB core sound.

More thoughts: Morgan McOwen showcases her sterling pipes again, this time in Christina Aguilera's Walk Away. Her upper register is stunning, but the lower notes in the verses seem out of her range and the periodic goofy electronic effects were a terrible idea. It's still a pretty good song, but she's led us to expect even better. Lilia Tamm's bland version of A Sorta Fairytale is nice enough, but lacks the oomph of last year's — there's no other word — screamer. Heart-Shaped Box is a great fit with OTB's current sound and production values. Oh, and the vocal percussion is pretty good; I liked the intro to In My Place.

Besides the title, there is one other reason to buy this disk: Bring Me To Life. It's brilliantly done, one of the best a cappella covers of the year. And hardly any screaming.

Both Off the Beat's admirers and detractors will find the title of their latest album, More Screaming, quite apt. Known for their energetic and edgy takes on the alternative pop-rock genre, they don't disappoint (or surprise) on that front. But unlike the past, their efforts left me a little less awestruck this time around.

Keeping with tradition, the women of Off the Beat belt out another set of impressive performances. Certainly the shining star is the incomparable Morgan McOwen, who gives us another tutorial on vocal performance with a passionate, riff-for-riff turn on Christina Aguilera's Walk Away and then changes it up with an ethereal and haunting version of Sarah Maclachlan's Fear. Also deserving of mention is Lilia Tamm's rich and plaintive solo on A Sorta Fairytale, undoubtedly the best I've heard from her over the past few albums. Jessie Schneiderman also turns in some great edge on Volcano Girls. Their male counterparts fare a bit less well; the wonderful Larry Kraut was wasted here on a vocal trifle (My Stupid Mouth) and the rest of the batch range from a stilted delivery of Coldplay to a number of heavily distorted, indistinguishable alterna-guy solos.

As always, production is extremely strong and there are a number of engaging arrangements here. While the tuning issues that have cropped up in the past appear occasionally, nothing too egregious jumped to ear. And though the OTB penchant for weird syllables and words in the block get overused at times (exhibit A: the painful guitar solos in No One Knows; exhibit B: the use of Sarah McLachlan's name in an otherwise impressive block for Fear), by and large these were capable takes on a number of difficult repertoire choices. Too difficult perhaps — I had problems truly engaging with a lot of these tracks; there is a lot here to be impressed by, but not necessarily a lot to love. This has always been a danger with OTB's in-your-face style and repertoire, but it severely impacted the ‘likeability' of this album. Which is why, unlike its precursors, More Screaming unfortunately fails to be much more than its title.

More Screaming is right — this is the hardest-rockin' a cappella album I believe I have ever heard. If you're not a hard rock fan, beware the caution sign on the album cover and steer clear. While More Screaming rocks harder and heavier than most a cappella on the market, Off the Beat crams too much of a good thing into many songs, nearly causing the album to overdose.

Off the Beat's musical basics are solid. The group's pitch is very good, except for sopranos that are just under the pitch in several songs, which mars blend slightly. The group's rhythm is steady, thanks in part to computerized percussion tracks. The album sounds rhythmically clean with precise entrances and cutoffs. Off the Beat fills its chords well, though a few songs are top heavy or feature soprano lines that linger on the root for too long.

Soloists are energetic and emotional, and the background singing generally matches their intensity. The female soloists are stronger than the men, showing a vocal maturity that the men fall slightly behind. The women charge their performances with colorful voices and great technique, especially during Walk Away and A Sorta Fairytale, both of which feature the tightest solo harmony recording I've ever heard. The studio miking for soloists is very good, doubling melodies or moving up close and personal for breathy intimacy.

The problems on More Screaming appear in the more complex musical jobs of arranging, interpretation and mixing.

First and most gratingly, in attempting a crunchy guitar attack to drive these hard rock songs, the group sorely overuses both distortion and the "zh" or "j" consonant. While the syllables after the "zh" are innovative, only two of fourteen songs on the album lack syllables that involve a dominant "j" sound. Most of those songs have distortion on at least one background vocal part. Mission accomplished: the guitars are crunchy goodness (particularly in Remember and the bridge of Volcano Girls), but hearing the same sounds song after song wears on the ear.

Second, Off the Beat has computerized the vocal percussion on many tracks using studio magic like snap-to and sample/sequence. While the drum kit sounds are realistic and clean, some samples are too long and overlap during snare rolls and double kicks. The percussion is too precise, too quick, and comes off sounding a little fake. More importantly, the VP is sometimes both very prominent in the mix and overly active (No One Knows, Remember, A Praise Chorus). It's just too much.

Third, Off the Beat's arrangements begin with very active backgrounds in the verses and build into even more complex choruses. Layering is a hallmark of big college groups, but a few songs are a little over the top.

Alone, none of these three chronic problems is enough to force this album to OD. However, Off the Beat has simultaneously applied overused distortion, repetitive syllables, computerized percussion, and hyperactive arranging to hard rock songs. The result is a sonic soup, with a garnish of grunge. The wall of sound rocks just a little too hard, so that many choruses get overcrowded, chaotic, and muddy. The end result is that half the album feels overdone.

Though More Screaming is musically solid, catchy, and jam-packed with hard drivin' rock, the album might have delivered more impact by focusing on sonic variety rather than lots of sound.