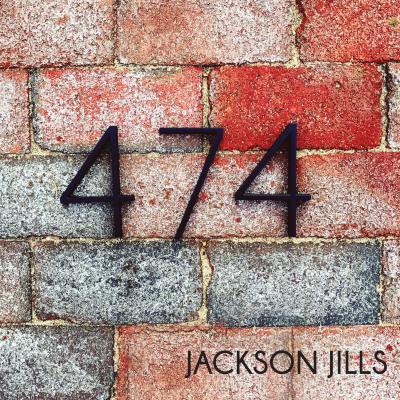 The Jackson Jills from Tufts University are firing on most cylinders with the group's recent multi-year release 474. It's definitely a mixed bag, but you get far more peanuts that raisins in this trail mix of a compilation. Several of the songs are sure to become classics in the female empowerment repertoire like the opener Unstoppable and the follow up Weekend. And then there are others that bring forth a Miss Saigon moment of why, God, why did they choose to record this song (I'm looking at you, Sweet Child O' Mine).

I have this grand thought to talk about consistency of sound throughout the years of the group — the disc spans the classes of '15, '16, and '17 — because I didn't look at who recorded what upon the first of multiple listens and I didn't even realize that it was multi-year (I probably should have because that's how the Jills roll, but still). On a base level, you can't really discern one class from another. And that's a good thing when you do albums like this. But, I would be lying because after looking at my scores and cross-referencing with track assignments, I strongly prefer the songs by the 2015-2016 Jackson Jills. There seems to be an extra oompf to most of their tracks. Arrangements, soloists, emotion, production ... just about everything we critique at RARB reached a zenith with those ladies. Granted, it's a very, very small mountain peak that they reached as the other iterations are nowhere near the valleys far below.

Soloists carry the brunt of the weight here. I can't really point to anyone in particular because I enjoy listening to all of them. If I had to go out on a limb and name one I like just a little more, I'd have to go with Evy Roy. She's got a versatile instrument covering everything from Adele to Nicki Minaj to the Zac Brown Band. WOW. Also, Rosie Quinn knocks it out of the park on Brandi Carlile's Wherever Is Your Heart —  Quinn's vocal ability and passion is certainly noteworthy.

What sinks the album the most are the arrangements. Oftentimes they come across as either juvenile or pedestrian, depending on your particular outlook. There are syllables used that were innovative in 2007 but will make the seasoned listener cringe in 2017. Sometimes spareness and hollowness in parts makes me wonder what they were supposed to do (or add in the studio) at this particular point. Bewilderingly, it's across all the classes. Where Are Ü Now / Talking Body is probably the most baffling and egregious. You'd think that these were the only songs in this mashup, but you'd be wrong because it's actually a six-song medley. The transitions between the songs are horrendous — full of abrupt stops and non-relational beginnings. But the overlays during each of the major portions of the songs are reminiscent of one of the greatest in the collegiate realm to accomplish this (Off the Beat).

I've been listening to the Jills for years. And since 2010, 474 is the fifth album that I've reviewed. Exposure and appreciation probably go back an additional 15 years. The Jills have never failed to impress even if they aren't always at their best. This is some strong work by the group and I believe you'll like it as much as I do.

The Jackson Jills have a long history of recording strong albums that consistently meet my personal "good" level. Since the Jills continue to record albums with different iterations of their group spanning a few years, it's always difficult to make a judgment about the state of the current group. But this focused album includes nine strong tracks from clearly talented women.

The group's cover of Hello is engaging and intense in a way I didn't expect. The arrangement moves seamlessly from soft and warm verses to intense repeating choruses. The strong, limber solo from Evy Roy isn't derivitave of Adele and feels right at home in her voice. I wanted to listen to her performance again immediately (so I did!). It takes a lot to match the power of Adele, but this track inspires different interpretations than the original. At the other end of the vibe spectrum is the Where Are Ü Now / Talking Body mashup, which actually includes pieces of six different pop or pop-adjacent songs, including pieces of tracks by Tove Lo and Nicki Minaj. It's bouncy and fun and really gets out of the rut of the traditional "cram everything into one song for no reason" mashup modus operandi.

The one disappointing track on 474 is the tired Sweet Child O' Mine cover. Although it isn't credited, the arrangement sounds essentially like a transcription of the 1998 Sheryl Crow cover. Unfortunately, there is nothing compelling in this recording that makes it worth including on this otherwise well-selected album. The tempo drags, and there is little that is reminiscent of the power or overdramatic emotion of the original song.

Despite this one misstep, the Jackson Jills have a strong album that shows their serious musical capabilities. If you want a peek into the current state of a cappella at Tufts, this album will give you a good sample of that talent.

474 is just the right example to show that all-female voices can create a strong soundscape; the lower voices anchoring the tracks here aren't a limitation. Also, the ladies are able to maintain their sound despite several eras of Jackson Jills recorded on this album. Though what I really love about 474 are the moments where soloists are highlighted while the background vocals and vp do their own thing without outshining one another.

The Jackson Jills pack this album with an interesting mix of song choices and quite strong performances. Unstoppable launches as the opening track and I haven't been able to stop replaying this song for days. Nadine Shen Molesky's solo performance is heart-capturing, just enough to portray a Sia song. Next comes Weekend which sounds like a Pitch Perfect track — it makes me wonder how the Jackson Jills sing it live, but the recording is a perfectly-captured output of what these girls are capable of. The medley track Where Are Ü Now / Talking Body is also a grand mashup that is easy on the ears — this one goes to my favorites list.

Sometimes it scares me when an a cappella group sings an Adele song. Good thing Evy Roy is able to give justice to Hello. The Jackson Jills seem to take solo assignments quite seriously as they continuously impress the living soul out of me, especially Carolyn Flax in The Call and Evy Roy in Colder Weather.

I want to highlight a few tracks without or with minimal vocal percussion: The Call, Colder Weather, and Let The Road. These tracks demonstrate the group's ability to create a wall of sound that is impressively well-blended and doesn't overlap each voice's spotlight.

474 is a product of hard work, and it takes a lot of talent, dedication, and sweat to produce such an excellent album in a span of three years without a hint of difference in the group's sound. A cappella groups (and fans) should take note of this album.