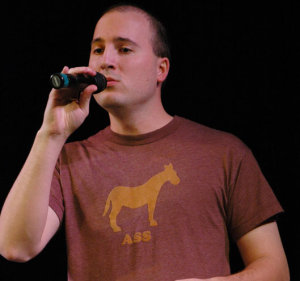 I started down this a cappella path of no return when I decided to attend Elizabethtown College and audition for the all-male a cappella group on campus, Phalanx. My time with Phalanx was — without a doubt — one of the highlights of my life. As music director, I took Phalanx to it's first-ever appearance in the ICCA competition, and garnished a 2000 Contemporary A Cappella Recording Award (CARA) Nomination in the Best Male Collegiate Arranger category for my work on Phalanx's third album, "Vision". I am forever indebted to all of those that crossed my path during those four wonderful years of collegiate a cappella. After college, I moved to Philadelphia, PA and immediately started a semi-professional group called Scuba Steve. We Scuba Stunk ... and after five short months we parted ways and began to work on other musical projects.

In the fall of 2002, with my a cappella motivation back in full swing, I set out on a quest to start a new vocal band in the Delaware Valley. With the help of five great guys, we established Lunatic Groove as the premiere vocal band in the Philadelphia Area. Throughout the next three years with the Groove, I was given the opportunity to peform at many venues up and down the East Coast, including SoJam 2004 in North Carolina. I was once again nominated for a CARA Award in 2005 for my song, "Let Me Ride", in the Best Contemporary Pop/Rock Original Song category.

Throughout all of this, I was a reviewer for RARB from 2000-2004. RARB is — in my opinion — one of the cornerstones of the a cappella world. It has brought endless public exposure to our artform and has been an innovative leader in how we connect with each other over the years. I truly miss being a RARB reviewer, and hope that someday, when scientists discover a way to have more than 24 hours in a day, I may be able to resume my duties.

I left Lunatic Groove in 2005 to focus on my business career. I am currently a Senior HR Technology Consultant and Sales Leader for the larget global HR consultancy, based in Philadelphia. In the Spring of 2009, I completed my MBA (Masters in Business Administration) at Arizona State University. I got married in July 2006 to the most wonderful woman I've ever met, and we built a home in 2007 to share with our now five-year old dachshund, Austin. On May 12, 2010, I became a father for the very first time to our beautiful daughter, Molly Hope.

I am an active ICCA judge in the Mid-Atlantic Region each year and continue to purchase countless a cappella albums that blare repeatedly from my car stereo. I'm an a cappella addict, and I'm quite positive that won't ever change.