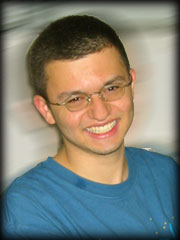 My singing career began at the age of six when I provided vocals on commercials for Zeller's department stores, Domino's Pizza, and an obscure Canadian toy that ended up being banned because it was unsafe. Eleven years later, with countless piano lessons and chorus rehearsals under my belt, I arrived at Columbia University, intent on joining an a cappella group. My auditions for the existing groups on campus proved unsuccessful, but a certain insane grad student decided to form a new group out of the people whom he met at callbacks. This ragtag bunch soon became Nonsequitur, and, much to my surprise, I soon found myself directing the group, a position I held for the first seven of the nine semesters I sang with them. I miss college a cappella tremendously, and I now get my singing jones out in the Zamir Chorale of New York, a world-famous semipro choir focusing on Jewish music.

I am also a fledgling audio engineer. Nonsequitur's first CD, on which I am acting as primary producer and engineer, is having a troubled birth, but hopefully we'll have some clips available soon for you to hear. I used to write music for radio and TV commercials, but alas, those days are over.

Nonmusical interests? I'm a major political junkie and a passionate devotee of C-SPAN, The New York Times, and the more moderate hosts on Air America Radio. Tell me where you live and I can probably name your Congressional delegation from memory. I adore reading, thinking, and theorizing about why people and societies act the way they do. I'm a wannabe gourmet chef, but lack of time and money keep me from nursing that interest as much as I'd like. I'm an occasional journalist and long-inactive actor.

I'm currently 22 and wrapping up a bachelor's degree in ethnomusicology. I live on the Upper West Side and spend my Sunday mornings directing the choir at Bergen County High School of Jewish Studies in Paramus, New Jersey. I have absolutely no clue what I want to do when I "grow up," but if you're my age and you do, you're probably wrong. In the meantime, writing for RARB is a pleasure and an honor.